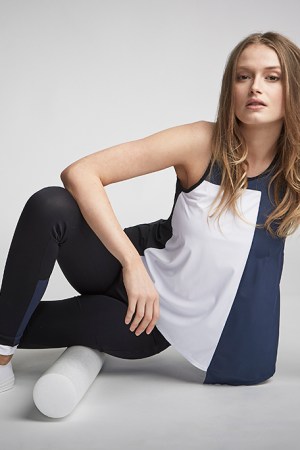 Barbara Benenson Warren, cofounder and former creative director of White + Warren, is back in the fashion game. She has launched a new luxury activewear line called B3.0 for fall selling.

Warren left White + Warren, a company known for its cashmere sportswear that she cofounded in 1997 with Susan White, in 2008 to spend more time with her family and explore new ventures. After seven years away from the industry, doing various projects, exercising and spending time with her children, now 18 and 15, she has returned to the industry with a more active concept than what she was doing previously.

Combining luxury pieces with function, B3.0 features studio-to-street dressing for women whether they are working out, playing tennis, running errands or meeting friends. The collection will launch this fall at retailers such as Carbon38, select Equinox locations, Bandier, Joan Shepp, and the brand’s own e-commerce site, B30active.com.

Warren, founder and creative director of B3.0, will offer four collections a year: fall, pre-spring, spring and summer. The line is being shown at the Hatch showroom at 10 Crosby Street in SoHo. She plans to show the collection at Capsule in September.

B3.0 includes comfortable workout basics, tennis gear and a newly reimagined tracksuit with a modern cut. Designed in muted colors such as graphite, slate, winter berry, black, white, pale putty and midnight, the line is made of performance fabrics. It includes coordinating cashmere knits designed to layer with any piece in the collection. About 20 percent of the line is cashmere, which reflects back to Warren’s knitwear days.

Warren said the concept stems from a deeply personal and inspiring place.

During her time away, Warren said she was taking care of her physical self and seeing what “daytime people” were wearing. “I became one of them,” she said, describing the routine of working out in the morning, going to school [for drop-off], going to meetings, PTA, lunch, doctor’s appointments, working from home. She found that the women were not decked out in designer outfits, but rather Lululemon pants, tank tops and a jacket or sweater. “I started to curate a version of it,” Warren said.

She said she owned all these White + Warren sweaters, hoodies and tunics, and was buying Adidas tracksuits and Nike leggings and putting them together to create a look with more fashion. “It was a street-y and cooler look,” she said.

Warren said she wasn’t actively looking for backers, but met someone in the activewear market in Taiwan and Shanghai, and the owner of that company, Tex-Ray, came to New York and Warren did a presentation. He immediately was interested in backing the business.

Fast forward to today, and B3.0 has become a reality. The hangtags carry such sayings as B Positive, B Comfortable, B Active, B Wise, B Focused.  Asked where the idea of 3.0 came from, she said three is her lucky number and it’s part of her philosophy on life.

Warren sees her life divided into three distinct phases: young adult years, ascending adulthood, and the years of mature and distinguished experience. “I am now in that third phase, a time of many changes, which I know other women are experiencing,” she said. “We have achieved a great deal from our careers. We have raised families, lived through emotional and physical changes, and are now asking ourselves, ‘what’s next?’ I consider this phase to be my version 3.0 and I am eager to share my passion for functional activewear and stylish ‘after wear’ with other women, whether in this or any other exciting phase of life.”

Warren said she’s also writing a book about 3.0. She also sees the B3.0 concept expanding into other categories.

“I would love to expand upon this. I’m keeping it very streamlined at the moment. I don’t believe in making lines that are enormous. I’d love to get into accessories, shoes and bags,” she said.