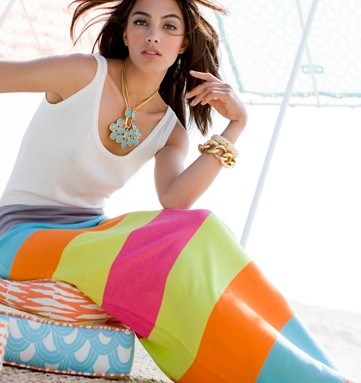 Trina Turk is about to hit the beach.

“We’ve been thinking of doing a store in the Hamptons for some time, but when this space became available just last week we decided to jump on it and rush to get it open by Memorial Day weekend,” Turk said of the 1,085-square-foot space, which is located at 79 Main Street. “People have been asking me to open in the Hamptons because our prints really do lend themselves well to the beach.”

In order to get it done in only two weeks, Turk said they are working quickly to gut the space, paint everything white and fill it with the designer’s collection of vintage patio furniture, which was all reupholstered in signature fabrics from the Trina Turk Indoor/Outdoor for Schumacher collection. The furnishings will be for sale, along with the designer’s collection of women’s sportswear, swimwear and accessories. The women’s collection retails from $98 for a tank top to $475 for a trenchcoat.

Trina Turk men’s wear, which is only available in Turk’s Palm Springs store, will also be available at the East Hampton location. “The men’s line is available in very limited quantities since it really doesn’t appeal to every man,” she said. “It’s for a man who likes to wear color, let’s just put it that way.”

The walls of the store will be decorated with the work of artist Warner Baird, previously a graphic designer at Coca-Cola. His work in the store will consist of a series of one-of-a-kind pieces he created in the late Sixties and early Seventies, titled “California Girls.”

Turk said she plans to close the store in the winter with hopes to reopen it next spring. She declined to give volume projections.

“We’ll see what happens. If it does well, we’ll be back,” she said.