The retailer, known for its sexy edge, showed a tamer side last week by launching bridal at four flagships and online. 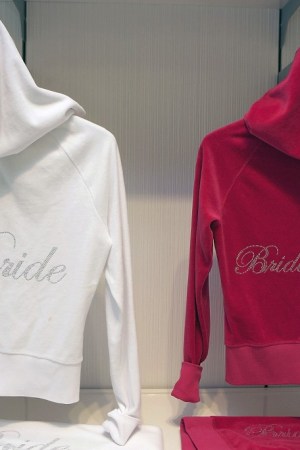 Bebe, known for its sexy edge, showed a tamer side last week by launching bridal at four flagships and online.

“On Facebook, we’ve never had a bigger response to any item or launch,” said Bebe Stores Inc. president Emilia Fabricant, who has been taking Bebe into some new fashion territory. “There were 17,000 likes on Facebook within the first 48 hours, 700 shares and 400 comments. Our customer is definitely engaged. Some of the sell-throughs are great, but it’s too early to give a full-blown account.”

The launch took place at Bebe’s Chicago flagship with more than 200 guests. “What was even better was that most of the women seemed actually on the hunt for bridal gowns and bridesmaids’ [dresses],” said spokeswoman Mary Hamilton. Bridal is also sold at the flagships in New York’s SoHo neighborhood, Rodeo Drive in Beverly Hills and Aventura, Fla. flagships.

Initially, Bebe showed 10 gowns in silk taffeta, silk satin, charmeuse, georgette, organza and chiffon, as well as accessories and a bridesmaid line. The gowns range from $950 to $2,500, and once ordered require 60- to 90 days for delivery. One hot item was the pale pink strapless A-line bridesmaid dress priced at $169, which needed to be reordered. Another strong seller was Bebe logo sweatshirts with the words ‘bride’ and ‘bridesmaid’ embroidered in rhinestone. According to Fabricant, women wear the sweats as they fix their hair and makeup prior to getting formerly dressed for the wedding ceremony. Bebe’s bridal assortment is designed by Rami Kashou.