The Belstaff brand, worn by George Clooney and Brad Pitt, has opened a showroom and plans to grow. 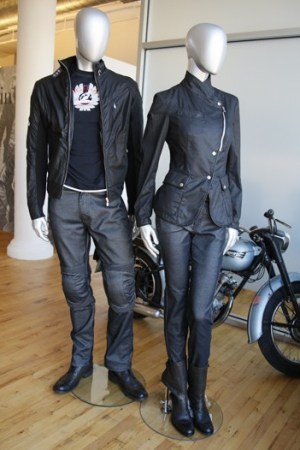 The Belstaff brand doesn’t fit neatly into one of its soft Ethel leather satchels.

The performance-oriented collection, born in 1924, was quickly adopted by motorcyclists. Belstaff in the Thirties used its fabric technology to serve aviators. Today, the hard-core Pure Motorcycle line has an enthusiastic audience, but accounts for less than 10 percent of overall sales. Belstaff’s message is: You don’t have to be a biker to appreciate the fabrics and craftsmanship, you can simply look like one. Jackets come in leather, wax cotton or technoquilt with extralight coverage to total protection. Men’s accounts for 75 percent of the business, but the company is exploring its softer side, too. “Women’s continues to be our growth focus,” said Franco DiCarlo, executive vice president and chief operating officer of Belstaff USA. “Women’s will get more distribution points. We’re a multidimensional brand. We have handbags, sweaters, boots, dresses, skirts and blouses.”

As part of its strategy to build U.S. sales, Belstaff in January opened a 10,800-square-foot showroom in Manhattan’s SoHo neighborhood.

By the company’s design, the brand is typically not sold in outerwear departments in department and specialty stores. “We sit very well in contemporary or designer departments,” DeCarlo said, noting that Barneys New York, Neiman Marcus, Saks Fifth Avenue and Scoop sell the brand. Belstaff can also be found in less obvious retail settings such as Earnest Sewn. In addition, Belstaff jackets are being featured in the J. Crew catalogue and Web site, including a women’s leather bomber jacket for $1,195. “Belstaff’s availability in J. Crew further validates our brand,” DiCarlo said. “Certainly, the relationship with J. Crew exposes Belstaff to a broader audience of consumers and we’re excited to reach them. We seem to be reaching a younger customer by default.”

Company-owned U.S. stores are going to be “a fundamental piece [of the strategy],” said DiCarlo. “Major metropolitan cities are a natural for us. New York is an important piece. We are evaluating it very closely.” Meanwhile, Belstaff is set to open units in Prague, Bucharest and Barcelona this year.

The company is careful to market its Pure Motorcycle performance collection separately to avoid confusion with the main line. PM is distributed in only one point of sale, DiCarlo said, the Web site Britishmotorcyclegear.com.

Jackets predominate the women’s assortment, but they’re not straight adaptations of men’s styles. Women have 16 blouson jackets to choose from, including a nylon Belflex and leather jacket with asymmetric zipper and double belts, $550. There’s a plaid wax cotton trench and a quilted wax cotton coat with fur collar and cuffs. From the Icon line, there’s the Amelia Earhart trench, $2,103, and bomber jacket, $1,798, which were designed for Hilary Swank to wear in the new film “Amelia.”

Belstaff runs with a top Hollywood crowd — George Clooney and Brad Pitt among them. Some styles come out of a movie and go into production, like the Amelia Earhart items and the Brad jacket. “He had a heavy influence on this jacket,” DiCarlo said of Pitt. “He told them what he wanted.”