Established venues are being joined by new exhibitions. 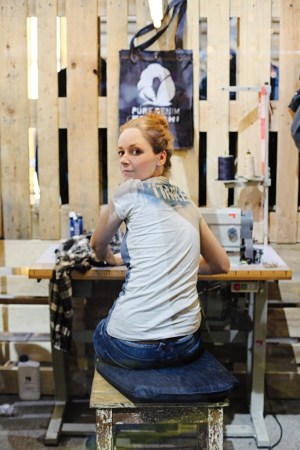 BERLIN — Trade show activity is continuing to build up in Germany for the second half of 2013, as Europe’s biggest single market will host the largest concentration of apparel exhibitions when Bread & Butter, Premium, Panorama — the new fair for more midrange brands — and nine other trade platforms, plus Mercedes-Benz Fashion Week Berlin kick off the spring season here in July.

Established and newer players report strong bookings and broader interest in the next round of events. The overall conditions in Germany remain promising, which is one factor behind increased international participation in Berlin’s trade show circuit. German consumers are the most optimistic in Europe, according to a recent GfK survey, and while rising fuel costs dampened their willingness to buy in April, consumers nonetheless feel the economy is improving, GfK said. So do German companies, as indicated by the IFO business climate survey, which improved in April for the sixth month in a row.

Germany’s apparel retailers had a rainy April, leading to flat or slightly decreased sales levels. However, “business had been good prior to that, and we hope that May is better weatherwise,” said Siegfried Jacobs, associate director of the German Apparel Retailers Association.

Jacobs expects a strong turnout in Berlin, noting, “The Berlin fairs have become very important, not only for the young fashion sector, but all the individualists, as well. With Panorama, we’ll see if the mainstream catches on.”

Bread & Butter remains Berlin’s heavy hitter — or “The Rock,” as the booked-out spring-summer edition will be called. Having introduced The Treasury for accessories and expanded L.O.C.K. with the Fire Station last season, founder Karl-Heinz Müller now wants to give denim a boost by turning B&B’s venue, Berlin-Tempelhof, into Berlin-Tempel of Denim, using the German spelling of temple. Though he acknowledged the denim market “is not so easy at present,” he nonetheless “believes in the next strong denim wave.” Plans are being finalized for a temple of denim with a denim-accented Zen garden either in the middle of or just outside the show’s Denim Base.

Within the temple, he plans a clear but not necessarily women’s blue jeans presentation for the likes of AG, Jason Denham, Closed and Seven For All Mankind, and perhaps women’s capsule ranges from the big jeans brands. He also wants to bring young designers together, as well as to reinstall the Laboratorio to illustrate the denim manufacturing processes. In addition, he’s keen to include a Japanese presentation and could imagine a program of speakers.

“Time is short, but we’ll pull it together,” he said.

Other B&B highlights include a Tom Tailor polo tournament and a Guess 30th birthday party.

Reinventing the contemporary mix remains Premium’s mantra, according to cofounder and director Anita Tillman. Accessories will now be split up, with a new area for jewelry and bags in Hall 2, and sneakers and sporty shoes in Hall 6, while catering has been moved, freeing up 5,000 to 8,000 square feet for upscale brands like Hotel Particulier or Georg et Arend in Hall 7. In addition, Premium expects to spotlight a group of Korean designers in a special section in July.

Seek, the urban style gathering also organized by Premium Exhibitions, will have two more floors to play with in its new home in the neighboring Kühlhaus.

“These brands are trendsetting because they ignore trends,” said Tillman of the 60 exhibitors, which include names such as Carin Wester, Folk and Our Legacy.

Also addressing the contemporary market are Capsule, Show & Order and The Gallery.

“The show has been gaining more traction and a lot of retailers who come to Berlin aren’t the same that go to our show in Paris,” said Edina Sultanik, a co-owner of Capsule.

Exhibitors will now number 100, up from 75, and Capsule is bringing “Above Treeline,” the new outdoor and mountaineering section that launched in New York this past fall, to Berlin this season.

“We’re seeing a lot of overlap between outdoor and fashion brands,” Sultanik said.

Now in its second season, Show & Order has added about 60 brands to its roster and will feature about 200 international labels, many of which don’t have showrooms in Germany.

The Gallery, the Igedo Co.’s show that premiered in Berlin in January, is bringing in more international names from France, Italy, Scandinavia, Austria, Croatia and elsewhere to its range of niche brands.

“We’re up by 10 to 20 percent and the demand is there,” said Igedo’s executive director-fashion, Mirjam Dietz, who noted the show of 85 exhibitors is looking for an expanded location in 2014. The Gallery Düsseldorf, slated for July 28 to 30, will present about 350 exhibitors.

Bright, the fair for boardsports, sneakers and other activewear, will open its doors to consumers for one day, setting up a market in front of its former Stasi Headquarters venue, as well as using the neighboring football stadium for sport demonstrations.

Green Showroom will be back in the Adlon Hotel, while Ethical Fashion’s 45 international sustainable labels will have a second hall at their disposal in Ewerk.

“We have quite a big fringe program,” said the organizer of both shows, Magdalena Schiffrin, including pop-up stores, a blogger event and press conference about new initiatives for sustainable cotton. Lavera Showfloor will also be staging green runway shows.

Berlin was not only supposed to be getting a new airport in June, but along with it a new trade fair for more volume-oriented brands called Panorama at the airport Expo Center in July.

A delay in the airport’s opening, announced just last week, has thrown a wrench into the proceedings, but the show’s chief executive officer, Jörg Wichmann, said alternative venues are being looked into and that he hopes to be able to announce a new temporary location shortly.

More than 200 brands, including Betty Barclay, Otto Kern, S. Oliver, Daniel Hechter, Apanage and Gin Tonic, had signed up for the show. Wichmann underscored Panorama Berlin will “happen as planned from July 4 to 6, 2012.”

Also debuting in Berlin this season: White Label, a sourcing platform presenting about 80 to 100 Chinese producers of women’s, men’s and children’s wear, plus accessories. As of January, the fair will be open to contractors from around the world.

With most fairs running July 4 to 6, parallel to Mercedes-Benz Fashion Week Berlin, the program is packed.

“There’s so much to see, three days is too short,” said BTE’s Jacobs. “In their own interests, retailers should spend more time in Berlin.”