Dresses were still a top category option, but this time they featured bold graphics and black and white as the new color combination of choice. 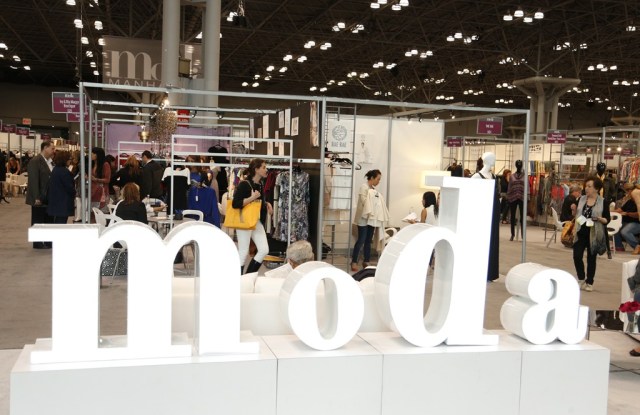 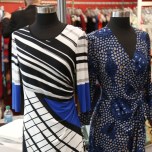 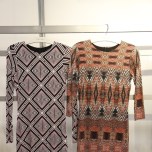 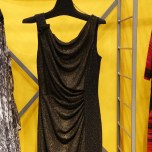 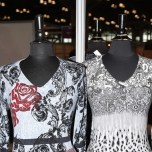 NEW YORK — Black and white is the new black.

That was the newest trend at the Moda Manhattan show last month at the Jacob K. Javits Convention Center and Pier 94, although there were signs that black was making a comeback compared with the bright color options in prior shows. Still trending for fall and holiday were pops of color — this time mixed with black — and graphic prints, only bolder than before. Some firms were still showing fabrications suitable for summer for boutique buyers, who often place orders closer to season, and for those buying for stores in warmer climates during the winter months.

At Donna Morgan, accounts executive Paul Greengos said, “The big trend is black and white, and pops of color as well.” He also showed a product line that featured what he called “graphic, architectural prints.”

Why the return to black?

“Black is easy on the shoe, and it’s a color that’s easily understandable at retail,” Greengos explained.

Dresses shown for Donna Morgan include a lace T-shirt style in black featuring a bow belt, a gray animal print and a black brocade that incorporated a lace treatment. One dress option in a graphic jersey print was primarily a contrast in black-and-white lines with a patch of cobalt blue at the hip and three-quarter-length sleeves and a band of bright yellow at the hem for additional eye candy.

The dresses wholesale on average at $69. Price points are two to two-and-a-half times that at retail.

At the Maggie London booth, which also does the London Times line, sales executive Amanda Gargano said, “Black and white is a big trend. The stores are looking for color and they like black and white.”

For color, think colorblocking, which is still trendy. Wholesale price points for Maggie London start at $44. For holiday, the dress that had the attention of some buyers was an illusion neckline with cutout details in black. Another was a black metallic jersey featuring a lace overlay.

Wholesale prices are lower for the sister line London Times, starting at $29. One noticeable difference between the two is the fewer details that are injected into the product line for London Times. That didn’t detract from the styling, nor the fabrications used in the line. The dresses featured shimmering fabrics with lace added for styling and interest, as well as flocked roses and burnout patterns.

At the Sandra Darren booth, the black-and-white combination was shown in a variety of ways, with textiles in its new bonded knits to different mesh illusion options. One was a white dress with black sides and the mesh illusion at the top of the shoulders. A little black dress gave the vision — at a distance — of a studded graphic design, but was really a laser-cut pattern that showed white underneath the black. Other dresses featured black-and-white plaid designs or flower patterns.

According to sales executive Gary Furey, fabric combinations using as many as three different textiles is also a trend for late fall and early holiday.

Similar styling was found at the higher-price sister line Julia Jordan, which targets the Saks Fifth Avenue, Nordstrom and Neiman Marcus customer. Colorblocking options were more noticeable in the premium line, as well as a greater degree of embellishments. One black-and-white dress design featured lace on top of white crepe.

The variation of colors used in the line shows “new ways to present the colorblocking concept,” Furey said.

Wholesale price points for Sandra Darren range from $49 to $69, while those for Julia Jordan are between $69 and $95.

Many of the selections were vests. Some were reversible and others were sweater-knit combinations. A short red, knitted fur vest was on display wholesaling for $109, while a longer olive option was listed at $159.

“The shorter vests go well with jeans, while the longer ones are dressier,” Far said.

At Metric Knits, sweater choices in bold graphics — mostly in black-and-white combinations — were the newest trends.

Sales executive Roni Brodherson said buyers were gravitating toward the graphic sweaters made from rayon, nylon and spandex. They average $55 at wholesale.

Marina Abayeva, account executive, said animal prints were still being bought by some stores, but it was the graphic prints that were gaining in popularity.

At Oro Denim, owner Ileana Oro said, “In Florida, they’re still big into color, but in the Northeast, the basics are coming back.”