Spring trends ran the gamut from bohemian and military looks to power dressing at Coterie, which ended Monday. 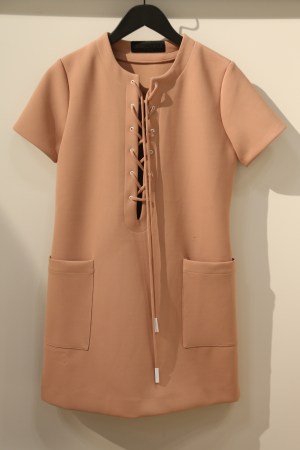 NEW YORK — Spring trends were in overdrive at Coterie.

The three-day show, which ended Monday at the Jacob K. Javits Center, featured ready-to-wear, accessories and footwear for spring 2016. The three levels of the exhibition showcased over 1,400 designers. The exhibition’s various sections included TMRW for up-and-coming brands; Active; Sole Commerce, dedicated to footwear and handbags; FWD for junior sportswear and accessories, and for the third season, Blue, highlighting denim.

Courtney Quinn, contemporary merchandising strategist at Doneger Group, observed a strong sense of movement, from soft to structured dressing, at the show. She cited a return to power dressing, particularly in the new suiting separates; an update to the matched set in solid, sleeveless blazers, and new cropped and flared bottom silhouettes. She also noticed a resurgence in denim — not just in bottoms — and a romantic bohemian sensibility, especially in silhouettes and fabrics. Heavy woven lace, eyelet and all-over crochet were evident in many lines, as well as off-the-shoulder silhouettes and peplum and flounce hemlines, said Quinn.

“Skirts have been hard to find, so this is a great new category for us,” said Siegal. She noted that Parker had fun silk tops and dresses with unusual detailing (open backs and additional straps). She also pointed to the laced-up detailing at companies such as Ella Moss, Monroe and Joie Soft, as well as Army green pants and shorts. Other highlights at Coterie were a starfish print from Sundry and a banana-embroidered print at Equipment, said Siegal.

Kiki Comerford, owner of Kiki Boutique and Jane Chalfant, based in Westchester, Pa., said she was looking for novelty knits at the show. “We try to find lines that are not in department stores,” said Comerford. She picked up a line called Volt at the show, which is a Canadian collection of novelty knits and dresses. She observed that wide-leg pants are making a comeback. Other lines she bought were Cullen, White + Warren and Margaret O’Leary.

Frankie Ponce, who was working the Molly Bracken booth in FWD, called it a good show. She noted that she saw a number of international retailers from Turkey, the Dominican Republic, Nigeria, Mexico and Canada. The line is focused on dresses, with a bohemian and feminine vibe. The average wholesale price is $20, and the company sells over 2,000 stores in Europe, including Galeries Lafayette. Spring will be the first season the brand will ship in the U.S.

Andrew Oshrin, chief executive officer of Milly, said the company was having a successful show. “It’s been a very busy couple of days. Our traffic has been non-stop,” he said. The company did well with a scribble print dress with cross-back and a modesty panel, as well as two-piece dressing, with a trapeze top or culotte, or slim skirt. It also did well with an off-the-shoulder sleeve construction.

Kendall + Kylie from Kendall and Kylie Jenner also had a busy show. Katy Miller, sales assistant, said the eyelet group was selling well, and a lace-up dress, which Kylie Jenner put on her Instagram, was popular. That dress wholesales for $67. The dress comes in white, black and sepia. The line will be carried in all major department stores, as well as Shopbop and Revolve, among others.

Ramy Sharp, owner and designer of Ramy Brook, was showing her new collections. She said Apres Ramy Brook, which is her ath-leisure line, was picking up momentum, and the company’s knits, including a cashmere poncho, were doing well. “The past two days were crazy. Today is a steady pace,” said Sharp on Monday. “Business has been great. Fall is selling well.” The brand opened 20 new accounts at the show, including 11 on the first day.

Bailey 44 has added a new elevated dress category. “Spring has been really good for us. Floral prints are doing well, along with laser-cut suede and leather,” said Melissa Dench, the firm’s senior vice president of sales.

John Eshaya, owner and designer of Jet by John Eshaya, said traffic was slow on Saturday because retailers want to be in their stores, and on Sunday, they want to be with their families. “People are super rushed to finish and go home,” said Eshaya on Monday. He was having success with two-piece dressing that looks like one piece and cigarette jeans, that are very “Grease,” and wholesale for $88. He said he saw a few new accounts, “but mostly our tried-and-trues. We have loyal clients, and sell a lot of specialty stores.”

Allen B. Schwartz, owner and designer of ABS Allen Schwartz, called the show “good, not great.” He was able to meet many overseas retailers from Greece, Peru and Japan, which was good for business. For spring, he introduced several dressy separates and panel skirts, with a car wash look. He also sees a resurgence of the sportswear blouse business. Another strong trend are flare legs in trousers. “People are looking for new trends. It wasn’t the same-old. If you didn’t have something fresh, it wasn’t getting anybody’s attention,” he said, adding it was up to his reps to make appointments and stay busy. “Hope is not a strategy,” said Schwartz.