Bold Color and Prints Reign at Moda and Fame

Exhibitors at both shows also nodded to vintage looks, while incorporating texture with luxe materials. 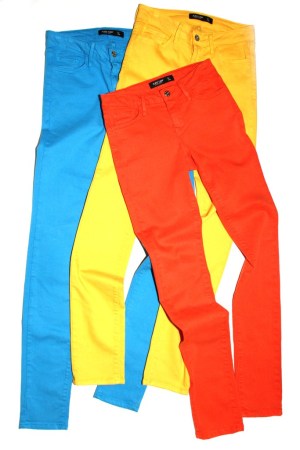 The immediate future looks bright, bold and filled with colorful prints, according to exhibitors at Moda and Fame.

The trade shows, which were held from Feb. 21 to 23 at the Jacob K. Javits Convention Center in New York, were teeming with dresses and tops in vibrant colors and patterns for spring, summer and pre-fall deliveries.

Fall and winter looks were more muted, but incorporated knits and wovens for texture. As a result, buyers filled immediate orders, according to Britton Jones, president and chief executive of Business Journals, which runs the trade shows.

“Retailers, mindful of the lessons of the recent past, still purchased carefully and many, wanting to do the bulk of their buying closer to season, were not entirely ready to fully embrace the fall/winter season,” he said.

Be it for trend or to exercise caution, buyers flocked to booths with the most colorful and striking silhouettes.

Serving teens and contemporary shoppers, the 13-year-old brand favors fast-fashion looks at wholesale prices, ranging from $8.75 to $17.75. Despite the affordable price tag, Gi said the brand, which uses knits, wovens, satin and chiffon, has downplayed its use of jersey and spandex, as the prices of both materials have increased dramatically in China — where it manufactures the bulk of its apparel.

Manufacturing in the U.S., while more expensive, has helped Just USA, a denim brand that specializes in brightly colored jeans that retail for between $58 and $63, maintain quick turns. Instead of moving to China, the 27-year-old brand has remained in the U.S., a decision that has raised its prices by $5 to $10 per pant.

“Colors and pastels are doing really well,” said salesman Steve Lee, who pointed to racks of jeans that spanned the gamut from electric blue and brick red to marigold and lime.

Textured looks for fall set to a neutral palette also popped up at both shows.

Stella Carakasi, which showcased Euro-inspired looks for the contemporary and misses’ customer, said it has focused more on luxe natural fibers like boiled wool, alpaca, silk, Tencel and cotton metal sateen than color.

“We wanted to create something more wearable,” said salesman Allan Boutrous, who explained that the brand, which recently increased retail price points to between $80 and $400 to match the better materials, has rolled out colorful accessories like scarves, adding a bit of personality to the collection.

Meanwhile, at Petrunia, a brand inspired by dresses and coats from the Thirties and Forties, the focus remained on the silhouette and details such as stitching and piping.

With retail prices in the $175 to $250 range, the Ithaca, N.Y.-based Petrunia maintains “accessible” price points for its clientele, which includes area university students, as well as misses’ consumers, said co-owner Domenica Brockman.

“Fashion goes through phases,” said Brockman. “The Sixties and Seventies have been popular, but now we’re going to see the influence of shows like ‘Downton Abbey’ and the movie ‘The Artist.’”