From Louis Vuitton to Nike, fashion companies have designed stacks of products related to the FIFA World Cup. 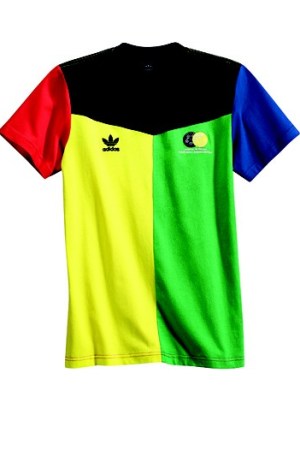 Way before the official kickoff on Friday, fashion and sports companies got the ball rolling with a string of products related to the FIFA World Cup in South Africa.

South Africa versus Mexico will inaugurate the tournament of 32 teams. The opening concert, billed as the largest entertainment event to ever take place in Africa, is slated for Thursday night in Johannesburg. Among the artists slated to hit the stage are a Roberto Cavalli-clad Shakira, the Black Eyed Peas, John Legend and the Soweto Gospel Choir.

Given the tournament is considered the world’s largest sporting event, it’s no surprise companies are tapping into the buzz. Even smaller brands are supporting the Italian team with Italia Independent, Lumberjack, Carlo Pignatelli and Gherardini fashioning green, white and red shades, boat shoes, a watch and a shopping bag, respectively.

Meanwhile, commissioned by FIFA (Fédération Internationale de Football Association), Louis Vuitton created a special case handmade by one master craftsman in the company’s 151-year-old workshop in Asnières, near Paris, to house the solid, 24-karat gold trophy with malachite detailing that will be given to the winning team.

Giorgio Armani, who in the past has dressed the Italian national team and the Chelsea squad in England, and whose clothes are regularly donned by players like Cristiano Ronaldo, Luis Figo and David Beckham, created a special World Cup collection of men’s accessories for Emporio Armani. The selection includes a weekend bag, a black or white belt and sneakers, T-shirts and boxer briefs with a detachable flag logo that can be customized depending on one’s allegiance.

For the fourth year, Dolce & Gabbana is outfitting the Italian national team, this time with a navy blue two-buttoned suit with spear-headed lapels over a white shirt, a four-button waistcoat and a jacquard tie. A quilted trenchcoat completes the look, as do aviator-style shades with the Italian flag on the hinge.

The designers also dedicated a portion of their gym and underwear collections to the soccer event with briefs featuring the word “calcio,” or football, on the elastic, while the more sporty part such as tracksuits, hoodies and shorts bear the Italian flag. The products hit the Dolce & Gabbana boutiques in mid-May.

“When we started designing the uniforms for the national team it was because we wanted to export a full Italian message and, through the uniforms, we wanted to communicate the idea of elegance, passion and uniqueness through a sartorial suit, a gilet and a white shirt,” said Stefano Gabbana.

Added Domenico Dolce, “Soccer players are role models and idols that people like to imitate, but this project stemmed first and foremost from our passion for soccer. ”

Strenesse continues to supply off-field uniforms for the German team, with the formal outfit a dark blue sport coat, and coordinating shirt and tie, while the informal attire this season will include a medium-blue lightweight corduroy jacket, khaki cotton pants, a slim-fitting cotton shirt, colored polos, a cashmere sweater and additional trousers.

“It’s a privilege to be able to [outfit the team], for it’s rare to find such an image and advertising medium in Germany,” contended Strenesse chief executive officer Gerd Strehle. “We had the luck to begin [our involvement] with the restart of the German team.” The team had previously been dressed by one company for 20 years, Strehle noted, “but the team and the management wanted a new feel and it was our chance.”

Naturally, activewear companies like Nike, Adidas and Puma have a plethora of World Cup related kits, accessories and jerseys, as well as a flurry of lifestyle product launches. Adidas, which will outfit 12 teams at the World Cup, is “convinced it will achieve over” its 1.3 billion euro, or $1.7 billion, target in sales of soccer-related products this year, according to ceo Herbert Hainer.

Puma, which will dress seven teams at the soccer tournament, said it saw a double-digit increase in team sport sales. That performance is thanks to World Cup-related collection, including replica soccer jerseys and a soccer-inspired lifestyle collection designed by New York-based artist Kehinde Wiley. Jochen Zeitz, Puma’s ceo, said he expects the bulk of World Cup gear will be sold in the second quarter.

Among other European brands, Tod’s commissioned its artisans to braid a selection of colored leather bracelets to reflect all the national teams’ colors that retail for $225; Diesel will host eight World Cup-themed parties with a fashion angle in Johannesburg, Durban, Pretoria and Cape Town; Fred Perry has created 12 tournament shirts, each featuring a participating country’s football colors and name underneath the Fred Perry laurel leaf logo; French Connection has produced a collection called Football Legends featuring three shirts with black-and-white photographs of the legendary soccer players Pelè, Bobby Moore and George Best at $36 each; British retailer Burton has soccer-themed socks, underwear, flip-flops, T-shirts and polo shirts, as well as two limited edition T-shirts and wristbands in the England colors of red and white, and Ted Baker has created a retro-inspired collection of classic boxers, socks, T-shirts and sneakers.

German giant Hugo Boss has introduced 11 nationally color-coded polo shirts and caps for men and women, while the German men’s, women’s, juniors and children’s label s.Oliver has special edition Peanuts T-shirts for kids as part of its cooperation with the children’s charity Ein Herz für Kinder (or A Heart for Children), while adults can opt for themed QS by s.Oliver tops or “Cotton Made in Africa” T-shirts in the s.Oliver Casual women and men and s.Oliver Junior ranges. There’s also a soccer-themed charm bracelet on offer. For more luxury-oriented soccer enthusiasts, German cashmere producer Allude is offering a World Cup sweater for men and women. Creative director Andrea Karg said Allude’s involvement was sparked by “the pure joy of the World Cup — so just for fun.”

“Now all we have to hope for is a great tournament,” said Armani.