Seven years after bringing Thom Browne on board, the retailer has turned its attention to women’s wear. 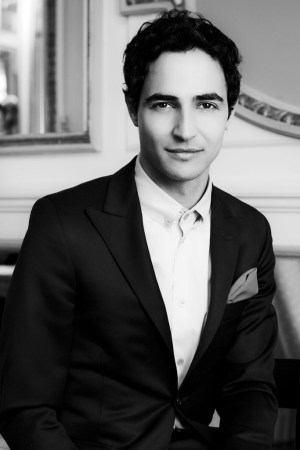 Seven years after bringing Thom Browne on board to design a more fashion-forward collection, Brooks Brothers has turned its attention to women’s wear, hiring Zac Posen as creative director for its mainline women’s collection and accessories.

In this new position, the 33-year-old designer will oversee the retailer’s current design and merchant teams and will also work on brand development and presentation for the women’s label. He will continue to design his own women’s collection that was launched in 2001, and will move forward with his other ventures, which include serving as a judge on “Project Runway.”

“We want to better ourselves and have another point of view,” Claudio Del Vecchio, chairman and chief executive officer of Brooks Bros., told WWD. “We already have a team in place, so he’s not going to be a designer, but a creative director. He’s someone we trust and admire for what he does, and he can add to what we’re already doing.”

Brooks Bros.’ women’s wear accounts for around 20 percent of the company’s $1.2 billion in annual sales, a figure that has remained constant for quite a few years. In the past few seasons, the women’s offering has been updated and enhanced, a process that began after Del Vecchio bought the company in 2001.

“The product today is better than it is perceived in the market,” he said. “I think women are pleasantly surprised when they come into our stores.”

Not as many women come into the stores as Del Vecchio would like.

The addition of Posen, whose first collection will hit stores worldwide for spring ’16, is expected to spark interest in the product and draw customers. His name will not be on the merchandise, and he will not be involved in Red Fleece, the retailer’s younger-skewed collection, or Black Fleece, which is designed by Browne. But Del Vecchio said Posen will “represent the company” in the market and “like anybody who works for us, will express his opinion” on product and presentation.

When Del Vecchio hired Browne to design Black Fleece, he admitted that it was “a p.r. move.” But on Thursday, he stressed that he does not view Posen’s addition in the same way.

“This is our main women’s collection, and if I didn’t think he could deliver, I wouldn’t risk it,” Del Vecchio said. “It’s not for p.r., but he’s a celebrity and I fully expect to get plenty of coverage and create traffic. But this is a business decision.”

He said he believes Posen is “one of the most talented and influential American designers working today. As soon as we met, it was clear to us that he had a true understanding of our brand and its 196-year heritage as well as the creativity to modernize our offerings within the category,” he added.

Brooks Bros. began selling women’s apparel as early as 1874 when the store at Broadway and Bond Streets opened a special department catering to female customers. In 1949, a pink oxford shirt was featured in Vogue magazine, but it wasn’t until 1976 when the retailer opened a complete women’s department.

Del Vecchio declined to say how large he would ultimately hope women’s wear could be for the company, noting he didn’t want to “reduce the penetration of men’s wear” in order to bolster women’s. “But we want to make it as good as can be. Our goal is not to revolutionize the business, but add some nice things — and the PR will definitely help.”

He said waiting until spring ’16 to launch the first line with Posen indicates that Brooks Bros. “is not in a hurry. We expect he will contribute, but we have to give him the time to do it the right way.”

Del Vecchio said it was premature at this point to discuss how the sensibility of the line could change under Posen’s watch, adding that it is “too early to talk about the details of the product.”

A New York native, Posen grew up in the creative environment of Eighties SoHo, making friends with Claire Danes and Lola Schnabel and even babysitting Lena Dunham. This eventually led him to fashion, and in 2001, he launched his own label, practically garnering buzz from the get-go with his proclivity for ultraglamorous gowns, his photogenic looks and television-ready personality and friends like Sean “P.Diddy” Combs, who would also invest in his business.

Posen’s aesthetic plays into the notion of vintage American Hollywood glamour with a focus on sharply tailored silhouettes. He often cites Charles James as one of his inspirations, which comes through in the designer’s draped and heavily constructed gowns destined for the red carpet. First Lady Michelle Obama, Uma Thurman, Gwyneth Paltrow, Christina Ricci and Naomi Watts are among those who have worn his designs for public appearances.

Over the years, Posen has been challenged to grow his business to a level that matches his recognition, which the current management, including ceo Susan Davidson, has been looking to address via brand extensions such as Zac Zac Posen, which skews contemporary, and Truly Zac Posen for David’s Bridal. The main collection is wholesaled at Bergdorf Goodman, Neiman Marcus, Saks Fifth Avenue, Barneys New York, Harvey Nichols and Seibu. Recently, Posen has had another boost in interest as a result of the “Charles James: Beyond Fashion” exhibition at the Metropolitan Museum of Art, highlighting a sartorial aesthetic the designer is comfortable with.

In September, the designer will relocate from his longtime home in the TriBeCa/Chinatown area into 15,000 square feet at 3 East 54th Street in Manhattan.

Posen said he was “honored and excited to be embarking on this incredible opportunity to take the Brooks Brothers women’s brand into the future while respecting its deep, rich American heritage as an institutional company.” He was filming “Project Runway” on Thursday and unavailable for further comment.

When Black Fleece was first introduced, it experienced some growing pains. But Brooks Bros. stuck with the concept, working with Browne to enhance the commercial aspects of the collection, and today, it is considered a success. There are also two freestanding Black Fleece stores in the U.S. — New York and San Francisco — as well as two in Asia.