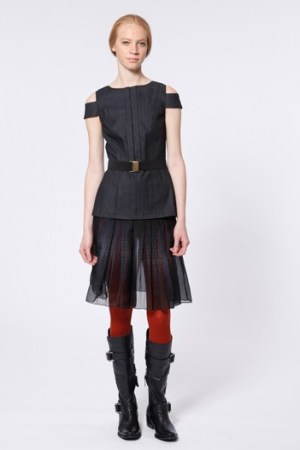 According to industry sources, Bergdorf Goodman and Saks Fifth Avenue have dropped the line for spring, and Neiman Marcus, which had picked it up in over 30 stores, has reduced its number of doors to single digits.

In addition to the major retailers, Lavender’s specialty store distribution is said to have been radically reduced for spring.

Part of the problem, according to sources familiar with the situation, was that the line, positioned at the upper end of contemporary, was too expensive for the category, an issue exacerbated by the dismal conditions at retail in the past few months. The line retailed from about $200 to $800.

Industry observers noted that Lavender had taken a much harder aesthetic under Constance Darrow, the former president of Prada in the U.S., who joined Vera Wang as president of creative direction last spring. They said the line lost some of its happy, light spirit and had become less suitable for the contemporary environment.

Reached on Friday, Wang conceded the line’s business had contracted, and said she is rethinking Lavender. That could result in a new pricing strategy, and the designer disclosed she is in talks to possibly license the label but wouldn’t disclose names of potential licensing partners. “Going forward, there is talk of a bridge line as well,” she said.

Wang launched Lavender for spring 2005 as a line of cocktail and evening dresses for dress departments, but repositioned it for spring 2007 as a contemporary business replete with separates. The contemporary area was booming at the time, and Wang aimed to bring a distinct designer aesthetic to it, picking up on her signature artsy aesthetic at more approachable prices than her main designer line. The line rapidly grew to over 400 doors and was estimated to generate over $50 million in wholesale volume.

“We were going with where we thought the business was,” Wang said. “I didn’t just hope for it to be a resource, but I wanted it to make a statement every season from a creative point of view.” She conceded that with the downturn in the economy, “We were in some cases overpriced for the landscape of contemporary.”

She added, “For us, we are taking this as a good time to rethink what Lavender is, could be and will be. There are some other possibilities on the horizon on how we morph Lavender.”

Wang will continue to deliver the line during the restructuring. While Neiman’s has not yet ordered the line for fall, Bergdorf’s will pick Lavender up again for fall. Sources also indicated that while Saks dropped Lavender, Wang is working with the specialty retailer on an exclusive new label for Wear, Saks’ recently unveiled, reinvented bridge floor, which could launch as soon as this fall.