The three-day show featured 1,490 exhibitors, up 10 percent from a year ago. 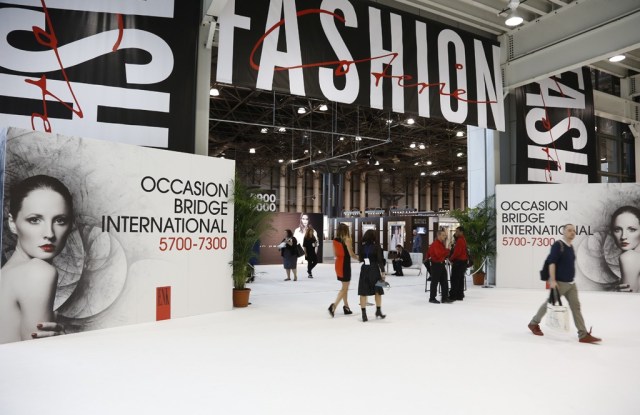 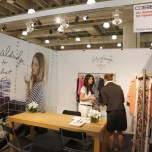 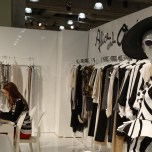 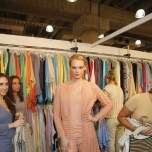 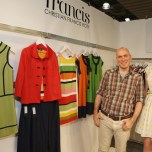 The three-day show featured 1,490 exhibitors, up 10 percent from a year ago.

“We look for novelty. We don’t go too deep into any one line,” said Fran Magnus, buyer and store manager of A Nose for Clothes, a women’s specialty store in Miami, which is part of a six-unit chain. She said she was searching Coterie “for those niches of product that enhance our presentation.” She liked the novelty items she was seeing at Velvet, and a few of the pieces in the Lily Aldridge for Velvet collection.

Jacqueline Guizol, owner of France Ameriques, a women’s specialty store in Madison, Conn., said she was buying pants from Avenue Montaigne. “Those pants, I can’t keep them in my store,” she said. “My customer buys three at a time.” She was referring to the Venezia pull-on ankle pant with a side slit, which wholesales for $80. “It fits everybody,” she said. She was also excited about the longer shorts called Novello, which wholesale for $72. “Our customers love it. I will carry more of those shorts. It’s very hard to find natural, good fibers.” Avenue Montaigne manufactures its entire line in New York City. Other lines she was buying at Coterie were Escorpion, a Spanish collection, and Zyga, a French line.

Ayellet Rubinstein, owner, and Carol Hackett, manager and buyer, of Footloose, a 4,000-square-foot women’s apparel and footwear store in Pittsburgh, said they were seeing a lot of collections they would purchase at the show. “Theory looked amazing, and Milly looked great,” said Rubinstein. She was also excited about Diane von Furstenberg. Hackett noted that she saw a lot of strong denim lines, such as Hudson and True Religion. “The denim companies showed innovative textures, patterns and colors,” said Hackett. She was also seeing a lot of army jackets and pastels, such as peach and lavender, in jeans. She liked the army jackets at Theory and Joie, as well as the shorts, in all the textures, patterns and lace.

Adrianne Weissman, owner of Evelyn & Arthur, an eight-unit women’s specialty chain throughout Florida, said, “We love Minnie Rose, especially the beautiful colors. The fabrics are great.” She was pleased the company was launching coordinating jeans. “It [Minnie Rose] is very popular with our customer. We get the daughter, mother and grandmother, and you can outfit them all with something,” said Weissman. Other lines she was buying at Coterie were pants by Lisette and Ecru, and a sweater line, Lisa Todd. She also liked the blouses at Clover Canyon. “They have great, really fun prints,” she said. She also liked the blouses at Finley Shirts and the crinkled printed leather jackets at Beluva.

“It’s been unbelievable,” said Lisa Shaller-Goldberg, founder and creative director of Minnie Rose. “It’s probably our best show ever. Pants have been phenomenal.

“Everybody’s buying them in every color,” said Goldberg, noting that the new pants wholesale for $90 and come in such colors as black, buttercream, green tea, lavender, mint, rose gold and white.

Among the new lines at the show were Lily Aldridge for Velvet, which consisted of 14 different styles and numerous colors. The line will be sold in such retailers as Bloomingdale’s, Nordstrom, Curve, Planet Blue and Louis of Boston. ABS Sportswear was also launching for spring. The contemporary line is licensed to Corwik. “It’s advanced contemporary styling at an opening price point,” said Ayal Twik, president. The line, whose average wholesale price is $85, is an extension of the dress business that’s already been established.

Gail Cook, international wholesale strategist of Pink Tartan, said the Canadian-based firm was picking up a lot of new business at the show. Known for its power stretch, the line includes dresses and sportswear. “It’s a great traveling fabrication,” said Cook. The company, which sells at such stores as Saks Fifth Avenue, is looking to open a store on Madison Avenue. “It should happen in the next six months,” said Cook.

Rebecca Minkoff was seeing demand for its apparel, handbags, footwear and jewelry. Uri Minkoff, founder and chief executive officer, said the company was launching jewelry at Bloomingdale’s in late September. He said Rebecca Minkoff has been doing well with outerwear and dresses, as well as jackets and leathers. “Prints have been a key category,” he said.