After seasons of playing it safe, buyers were devoting more of their budget to new lines and unique merchandise. 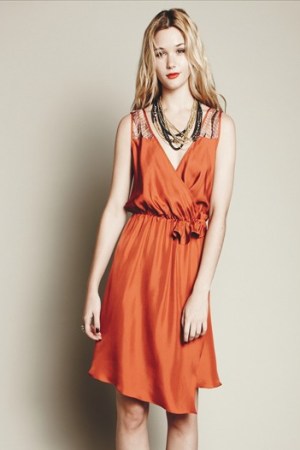 LOS ANGELES — After seasons of playing it safe, buyers at the recent Los Angeles market reported they were devoting more of their budget to new lines and unique merchandise to put consumers in a shopping mood.

At the four-day market, retailers — ranging from Holt Renfrew, Nordstrom, Belk and Dillard’s to Kitson, Diane Merrick and Boulmiche — visited the showrooms housed in the California Market Center, New Mart and Cooper Design Space to shop summer and pre-fall collections. The market also featured the trade shows Designers & Agents and Focus, as well as a new entry called Select, which took over the California Market Center venue vacated last year by New York-based Brighte Companies. Store owners and buyers largely described business as decent or good during the holiday season and early 2011, but sales improvement didn’t translate into an ordering surge.

“We are planning for pretty flat, although this year we had [sales] increases,” said Rosalie Rosenberg, owner of and buyer for Bodhi Bazaar, a contemporary women’s store in Santa Fe, N.M., of her ordering strategy. “We don’t approach it in an anxious way.”

While manufacturers have been discussing cost pressures that could lead to wholesale price increases, most retailers didn’t think prices in stores would shift much. “I didn’t really notice,” said Tia Kurtz, owner of women’s clothing boutique Cottons in La Conner, Wash., when asked about an elevation of wholesale prices. “It doesn’t seem like things have changed dramatically.”

Cindy Garret said she was searching for moderately priced merchandise for a yet-to-be named women’s sportswear store she is opening in Walnut Creek, Calif., that would “offset the only choice being department stores.” Rosenberg was disheartened by a dearth of newness. “There seems to be a paralysis of creativity,” she said.

Among the trends that emerged at the market, retailers gravitated toward easy-to-throw-on tunics and dresses, handcrafted details such as embroidery and a vibrant orange hue.

Retail prices of easy silk separates and dresses were capped at $238 by 71 Stanton, a new Los Angeles line launching for pre-fall. A silk chiffon halter dresses printed with gold foil dots was a popular style among the 25 pieces featuring mixed media.

Los Angeles’ Ai For Ai attracted buyers with its $270 silk bat-wing blouse trimmed with pleats in the back. Magaschoni interpreted the maxiskirt trend in a $234 version made of lightweight wool printed with abstract graphics in black and cream.

Lucky Brand, based in Vernon, Calif., offered a tan linen tunic with an orange and cream embroidered neck for $99 at retail. KAS New York printed orange feathers on a $118 cotton voile tunic. Los Angeles’ G-One did well with $128 rip-stop shorts in orange. Geren Ford, also based in Los Angeles, epitomized pre-fall whimsy with a $299 pumpkin-colored silk dress adorned with an abstract print on the shoulders.

Letarte by Lisa Cabrinha displayed handmade pieces such as $238 white embroidered eyelet dresses tied at the neck with rawhide leather.

“If they understand it’s handmade, they’ll pay for it,” said Letarte sales representative Darcy Stegner. “It’s like each piece is one of a kind.”