Budgets may have loosened slightly but retailers continue to be cautious with their ready-to-wear and eveningwear dollars. 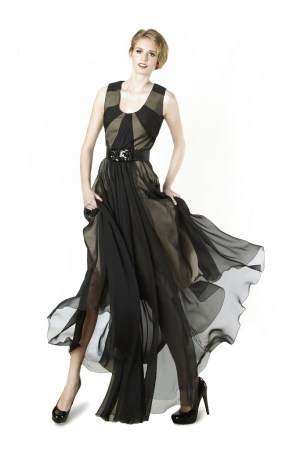 Budgets may have loosened slightly but retailers continue to be cautious with their ready-to-wear and eveningwear dollars.

That was the general consensus of designers at last week’s Designers at the Jumeirah Essex House trade show where more than 18 upscale rtw and eveningwear brands were showcased for fall.

Designers said the show was productive with increased traffic compared with a year ago and several noted they opened new accounts with upscale specialty boutiques. But they agreed that a majority of retailers drew the line at buying evening gowns that would retail for $3,000 or more.

Linda Cunningham, designer of day dresses, evening gowns and cocktail dresses bearing her name, said business was brisk but price continued to be an issue.

“I feel like it’s lightened up a little but I’m still seeing some reluctance….the attitude was ‘I’m not coming here to buy eight gowns but three of your best gowns….’ I don’t think we’re out of the woods yet. There’s some price resistance when a gown goes over $3,000 at retail,” said Cunningham.

Regarding trends, Cunningham said, “Buyers were looking for more tailored and sophisticated looks. It’s interesting about lace because lace is so hot in the market right now. But retailers were coming in and saying ‘I don’t sell lace.’ I don’t know if it’s because lace can look grandmotherly or perhaps it narrows their sale.”

“Buyers at the show were looking for unique looking pieces that made a statement. They wanted flattering silhouettes with bold and strong detailing and interest. However, cost was a concern.…The majority of buyers were willing to spend a few hundred dollars more on something that was a bit more over the top,” said De Paulo.

Lourdes Chavez, whose namesake label is geared to special occasion fare, singled out a big demand for a classic look: the little black dress.

“Everyone was looking for the little black dress and ours was perfect because it wholesales for $700,” said Chavez.

“They are buying black but they still want color.…Open-to-buy budgets have increased by 10 to 20 percent because the client is coming back. But it has to be special looking,” said Moss.

“This is the kind of show you have to market,” said Frank Agostino, designer of day and cocktail dresses and eveningwear by Agostino. “We do an e-mail blast, a preview mailer and a reference to my Web site before the show because this is not a show like the Coterie where hundreds of people pass you by, it’s a destination show at a hotel,” said Agostino.

He added, “If retailers see intrinsic value, they’ll buy it.”