Buyers at the fall-winter boutique trade shows reduced budgets by up to 30 percent. 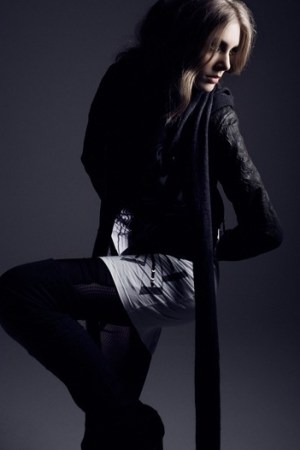 PARIS — Buyers at the fall-winter boutique trade shows reduced budgets by up to 30 percent, obliging them to fine-tune their selections. American buyers were thin on the ground.

“Our budgets are pared down, which is helping us to have a point of view,” said Barbara Atkin, vice president, fashion direction, at Holt Renfrew. “Right now, things have to really jump out at us.”

“The Australian dollar is very weak, which makes it very expensive for us here,” said Malva Bottari, owner of Cyberia, a concept store in Melbourne, Australia, who trimmed her budget 30 percent.

“In this climate, despite looking for something that will jump out at us, we have to ask ourselves, ‘Which one is going to sell?’ and we play it safe and go to black,” she said.

Though citing a budget cut of 30 percent, Wendy Foster, who was looking particularly for hats and accessories for her eponymous four-door fashion and accessories chain in Santa Barbara, Calif., said clothing is selling well and price hasn’t been a problem. “If the item is great, it sells,” she said.

“Everything’s terribly safe, and I don’t think the buyers are looking for safe,” said Karen Radley, a London-based agent who counts Harrods among her clients. She said budgets were down on average 5 percent.

Tranoï’s new location at the Carrousel du Louvre, next door to some of the major runway shows, boosted traffic at the exhibition, which ended here March 9. “A thousand people are just next door for the Marithé + François Girbaud show and will come and see Tranoï afterwards,” said show organizer Michael Hadida. “Yesterday it was the same for Issey Miyake.” This meant the aisles at Tranoï’s Bourse site, however, seemed quieter than usual.

Il by Saori Komatsu’s seamless knitwear collection was also a hit with specialty stores including Spree in Paris and Fiacchini in Forte dei Marmi, Italy. “It’s the most exciting brand at the show,” said Valérie Glarner, a buyer for Parisian boutique Ogo. A wool knit and cotton cardigan with needle patchwork in gray, priced at 336 euros, or $433.10 wholesale, was a bestseller.

Jenny Hjalmarson, a buyer for “bohemian chic” store Lita in Sweden, was looking for new colors, and found them at French brand By Zoé at Paris Sur Mode. “We loved their rusty brown shade, which was a little bit new, and the prices are really good.” By Zoé was offering items including a loose cotton T-shirt in rusty brown at 34 euros, or $43.83, and a white cotton broderie anglaise shift dress at 67 euros, or $86.36.

Rendez-Vous co-organizer Vidya Narine said there were fewer American and Japanese buyers than previously, adding retailers were not spending as much time at the show. More buyers were placing orders later, she said, a trend that was mirrored at the other events. “Business is continuing, but buyers are more prudent,” she said.

Accessories again occupied a large part of exhibition space at Tranoï, with Lebanese jewelry designer Rosa Maria getting attention for her gold and silver collection inspired by natural textures. Manager Monique Haddad said rings with mushroom decoration were a hit.