Strong on creative, masculine and luxurious designs, the French capital is starting to give other men’s wear capitals stiff competition. 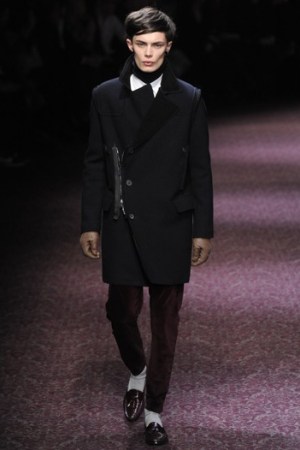 PARIS — Strong on creative, masculine and luxurious designs, the French capital is starting to give other men’s wear capitals stiff competition.

“Paris, for us, was as exciting as the city itself. We arrived in anticipation of great opulence and unbridled creativity, and we were very pleased,” Nickelson Wooster, men’s fashion director for Neiman Marcus and Bergdorf Goodman, said of men’s fashion week, which wound up here Sunday.

“Paris has proved to be prolific, as we’ve picked up new brands to add to our portfolio,” said George Yang, general merchandise manager, men’s wear, at Lane Crawford in Hong Kong, listing Ann Demeulemeester and Dover Street Market among them. “We’ve experienced some of our best sell-through results recently and have increased our purchases to be in line with our positive performance. Paris has always provided the compelling, directional and the dramatic.”

Buyers were in an upbeat mood, with budgets to match.

“The men’s business is growing,” agreed Claudio Antonioli, owner of Antonioli in Milan, citing gains in online sales to international clients. “Budgets are up 35 percent on the year-ago period.”

“I thought the collections were strong, with a real focus on quality and detailing. It felt like a very masculine season,” said Stephen Ayres, buying manager for men’s wear at Liberty in London. “We saw a lot of outerwear, and chunky knits that were very masculine. People were trimming outerwear with lots of fur, which gave a real feeling of luxury.”

Here’s what buyers had to say:

Jason Broderick, general merchandise manager for men’s wear, Harrods:
TRENDSPOTTING: “There’s a new sense of luxury coming to France. It’s luxury dressing that’s wearable.”
SOUND-OFF: “Paris obviously is not as big a business as in Milan in terms of power brands, but for men’s wear there’s the creativity side of it.”

Eric Jennings, vice president and fashion director for men’s wear, home, gifts, food at Saks Fifth Avenue:
TRENDSPOTTING: “The most saleable trends were the tailored jackets. It was great to see sharp, tailored shoulders. Also, the sweater-jacket hybrid continues. In terms of color, brown is the new black and camel is the new gray.”

Richard Johnson, men’s wear buying manager, Harvey Nichols:
TRENDSPOTTING: “Coats, especially in shearling and leather, and heavy knitwear which can be worn as outerwear will be the key investment pieces for fall 2011.”
SOUND-OFF: “We have seen a much clearer, distinctive direction from the Paris designers, which has centered around sophisticated elegance and simplicity.”

Nickelson Wooster, men’s fashion director for Neiman Marcus and Bergdorf Goodman:
TRENDSPOTTING: “Twisted classics, warm color, fur and hats.”
SOUND-OFF: “The timing of everything. Between the New York and Pitti Uomo trade shows and the one-day break between the Milan and Paris runways, it is impossible for one person to cover it all.”

David Walker-Smith, buying and merchandising director for men’s wear, beauty, fragrance, home and leisure, Selfridges:
TRENDSPOTTING: “I think the superwide pant that Raf Simons introduced for spring-summer was picked up all over Paris, and I think it’s an absolute key shape for [fall] 2011. [Also] color is very important.”
SOUND-OFF: “We didn’t have any problems — apart from Givenchy when all the lights went out and we had to sit there for an hour and a half.”

Stephen Ayres, buying manager for men’s wear, Liberty:
TRENDSPOTTING: “For us, the biggest trend this season is a real focus on outerwear, with the silhouette a bit longer.”
SOUND-OFF: “It was nice seeing a lot of collections grow up a bit and become more serious this season. And the use of color. It will look really exciting on the shop floor.”

Claudio Antonioli, owner, Antonioli, Milan:
TRENDSPOTTING: “Oversize was the main theme in many collections — easy, comfortable shapes and big volumes. For example, Givenchy sells T-shirts both in regular and oversize fits.”
SOUND-OFF: “I buy almost everything in Paris. As an Italian with a store in Milan, I would really like to buy in my country, but the gap between the two cities is too big. Someone like me — who wants to buy niche, innovative brands — definitely has to come to Paris….I really hope that Milan Fashion Week becomes more international and interesting.”

Tancrède de Lalun, merchandise manager for men’s and women’s wear at Printemps:
TRENDSPOTTING: “A more supple silhouette, with a new trouser shape and a wider jacket; city versions of work shoes; coats and outerwear in ample shapes and longer lengths.”
SOUNDOFF: “I liked this season, both in terms of the catwalk shows we saw and the brands that were showing at trade fairs. These new brands are more accessible but they have a strong fashion message.”

Sarah Lerfel, buyer at Colette:
TRENDSPOTTING: “Those wide trousers we saw are not an easy sell. They don’t suit everybody, so we will feature just a sprinkling.”
SOUNDOFF: “Givenchy had all these problems with their show, but I thought it was worth the wait. I was wondering how long people would stay. Everybody wanted to see the show. That is always quite spectacular. I found it really fascinating.”