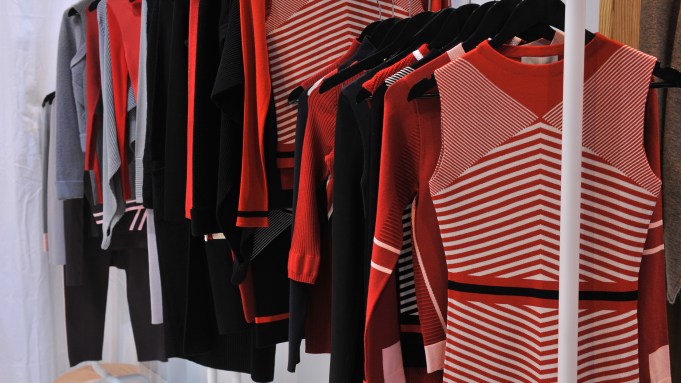 PARIS – Women’s ready-to-wear retailers were playing it safe as they took their first look at fall during the Who’s Next trade show, which ran here from Jan. 22 through Jan. 25.

With 48,684 visitors to Who’s Next and its sister accessories trade show Première Classe — down 4 percent versus the January 2015 edition — hotels normally full around the show’s Porte de Versailles exhibition halls had slashed rates. Visitors used to lining up at the entrance were surprised to walk right in, while others had heard all manner of rumors about what to expect in Paris, including armed guards.

“I made this trip despite the events because I did not want fear to interrupt my business of 30 years in Paris,” said Aram Itani, owner of Aram Boutique, in Washington D.C. “Many designers and a number of buyers did not attend because of safety worries. My overall impression was that it looked like a smaller event with fewer options.”

With uncertainty the key word for the economy, Itani said his big concern going into fall is finding fashion and quality at affordable price points.

“Customers are very concerned about price,” he explained.

Itani praised a “colorful and happy fall. There are a lot of ethnic influences — knitwear in looser fits and decorated with colorful embroidered trims,” he said, naming Alessandra C’s knitwear and evening collections from Romanian designer Cristina Savulescu as his standouts.

Price points were a key issue on many buyers’ agendas, with budgets largely flat and ambitions measured.

“It’s hard to be buying winter again when we have a lot of winter stuff left,” said Louise Fitton, founder of London-based e-shop Laurie & Jules.

“Our biggest concern is jackets,” agreed Jan Hansson, chief executive officer of Eriks men’s and women’s wear store in Malmö, Sweden. “In Sweden now we don’t have the kind of winter we used to. You never know how many coats you’re going to sell.”

“The sales used to start on Feb. 2, and today most of the High Street was on sale the second Saturday before Christmas,” she said. “We’ve tipped the seasons around. Technically spring starts when leaves appear on trees. We should be following the trees, please.”

Hoping to gain instead in occasionwear, independent retailers, notably from Ireland, where occasionwear is a particularly strong category, were challenged to find new brands.

“While there are fantastic casual brands here, we’re not finding what our customer needs in occasionwear,” said Bronagh O’Sullivan, owner of Dublin boutique Bow & Pearl.

Trends cited by retailers included bottle and khaki greens, sportswear influences in knitwear, and parkas and shearling dominating in outerwear.

The fair saw strong demand for midmarket brands La Fée Maraboutée and Des Petits Hauts, where a pink fake fur coat, quilted gold-printed jacket and shimmer-coated top were standout pieces. First-timer Knitss won accounts from France and the Middle East for its knitwear on a retro-sport journey. Princess Goes Hollywood, where classic cashmere got a twist with Snoopy designs, was another collection praised by retailers.

In what looks to be a challenging fall, independent retailers called for concepts as well as collections.

“Everyone has 50 pairs of trousers, umpteen coats. You need something more,” said Muriel Revol, a retail consultant planning to open a multibrand Paris store this year. “It’s a big selling point, if the concept is unique and gives us a story.”

Revol named Chacok; Ana Sousa, where a coat unzipped to morph into a jacket and skirt, and young designers Maille de Léa and Pauline B. among standouts.

Presenting its first winter collection since its comeback, the 45-year-old French label Chacok, known for its prints, will roll out a new boutique concept this year, starting with a flagship opposite Chanel on Rue Cambon. The new-look boutique is stewarded by the brand’s graphic art-trained designer Florence Bamberger, who is fronting her own Chacok blog, part of the brand’s push to direct-to-consumer experience.

Among those making fashion entertaining, Who’s Next first-timer Belgian label Lucy Has a Secret! hands out secret gifts each season, while visitors to Parisian label Bleu Tango could leave the trade show with a watercolor portrait of them wearing one of the nascent brand’s printed shirts or jackets, painted by designer Lou Ripoll.

“We’re communicating our artisanal side. We’re not commercial,” Ripoll said. The two-year-old brand counts Julie Gayet as a fan.

Meanwhile, Who’s Next organizers reported a record turnout at its Retail Expert Club, particularly among French retailers, who represented 70 percent of attendees at talks on everything from how to improve an online following and sales through storytelling to the futuristic topics, like the role of artificial intelligence and neuromarketing in retail.