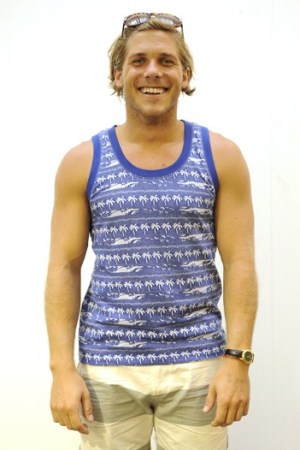 The ambience at all three shows was upbeat, with strong traffic across the board, even from Japan. “It has been very dynamic,” Tranoï organizer Michael Hadida said.

Richard Johnson, men’s wear buying manager for Harvey Nichols, said: “We’re increasing our budget for the International Designers and Accessories by strong double digits as customers continue to react really positively to designers who deliver quality craftsmanship in their product and a very distinct and identifiable point of view. Trendwise, we’re looking for innovative use of color and print to create an upbeat mood and to keep the shop floor looking really vibrant.”

“Since Bloomingdale’s has a strong California presence it was great seeing collections like Warriors of Radness and Lighting Bolt offer great surf-inspired collections and plenty of new items to invest in,” Harter said. “We are coming off a strong spring season, so we are capitalizing more on trends we want to get behind from our existing matrix. I really felt there was a lot of excitement with color and new items from Norse Projects, Burkman Bros., Riviera Club and YMC, who all showed at Capsule.”

Indeed, new, vibrant shades of blue were visible across the shows. “There is this shade of blue, between French and royal, that is gorgeous,” Saks Fifth Avenue vice president and men’s fashion director Eric Jennings said. “It was everywhere on the runways, and it really jumps out at you.” He said unusual shades of blue also attracted him at the trade shows. Other key themes he spotted were ethnic and tropical prints and straw hats.

Also at Rendez-Vous, tailored shirts with pattern details from British brand Empire’s Union attracted buyers. The brand is distributed primarily in Japan, as well as at H. Lorenzo in Los Angeles, and is in discussions with Flannels in the U.K., designer Pete Macdonald said.

The offer at Tranoï, meanwhile, was less casual than at the other shows. “I like Tranoï because it is more directional,” Saks’ Jennings said.

Buyers also liked knitwear from South Korea’s General Idea and Japan’s Side Slope, as well as hats from Japan’s CA4LA.