Retailers shopping Moda Manhattan were still determining how much lower their fall open-to-buys will be. 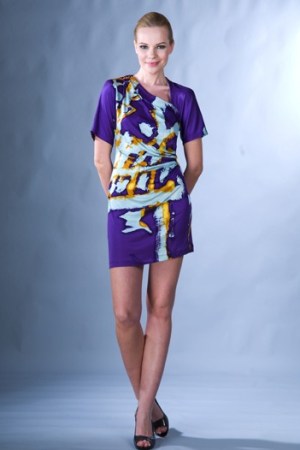 NEW YORK — Retailers shopping Moda Manhattan were still determining how much lower their fall open-to-buys will be, and a lot of the decision was based on whether they were able to find the special, colorful pieces they were looking for — plus flexibility from designers.

Special was the buzzword at Moda Manhattan, which took place from Feb. 22 to 24 at the Jacob K. Javits Center here, as buyers finally began dabbling in fall orders, albeit somewhat timidly. But instead of leaving paper, retailers took their detailed notes home, carefully reviewing each item to make sure it will sell.

Buyers said they were looking for dresses, jackets and outerwear, all in bright colors and new shapes that their customer doesn’t already own. Vendors reported their best-selling items included print dresses, black-and-white color schemes, plaids and novelty outerwear.

David A. Schwartz, vice president of women’s boutique Sophy Curson, said his Philadelphia store is still determining its open-to-buy — largely based on if the product at the European trade shows stands out — but regardless will cut back at least 25 percent.

“It’s going to be another rough year, and the only way we can get through this is by not overbuying,” said Schwartz. “Our strategy is get in and get out — buy one and reorder. But there’s no formula. We didn’t leave many orders — we took our detailed notes, pictures and swatches, so we can move our budget around based on what we find.”

Looking primarily for immediates, Schwartz said he was attracted to special cocktail dresses and coats in bright colors or with a “little bit of sparkle” in two prices ranges: very expensive (dresses for $2,500 at retail) and less expensive (cotton coats for $300 at retail). Ethnic prints and Eighties-inspired looks appealed to the stores’ buyers.

There was another important qualification for items: “I wanted nothing that could be in the majors or on sale too soon, so I was concentrating on little lines that cater to boutiques,” Schwartz said. “Buyers all around are saying, ‘Are you selling this to Saks? Because if you are, I’m not interested.’”

Buyers reported that vendors were more flexible than ever. For example, Dora Landa, a Shanghai-based contemporary line wholesaling for $49 to $115 that launched for fall, offered vendors 15 percent off orders made while at the show — not after — “for stores to cover losses in the current financial crisis,” according to a card it handed out.

“Vendors are looking to help with special ordering,” McKenzie said. “They are allowing you to cherry-pick some things, ordering just ones or twos.”

McKenzie found three new lines, including two at a higher price point than the store usually stocks. “We’re near a really high-end shop, and we hope we will get run off when their customers look for less expensive lines,” she said.

After shrinking its open-to-buy significantly for spring, McKenzie said the store was still finalizing its fall budget, but she predicted it would be down only by a single-digit percentage. She looked for “really special and different” dresses for fall and “pops of color.” But she said she was writing smaller orders and waiting longer to write, welcoming input from Coco’s sales staff more than ever.

Exhibitor attendance was down more than 12 percent to just over 300 exhibitors this Moda, but buyer attendance was up, according to Britton Jones, ceo of Business Journals Inc., which owns Moda.

Democracy, a better-priced dress line in Kellwood Co.’s portfolio that wholesales from $50 to $70, showed at Moda for the first time. “We wanted to reach out to more specialty stores, and this show attracts a lot of specialty stores,” said Denise Miller, president of better dresses at Kellwood.

“Buyers aren’t really writing, but they are taking very serious notes,” said Harald Jonassen, president and co-owner of Jane Wang, a silk jersey-dress line that launched for spring and wholesales from $98 to $128. “It’s been a tough economy, but now buyers seem to have a plan. Last time they just wanted cheap, but this time there’s a group that wants value.”