Buyers and exhibitors were mostly pleased with Capsule and Axis, which have both grown significantly since last season. Denim, ath-leisure and elevated basics were key trends. 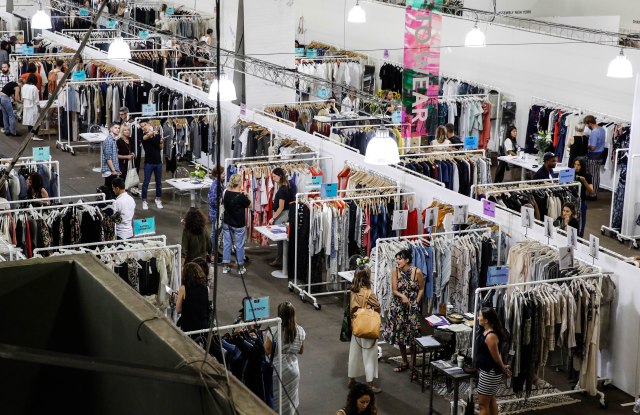 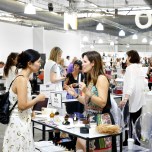 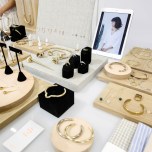 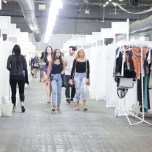 NEW YORK — Buyers praised a bigger Capsule, which has grown to encompass not only the women’s contemporary market but also beauty and fragrance.

The show, which took place at Pier 94 in New York City last Thursday through Saturday, had almost 700 exhibitors, up from 450 last season. For the second time the show was also presented alongside Axis, a two-season-old trade show that targets the Millennial market. For the first time Capsule, which was purchased by Reed Exhibitions in January 2014, segmented out the swim, active, footwear and accessory categories and collaborated with Elements, a beauty show, on a dedicated space for fragrance, skin care and makeup.

“It has grown significantly and that’s great,” said Lauri Carleton, owner of Magpi, a women’s contemporary boutique located in Los Angeles. “I like that it’s divided by category and it’s easy to shop.” Carleton noticed more color and was looking for unique items in addition to resort pieces that work for the California climate. Carleton liked the brands Emerson Fry and Objects Without Meaning.

Zai Rajkotwala, owner of lifestyle concept store Easy Tiger Goods in Toronto, also welcomed the bigger show. “You get to see more and discover more brands,” said Rajkotwala, who was looking for gifting items, sunglasses and watches. “I just wish there was more of a men’s presence.” She was impressed by Wal & Pai footwear.

Despite its growth, Andi Bakos, owner of West End Select shop in Portland, Ore., said the show still offers a nice selection of new designers and innovative pieces. “In Portland, everyone is a maker. You have to find stuff that’s more sophisticated that they can’t make themselves and Capsule provides that.”

Alexa Stark, a designer who’s also based in Portland, showed at Capsule for the first time. Her collection, which is sold at LN-CC in London and Clementine in Boston, works with sustainable materials and retails from $200 to $400. Stark said traffic was consistent and buyers were interested in her denim shag pieces and white denim dress shirt with raw edges.

Denim was also popular for Wood Wood, a Copenhagen-based men’s and women’s contemporary brand. Lilo Klinkenberg, a Wood Wood sales assistant, said the brand hasn’t produced denim for some time but is launching a special denim collection in November that includes a mid-rise relaxed and a slim fit along with a culotte silhouette. The line retails from $150 to $190. Other key items in the collection included pajama-inspired sets. Klinkenberg said traffic was steady at the show.

Hillary Taymour, designer of women’s contemporary brand Collina Strada, said she was initially nervous that her brand would get lost at the large show, but was pleased with attendance and wrote orders. Taymour has readjusted her New York City-based brand to focus on basics made from elevated fabrics and has lowered her price points. “The retailer wants to be able to merchandise my items multiple ways,” said Taymour, whose collection retails from $225 to $700. According to Taymour, retailers liked her new line of slipdresses and the structured denim jumpsuits.

Kay Wang, designer and owner of The Things We Keep, a New York-based jewelry line, wasn’t pleased with the show’s expansion or her smaller booth space. “Capsule is growing and evolving and I think their interests might be different from ours,” Wang said. She’s considering showing at the Woman show next season.

Jana Flumiani, director of sales and merchandising at Artisan de Luxe, said traffic was strong. “I was impressed by the quality of stores that stopped by,” she said. The two-year-old brand, which is carried at Ron Herman and Anthropologie, is known for modeling its designs after romantic vintage pieces. Flumiani said buyers liked the hand-embroidered army jackets, sweatshirts and denim shirts. The collection retails from $75 to $340.

“The Capsule show has been able to grow dramatically since we moved to Pier 94 last season, but growth is not the key objective,” said Deirdre Maloney, Capsule’s cofounder. “We’re still as committed as ever to offering a sharply curated presentation of the world’s best independent designers, and strive to maintain a sense of intimacy with several show-within-shows and guest-curated sections.”

Axis, which is also owned by Reed Exhibitions, has grown, too. Vanessa Chiu, the Axis show director, said 200 brands, including bigger names such as Reebok and Herschel, had spaces at the show, which is up from 125 last season. There were more intimates brands along with a bigger section for apothecary, beauty and home, which Chiu said was a request from retailers and buyers who attended the first show. According to Chiu, because of the success of the show, it will have its own venue separate from Capsule next season and move next door to Pier 92.

Erin Chiamulon, owner of the Los Angeles-based ath-leisure brand Electric & Rose Clothing, came back to Axis after showing last season. Chiamulon said there were more visits from new accounts this time around. The line, which retails from $65 to $125, is inspired by Venice Beach and is known for its custom prints. Chiamulon works with performance materials and cotton in order for the collection to sit across multiple categories. “We want it to be more of a lifestyle brand than an active one,” she said.

Liza Lopez, sales representative at contemporary women’s line BLQ BASIQ, was showing at Axis for the first time and felt traffic was slow. She noted that although buyers are less interested in immediates, they are more cautious and price conscious. The BLQ BASIQ line retails from $40 to $120 and is currently sold on e-commerce site Revolve. Lopez said popular items included the double-lined trapeze dresses, tank dresses and cropped tops with matching skirts.

Sue Martin, who owns young contemporary boutique Ruby Sue in Katonah, N.Y., attended Axis for the first time and thought it was strong. “I like it. It’s definitely what you see the girls wearing on Instagram,” Martin said. She placed orders at both Capsule and Axis. She said her customer is looking for different things that set them apart and she recently started carrying a small collection of active and yoga clothes.