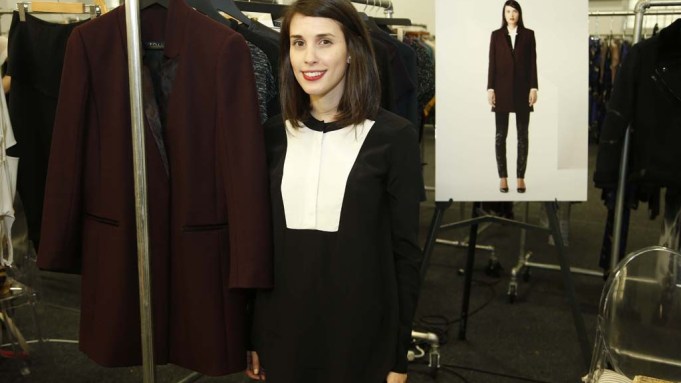 Brand recognition was the main goal for up-and-coming designers at this week’s Capsule trade fair.

The three-day show, which closed Monday at Basketball City in Manhattan, featured 250 designer collections of ready-to-wear, sportswear and accessories aimed at fashion-forward retailers and consumers.

“It seems like the New York shows were plagued, especially New York Fashion Week, but having beautiful weather over the weekend certainly helped,” said Corrado.

Retail registration was not available, but Corrado said attendance increased “10 percent over a year ago.”

“We have a core audience that really loves Capsule and continues to support the show. Capsule has become a destination to find new, young talent, and young designers are discovering that Capsule is a good place to launch their lines,” said Corrado.

A number of new designer brands as well as established fashion labels looking to expand distribution in North America and the global market was a priority at this year’s fall show. While designers acknowledged that few orders were left at the show, they were quick to point out that exposure to retailers looking for newness and innovation was a deal-closer in choosing the Capsule venue.

Among the first-time exhibitors was Franziska Fox, a rtw and knit specialist that also uses fur in a whimsical way.

Designer Julia Fox said retailers had a positive reaction to the brand, which was described as “forward” looking.

“A lot of retailers said the collection looked new and exciting,” said Fox.

Briana Andalore, creative director, observed buyers “still want to play it safe, but they were open to suggestions for different colors.” Executives from the Neiman Marcus and Nordstrom buying offices reviewed the line, she said.

Suggested retail for key items at Franziska Fox include a white knitted rabbit fur hoodie at $995, and a rabbit fur snood in white, black, cobalt, and bright yellow and red, at $345, said Faisal Hassan, marketing director.

Shantall Lacayo, a rtw and eveningwear designer from Nicaragua, said she was “very pleased” with her trade fair debut.

“At the beginning I was not sure what to expect because I needed to find sponsors, but many retailers have come to us and picked up line sheets. My goal was to make contact in the U.S. market. I think we have to keep in touch with New York,” said Lacayo, who was a second finalist in “Project Runway Latin America” in 2010.

A dark green evening jumpsuit of stretch tulle accented with beaded embroidery was a top item. It retails for $1,400.

Another first-timer at Capsule was designer Felicia Burke of Toronto and her Bazzul label of minimalistic evening gowns.

“The show has been really great for me.…It was quiet but I almost feel like it was quality versus quantity,” said Burke. “I would definitely want to do this show again and would also love to do Capsule in Paris, because the show takes place during Paris Fashion Week and that means all the buyers are in Paris.”

Top items by Bazzul include a reversible long jersey gown with a scoop-back treatment wholesaling for $105.

“I feel people who come here are looking for something different. The stores are edgier and as far as the vibe and fellow designers, I feel we’re all on the same page,” commented Brooke Atwood, a Savannah, Ga.-based designer of contemporary rtw. “People didn’t leave orders, but you follow up with an e-mail. The key is to get a card from everyone.”

Atwood singled out two leather T-shirts for generating the greatest interest: a perforated style in black or white, retailing for $350, and a black lambskin leather and velvet look for $310.

Sara Hankin, designer of Tosia rtw, said she enjoyed sharing her first experience at Capsule with the trade and retailers.

“It’s been really interesting because I’ve received a lot of attention from buyers as well as editors and other designers, and there’s been a lot of positive reaction,” said Hankin.

Top ideas at Tosia include a black Neoprene dress retailing for $495, a black zip-back leather top for $695, and a wool and leather motorcycle jacket in midnight navy with dyed shearling collar for $995.

“Anthropologie was here and they really like my enchanted forest print with mini mushrooms, owls and bears,” said Desjardins, as she showed a cotton-blend printed top and skirt, priced $58 and $78, respectively.

A Sherwood red plaid dress of polyester rayon and spandex, wholesaling for $87, and a short cape, for $82, also were top items, said Desjardins.

Meanwhile, Joshua Hupper, founder and designer of Ghost Baby, a trendy rtw brand with offices in China and New York, said he was pleased with retailer turnout.

“We’ve seen more traffic the first and last day of the show than we did at last September’s edition,” said Hupper.

Key items include a black and white tweed knit miniskirt wholesaling for $50, and a black basketball netting-inspired long dress for $90.