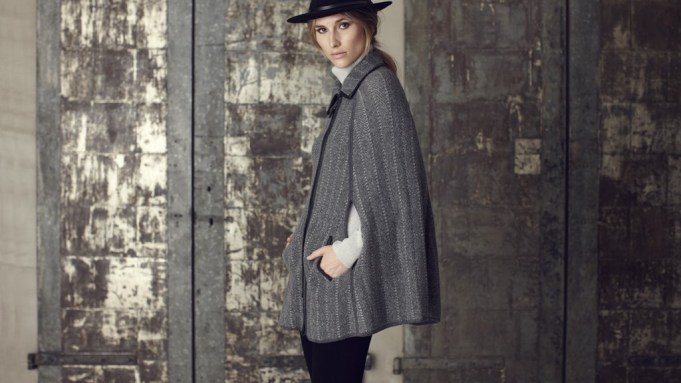 Scottish cashmere mill Todd & Duncan, which supplies yarns to some of the world’s best-known luxury brands, is aiming to leverage its renown in fibers to become a branded ready-to-wear maker.

The company will open its first retail store at 54 Greene Street in New York at the end of this month, showcasing the new collection of Todd & Duncan cashmere sweaters, jackets, skirts, dresses, outerwear and accessories.

“Todd & Duncan has built up all this cachet as a cashmere yarn brand and we want to take it to the next level,” said Lisa D’Esposito, the company’s vice president of sales and marketing. She called the collection “classic contemporary,” with a color palette of neutrals and bright colors. It has a clean, modern aesthetic that would give it adjacencies to brands like Ports 1961 and Burberry Brit.

The 2,000-square-foot store in SoHo will be followed by an e-commerce launch at todd-duncan.com in September. A wholesale effort to other retailers will begin in February for the fall 2014 season.

Designed by Joni Knight, vice president of design and merchandising, the collection retails for between $295 for a classic jersey cashmere sweater up to $1,095 for a cable cashmere coat with leather trim. “We didn’t want to make the price points or the garments too precious,” said D’Esposito.

With a history dating back to 1867, Todd & Duncan was acquired by Ningxia Zhongyin Cashmere Co. Ltd. in September 2009. Based in Ningxia, China, the publicly traded vertical manufacturer is a leading supplier of raw cashmere fibers as well as finished goods. It had a long business relationship selling raw materials to Todd & Duncan prior to the acquisition.

Todd & Duncan opened a New York office and hired about 15 employees to oversee the branded collection launch, with a focus initially on the U.S. market. An expansion into Asia and Europe will occur down the road, said D’Esposito.