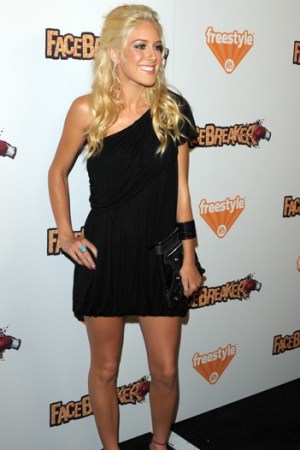 This story first appeared in the July 9, 2009 issue of WWD. Subscribe Today.

From Jennifer Lopez to Mandy Moore and Paris Hilton, the glow has worn off for some celebrity contemporary clothing lines because of oversaturation, competition and the overall pullback by recession-battered consumers.

Marketing in the future might revert to more low-key endorsement deals or mimic the successful strategies of entertainers who don’t put their names on the merchandise, such as Gwen Stefani, with her L.A.M.B. brand; Jay-Z’s Rocawear, and Justin Timberlake’s William Rast collection.

Others in that category include Mary-Kate and Ashley Olsen’s The Row and Elizabeth and James brands, Nelly’s Apple Bottoms and Beyoncé Knowles’ Deréon label.

But the sector is being challenged. Moore closed her Mblem contemporary T-shirt line, Hilton is seeking a new apparel licensee after an unsuccessful run with Dollhouse in the U.S., Anchor Blue shut down “The Hills” star Heidi Montag’s Heidiwood line after just a year and Lauren Conrad closed her contemporary sportswear line in favor of developing a less expensive brand for Kohl’s. Most recently, Lopez closed Sweetface along with all of her JLO by Jennifer Lopez apparel business in the U.S.

Celebrity apparel lines hit a peak a few years ago, and now that there are so many on the market, consumers are tired, said Jane Buckingham, who founded the research firm Youth Intelligence and left to start the Trendera consultancy.

“They were feeling saturated with everyone having a line,” she said. “It became not special anymore.”

Although the public’s interest in the famous remains, people “want to read about them and listen to their music. It’s just that it’s not about just one big celebrity anymore — it’s all about a mix,” Buckingham said.

She said she sees more celebrities taking a backseat with their brands. “This is a generation of young people that has a little bit of humility, and they really don’t like when people are self-obsessed,” she said. “They like that Gwen’s line is not all about Gwen.”

Michael Stone, co-founder, president and chief executive officer of The Beanstalk Group, a brand licensing agency and consultancy with clients who include the Olsens and Hilton, said fallout from the recession makes it tougher to succeed. The higher bar hasn’t deterred Miley Cyrus, who plans a line with Wal-Mart, and Knowles is launching the new Sasha Fierce brand.

Stone said executives are considering removing Hilton’s name from her label, which he said does well in Europe with footwear, apparel, bedding and lingerie. Hilton’s apparel has had difficulties in the U.S. and is no longer being produced in the country, although the fragrance and footwear continue to sell well in the U.S.

“We haven’t been very happy with our licensee, so we are looking for a new one for the apparel,” Stone said.

Marshal Cohen, chief industry analyst at market research firm The NPD Group, said the novelty of the celebrity as designer has worn off.

“Everybody and their mom was getting into the business, and we now have this sea of endless supply from these celebrities,” Cohen said. “It’s finally to the point where retailers are looking to trim, and with that sea of competition, celebrity or not, they have to earn their stripes in order to survive.”

Cohen said he believes celebrities will keep trying to enter the fashion business, but not in the same way.

“It’s not going to be where we were two years ago, with a flood of names on apparel,” he said. “We are going back about 10 years, where people who are deserving and creative will come in. The customer is going back in time, they want reliable brands, and if they want a dose of a celebrity, they will go to a concert or to a movie. It’s all about getting real again.”

The economy has been a key factor in the shakeout of celebrity lines, said Gerry Philpott, president and ceo at market research firm ePoll.

“If a celebrity wants to be in fashion, they will start attaching themselves to a particular designer, the way it used to be,” he said. Citing the recession, he added: “The apparel business not being something simple to enter into — there are too many things working against these brands. If I were giving advice to a certain celebrity, I would probably point them into something more lucrative than a clothing line.”