Chaiken and Capone Makes a Comeback

The line built a following in the Nineties for great-fitting pants. It will be reintroduced at retailers this spring. 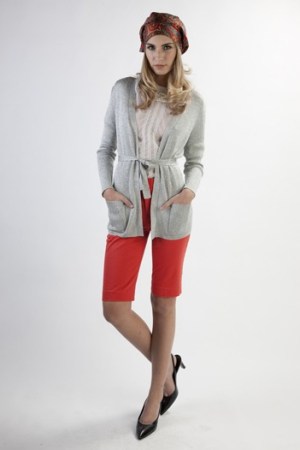 Chaiken and Capone, which built a following in the Nineties for great-fitting pants, will be reintroduced at retail this spring.

Julie Chaiken, the San Francisco-based designer, will relaunch Chaiken and Capone at stores such as Barneys Co-op on Madison Avenue in Manhattan and Cusp by Neiman Marcus, beginning next month.

Founded by Chaiken and Pamela Capone in 1994, Chaiken and Capone was the “go-to” resource for urban women seeking pants with flattering cuts. Capone left the business in 1998, and Chaiken bought out her share. She continued to run the business, renaming it Chaiken, and in 1998 hired as creative director Jeff Mahshie, who stayed 10 years. While the pants remained the brand’s signature, the label expanded into a full collection of sportswear, outerwear, swimwear, maternity and eveningwear. Chaiken, which was shown on the New York runway, was sold in about 400 stores globally, including Saks Fifth Avenue, Macy’s West, Bloomingdale’s and Nordstrom. In July 2008, Chaiken closed her New York showroom at 580 Broadway and moved all her operations to San Francisco, where the firm and her family were based. The Chaiken business never officially closed, but in recent years focused only on special projects.

Reached in San Francisco, Chaiken told WWD that she became more active in the business in the early part of last year. She felt it was the right time to reintroduce the Chaiken and Capone label, which she owns. She showed the line, which she and her team designed, to several stores in September, which picked it up for spring. “We did a soft launch for spring and got the stores we wanted,” said Chaiken, declining to give first-year projections.

Chaiken said the spring grouping is more casual. For fall, she intends to add chunky knits, leathers and some “go-to-work” looks. She has no plans to have runway shows for the collection, which will be manufactured in South America and Asia. It will be repped in New England, Atlanta, Chicago and Dallas.

Chaiken and Capone will be less expensive than the Chaiken line was. “It has a little lower price point. Chaiken started to creep up toward designer. This has a more contemporary price point,” said Chaiken. For spring, wholesale prices range from $60 to $64 for pima cotton tops; $82 to $90 for pants; $73 to $76 for Bermuda shorts and skirts; $150 for blazers, and $112 for dresses. The line is comprised of cottons, twills and Modals, in vivid colors as well as neutrals. Tops have feminine cuts such as cowl necks, one shoulders, off the shoulders and draping. Pant styles include the Rocker skinny pant, the Maggie boot cut and the 2001 Classic pant, in addition to new cuts. Rounding out the collection are day-to-night dresses, tanks, Bermuda shorts and pencil skirts.

“It’s very classic and clean, while being fashion forward. That’s what people have always come to me for,” said Chaiken. The key demographic is the woman between 25 and 45, she said. “It’s the woman who understands that you can wear clean lines while still being a little bit sexy.”