Chief executive officer maps out the development of the brand under the creative direction of Jeremy Scott. 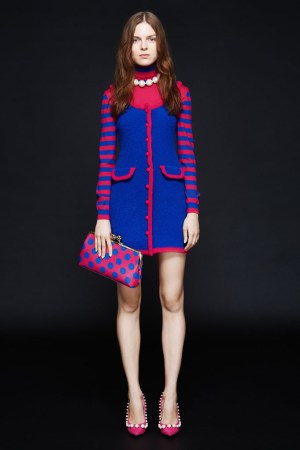 The rejuvenation of the Moschino brand is trickling down to the former Cheap & Chic label, which has been renamed Boutique Moschino.

To present a consistent message, Boutique Moschino is also being evolved. “This is a radical moment of change for Moschino,” Alessandro Varisco, chief executive officer of the brand, told WWD. “Franco Moschino was a communicator and Jeremy Scott recovered this attribute with the tools of the 2000s, which are viral, very strong and have great impact.” Varisco noted how Scott has improved the brand perception and targeted a younger consumer, “looking to the future.” Cheap & Chic, he said, had the staple Moschino ironic twist, “but had become dated.”

The change of the name telegraphs but is not limited to a customer that is younger, but also leads a busy working and personal life. “She is not as fashion addicted and irony remains key to Boutique Moschino, as well,” Varisco said. “This is an aspirational line but still reflects Franco’s mantra and his customer’s motto: I am what I am.”

Boutique Moschino is priced 30 to 40 percent below the signature line. Varisco said the company is dropping the men’s category of the brand and focusing on women’s.

The executive touted the brand’s “good capillary distribution. We are communicating with our sales channels and let the product stand out.” While Cheap & Chic was shown on the catwalk for years, Varisco said a runway presentation is not in the cards at the moment. “It’s premature,” he noted.

There are plans for shops-in-shop rather than freestanding stores, explained Varisco.

Boutique Moschino is produced by parent company Aeffe. The younger Love Moschino brand continues to exist and its apparel is produced by Sinv, which also has a stake in Moschino, while its accessories are produced by Aeffe’s Pollini firm.