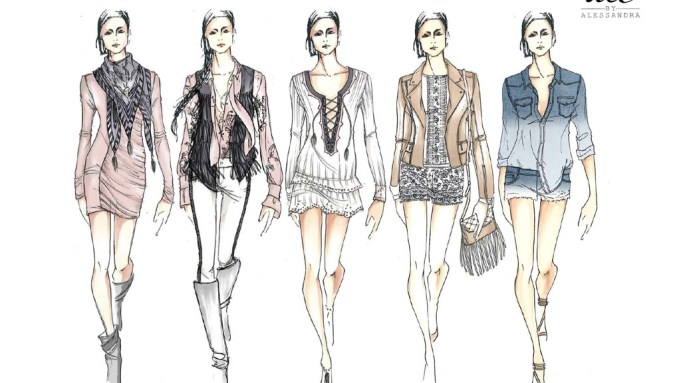 Sherman Oaks, Calif. — Cherokee is linking with Victoria’s Secret Angel Alessandra Ambrosio to bring to market a midrange lifestyle brand, Alé by Alessandra, set to make its debut in spring 2014.

Starting with apparel pieces ranging from casual to day-into-evening, Alé is aimed at the 18- to 35-year-old looking for clothes that emulate Ambrosio’s Brazil-meets-Malibu-by-way-of-Europe style.

For the $924 million brand marketing company based here, a pioneer of the direct-to-retail licensing model, Alé, created by Ambrosio’s company Silver Sunrise, represents new territory in that it is not owned by Cherokee and was created from the outset as a global-personality-driven brand that will roll out first in Latin America.

In addition to its namesake brand, Cherokee owns Sideout, Carole Little, Liz Lange and Completely Me, the last two of which were acquired from Bluestar Alliance last September. Its retail network extends to 45 countries, and while none of its current retail partners will be carrying Alé, the company has plans to partner with well-known department stores and specialty chains worldwide.

“It’s not typical for Cherokee to get involved in representation; we usually market our owned brands, but we felt the work [Silver Sunrise] had done was very compelling, extremely well thought out and not designed as a short-term concept. Based on what they presented to us we really believed in it,” said Henry Stupp, the firm’s chief executive officer, of his first meeting with Ambrosio four months ago.

For her part, Ambrosio said, “This is not a hobby for me. I’ve been a fashion model for 15 years and designing is just an extension of my career. I still plan on modeling lingerie, but at the same time this is a business transition that I plan to have around for a long time.”

The model and mother of two was recently named number six on Forbes’ list of top model earners from May 2011 to May 2012 with an income of $6.6 million.

Taking cues from Cindy Crawford and Kathy Ireland, she plans to use her modeling fan base and earnings as the foundation for a lifestyle empire. “I know what I like and what I want to see. I want to be satisfied just as much as the customer. I’m creating a brand that’s everything that I am passionate about and have experience in, from growing up in Brazil, traveling around the world and moving here five years ago,” said Ambrosio.

She named Domenico Dolce, Stefano Gabbana and John Galliano as designers she has learned from while modeling. The Alé sketches reflect her love of boho chic, body-conscious and colorful clothes with a beachy vibe. From tunic, mini and maxidresses to shorts, stretchy slim pants and cropped jackets, the pieces are similar to styles she is often spotted in on red carpets and off-duty at the Malibu Country Mart.

“It’s about having a well-designed product with unique DNA that speaks of who Alessandra is. We are very fortunate she has an opinion. Sometimes in these situations, [the personality or celebrity] is not sure what they want, and knowing what you want is half the battle. Building a team to take her vision and turn it into commercially sellable product is what we’ve done,” said Stupp.

Stupp, who has engineered something of a turnaround at Cherokee during his two-year tenure, plans to amp up business even more with Alé.

“We are looking at the middle market for this brand because, all over the world, it’s the fastest-growing area and it’s not being properly addressed. So we’re putting a lot of thought into every item so it’s not a one-off piece of poor quality. The customer wants something fashionable and affordable that will last from season to season,” he said.

Cherokee has built a dedicated team of designers, print and textile specialists to create the looks, and plans to leverage its global network of suppliers and retailers to get quality product at a quicker rate. “Rather than have each country have their own supply and interpretation, this brand is being designed from the beginning as a global opportunity and we are building all of the product in collaboration with our selected retail partners or licensees to ensure that we can get scale, which is really important when you are building a brand,” he said.

As for how much he hopes Alé will sell in its first year, Stupp said, “It’s too early to tell and we’re not in a rush. I think it will be a little slower than the Camuto-Jessica Simpson growth because the U.S. is really saturated right now, so we will be extremely selective of how we roll out our strategy here. Obviously Latin America is a key market and our first point of entrance so we want to make sure we are strongest there and then we will slowly expand.”