A decade after launching C&C California, she is back with a new line and boutique that reflects her now-grown-up aesthetic. 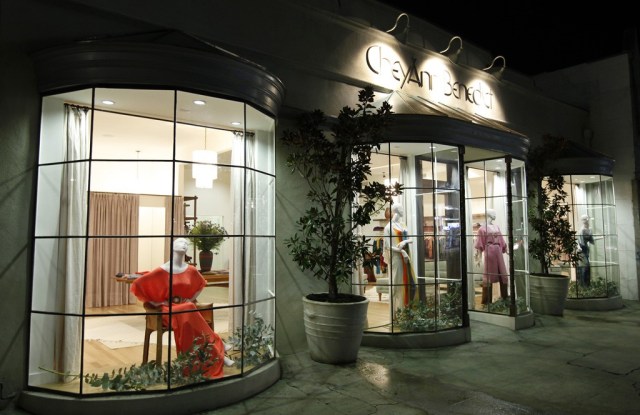 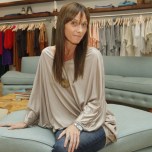 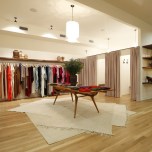 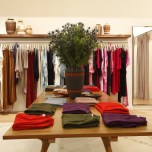 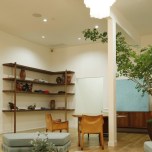 LOS ANGELES — A decade after launching C&C California and helping to define the California casual lifestyle, Cheyann Benedict is back with a new line and boutique that reflects her now-grown-up aesthetic.

The 30-stockkeeping-unit Cheyann Benedict line, which makes its debut this month in a 1,400-square-foot La Brea Avenue boutique by the same name, comprises cashmere sweaters, rayon T-shirt dresses, printed silk caftans, raw silk dresses and trousers, and washed-silk charmeuse drawstring pants. There are, of course, basic Ts, meant to be layered, in every color, but this time they’re made from mercerized cotton with a silky sheen and French seams.

Retail prices range from $80 for a T-shirt to $1,500 for a hand-knit cashmere sweater jacket. While some fibers come from Italy and Germany, the pieces are all made in Los Angeles.

“It’s been a journey,” said Benedict of her life since she and partner Claire Stansfield sold C&C to Liz Claiborne Inc., in 2005, for $28 million. “I left [in 2006] because I felt like I had done what I was meant to do there. It’s a really different experience when you have your own company and call your own shots, and being in that [corporate] environment was difficult. I knew there was a different way to express myself.”

On a whim, she traveled to India for four months, where she became inspired by the colors of the saris and the textiles in the marketplaces. A California native whose mother is Cherokee, Benedict decided to move back to New York, where she had studied art at New York University before becoming an actress. She stayed there for almost four years, studying with mentor Hugo Cory, a teacher of esoteric philosophy, who also taught her meditation.

About four years ago, she started consulting with advisers about her next venture. Two years ago, after she drove by an old house for sale and felt an immediate connection with it, she decided to move back to Los Angeles. She spent the next 10 months renovating and designing her home with an “organic-modern-meets-old-lady” look.

Benedict, who has also made furniture for the last 10 years, transferred that vibe to her store, bringing midcentury art and furniture, her own wood tables and benches inlaid with ground turquoise (also for sale) and custom sofas to the freestanding space. Benedict purchased the 2,200-square-foot building, which formerly housed the costume shop Repeat Performance, because it was one of the few freestanding structures on the established retail thoroughfare, also home to American Rag Cie, Stussy, Steven Alan, among other retailers, restaurants and art galleries.

“It was important for me to stay in Hollywood, and this street is classic; there’s not as much turnover. I’m investing in my future and creating a situation to root myself somewhere,” she said, noting that she is the sole owner of her company.

A year ago, she began designing the line and the store in earnest, aiming to create the perfect T-shirt, pants, dress and so on. “I’m drawn to pieces that you can buy over and over, in every color, like the classic C&C T,” she said. “And I still like comfortable, wearable clothes, but this reflects 10 years of growing up.”

The long silk caftan dresses, ranging from $400 to $850, feature her own digitally produced prints and come in a range of bright and neutral solids. Solid raw-silk dresses feature slouchy pockets, subtle draping and deep armholes that slyly expose the sides of the body. Bottoms range from raw-silk wide-leg and cropped cuffed trousers to washed-charmeuse genie, cropped pajama and ankle-tie drawstring styles. There are also basic cashmere sweaters and matching “sweatpants,” along with the Ts and tanks in a range of colors.

Alongside her apparel, Benedict offers leather handbags and belts from Los Angeles designer Samantha Grisdale, woven cotton scarves and woven leather and beaded jewelry from Mexican artisans, and her own extensive collection of vintage Native American jewelry. She also plans to collaborate with Rachel Craven Textiles, as well as artist Sage Vaughn, on prints for new pieces.

Benedict intends to launch an e-commerce site next month and will eventually wholesale her line, but she’s in no hurry. She also declined to project first-year sales. “The essence of my marketing strategy is more organic,” she said.

“What I learned from C&C is that if you choose authenticity over chasing a trend, you have a different kind of confidence. Los Angeles is still the land of opportunity; here you’re more able to catapult things off the ground.”