The Italian designer has struck a chord with a fashion perennial — the little dress — and she’s now ready to export the formula to the U.S. 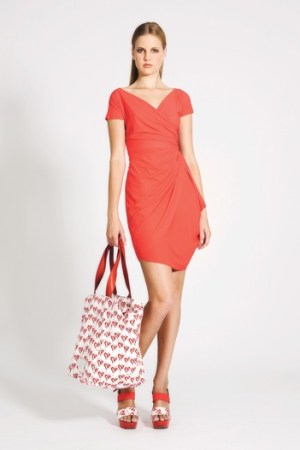 MILAN — Italian designer Chiara Boni has struck a chord with a fashion perennial — the little dress — and she’s now ready to export the formula to the U.S.

This story first appeared in the November 19, 2010 issue of WWD. Subscribe Today.

When in 2007 the Florentine designer returned to fashion after a three-year hiatus, during which she served as district councillor for Tuscany, she was looking to start a small and focused project. So she launched La Petite Robe, a collection of dresses made exclusively with a polyamide-and-elastane blend trademarked by Italian mill Eurojersey. The stretch fabric — which hails from the sports world — is antiperspiration, antiallergy and allows the body to breathe.

“I wanted a product that reflected today’s chaotic lifestyle and the real needs of women who travel constantly. You can squish these dresses in any corner of your suitcase because they don’t wrinkle,” said Boni.

They will also get you through a dawn-into-dusk agenda by simply changing the accessories.

Although the collection grew to include snug belted coats and a small offering of T-shirts and leggings, Boni stuck to her one-fabric focus, now fashioned in three different weights.

For spring, Boni has added printed silk details to the line, which ranges from slim-fit dresses to versions with drapes, ruffles and bias cuts.

Businesswise, La Petite Robe is seeking to double current sales of 2 million euros, or $2.6 million, each year over the next three years.

The line is carried in the best Italian specialty stores, including Milan’s La Rinascente, Russo in Capri and San Carlo in Turin.

Since Maurizio Germanetti came on board as chief executive officer, the strategy is to expand in Europe and the U.S., where Boni teamed up with Anthony Vecchione, owner of VDM, a company that distributes fashion in the U.S.

“We want to penetrate and invest in the more mature markets because we feel they are more receptive to our product,” noted Boni.