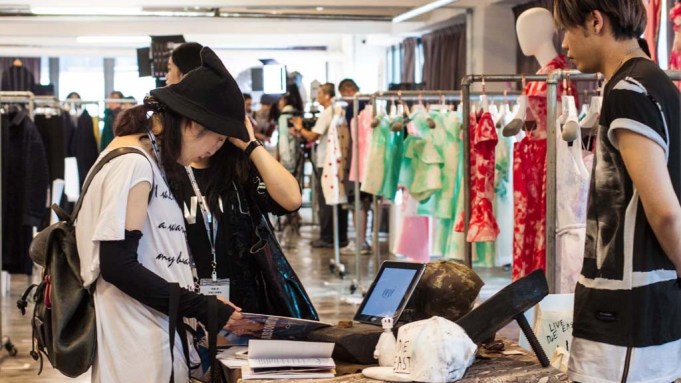 Chinese labels were a more noticeable presence at the third edition of the semiannual The Hub trade show, held Aug. 27 and 28 here. Founded and produced by Hong Kong-based British expatriates Richard Hobbs and Peter Caplowe, The Hub showed 100 apparel and accessories labels from more than 18 countries including China, the U.K., Italy, Belgium, Australia and the U.S.

The two have extensive experience matching Western brands with Asian distributors and started the fair as a way to match fashion brands, particularly those based outside of Asia, with multilabel stores. But it’s not just Western labels that are looking to make inroads in China and elsewhere in Asia anymore. As the Chinese retail market matures, the country’s consumers are starting to look for something different and Chinese designers and brands are getting more attention.

Organizers said there were 1,500 visitors at the fair, about 200 from mainland China and a healthy contingent from Hong Kong, as well as contingents from Singapore, Korea, Japan, Taiwan, the Philippines and Australia. Buyers represented retailers such as I.T, The Swank, Lane Crawford, Harvey Nichols and Kapok.

The first two shows were held at AsiaWorld-Expo but for this edition moved to D2 Place, a new shopping mall in Tai Chi Kok, Kowloon. While traffic was light, many of the Chinese exhibitors generated a fair amount of buzz, and a number of exhibitors from China and other Asian locales said they were interested in expanding out of their home markets and more deeply into Asia and, to a lesser extent, Europe and North America. Some of the Western labels exhibiting complained that they hadn’t met many buyers, a disappointment for those hoping to move beyond limited distribution in the region.

One busy exhibitor was Damn Precious, a jewelry maker from Beijing that makes its wares using a 3-D printer. Designers make a larger model first, which is then replicated using the 3-D printer. This allows for far more detailed and intricate designs than traditional methods. The two-year-old label currently sells through independent boutiques in Beijing and Shanghai as well as online on Taobao, but hopes to expand to mature markets such as Japan or Europe, said marketing manager Lulu Lu. Damned Precious’ quirky designs, which include pendants featuring a dung beetle or a brain, aren’t appealing to the mass market, Lu said. Designs are made in small batches, almost like a capsule collection, with prices ranging from $80 to up to $500. The jeweler also intends to sell through its own Web site soon.

Another Asian label hoping to ramp up its presence in the region was Danjyo Hiyoji, an Indonesian clothing label that currently sells in Indonesia as well as through boutiques in Singapore and Perth, Australia. It plans to expand in Hong Kong. It also sells online through its Web site.

Asian and Chinese labels were not only a big presence on the exhibition floor but dominated the conference schedule as well. Panels centered around growth of the Chinese domestic fashion and retail business as well as growth of Chinese brands and multilabel stores. During one session, Chinese designers discussed the evolution and development of Chinese fashion and design.

Designers agreed that while domestic Chinese fast fashion lags behind the likes of H&M or Zara and is often imitative, there’s been a dramatic evolution from 30 years ago. Designers also agreed that it is hard to define what constitutes Chinese design.

“It used to be traditional patterns or design. But culture comes from all places; it reflects our lives, colors, food, habits, religion. These are all aspects of design. There is no need to copy old Chinese designs,” said Yuan Guoxiang, a teacher at the Institute of Textile and Clothing at the Hong Kong Polytechnic University.

Both winter and summer collections were displayed at the fair. Florals and prints were out in force, as were chunky knits and distressed denim.

Dates for the fourth edition of the fair have not yet been announced.

Discussing the move to D2 Place, Hobbs told WWD, “The new venue only came online early this year and we immediately felt that it was right that we would actually evolve The Hub to fit the building.”

He noted that the facility is “in the heart of the traditional garment district of Hong Kong” and is a renovated industrial building that’s home to the Fashion Farm Foundation, a group that supports and promotes Hong Kong designers on an international scale, “so there were lots of synergies and shared agendas.”