Organized by Pitti Immagine, the four-day ready-to-wear and accessories show closed on Sept. 22 in Milan.

MILAN — A Mediterranean mood, jungle-inspired colors and new designers, who are deeply committed to the environment stood out at Super, the four-day accessories and ready-to-wear trade show that closed here on Sept. 22. More than 5,800 buyers from 50 countries attended Super, which is organized by Pitti Immagine. One-hundred brands exhibited at the show, of which 40 percent came from outside Italy, presenting their spring 2020 collections. The fair closing figures showed an increase in the number of Italian buyers by 1 percent and a slight slowdown in the number of international visitors, 20 percent out of the total, especially from Japan, Germany and Greece. Despite this, Japan remains the target market of the trade show, followed by France, Spain, Germany, Greece and the U.S.

An installation by Italian designer Vivetta Ponti welcomed Super visitors this year: a world of colors, pink flamingos and plants were the framework for the debut of her footwear collection. Color was also key for Alessandro Enriquez, whose collection was inspired by a “New Eden” where two lovers live in a kind of symbiosis with the animals of a jungle. The couple’s kisses are turned into animal spots, hearts into snakes and stars punctuate the skin of giraffes. “This year we want to go further and boost our production and distribution thanks to a license with Grazia Bagnaresi,” said Enriquez of the the Italian company, which will produce and distribute his creations, focusing on Russia, Asia, the U.S. and Mexico in particular. Denim production will remain in Tunisia. (His father is Spanish-Tunisian.)

Young designers Stefano Dassù and Pasquale Amoroso founded their Dassù y Amoroso brand one year ago. They firmly believe in the “I am what I am” philosophy, which is translated in a genderless collection where bold colors such as fluo pink and green are mixed with black. With an underground vibe, the collection’s main materials are nylon, vinyl and cotton, while a tartan fantasy is digitalized for a more contemporary effect. Protecting the environment is a concern for Dassù and Amoroso: “We recycle as much as we can,” Dassu’ said. “Not only do we use the leftovers from our production but also those from other companies, thanks to the partnerships we have.” Production takes place in Pavia, Italy, about an hour from Milan.

Young designer Stefania Marra’s brand STMA stood out with her colors, too, as well as her vintage research both on fabrics and shapes. “This time we added a kind of surreal mood inspired by ‘The Wizard of Oz,’” Marra explained. “We have implemented our knitwear, also playing with materials like Lurex and patent leather effects, always staying true to our vintage inspiration,” by choosing Fifties and Sixties models. The collection is produced in Italy, and, in addition to a loyal local customer base, it performs well in South East Asia and in Shanghai, Marra said. 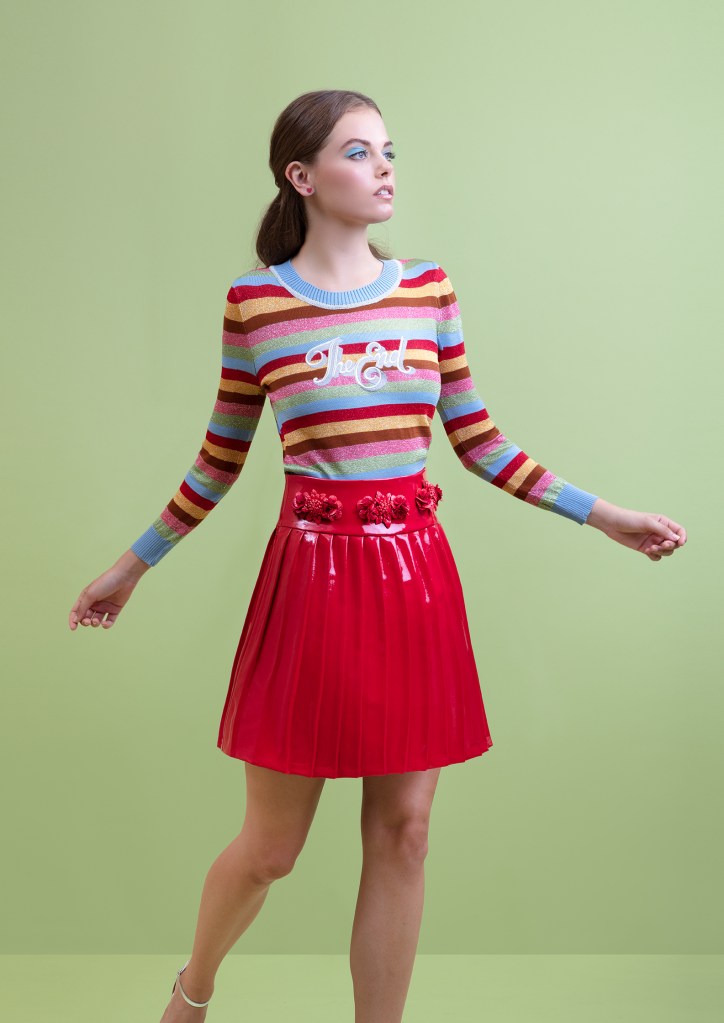 A look from the STMA brand.  courtesy image

At Dafdesign, designer Fernando Pezzuto, whose bags are inspired by old Italian clutches, presented his new shoe line, inspired by Southern Italian clogs and sandals. Pezzuto works with recycled old bags and tapestry on both categories.

Leonardo Macina, who has just launched his own brand Kianis after a career in the fashion industry, introduced a collection of shoes whose soles are made with recycled and biodegradable plastic, “so they don’t release waste into the environment while walking,” he noted. Also, packaging is made of recycled paper and plastic. “When I designed this first collection, I thought about how beautiful walking and running on the sand without shoes is, so I chose a very comfortable kind of sandal, while production is carried out by a company specialized in health shoes,” Macina said.

Careful attention to both the environment and the workers’ life is pursued by Liv Ramanandraibe with his accessories brand Ibeliv. Born in Madagascar but France-based, Ramanandraibe was motivated by the effort to create “a humanly and ecologically responsible production,” and to improve women’s quality of life in his country, following in his mother’s footsteps. Ibeliv bags are made by using local raffia and handcrafted by Malagasy women. That’s why the production comes in moderate quantities, as a bag can take up to one week to be made. The designer supports the Manampy charitable organization helping families by supporting education and training.

Alessandro Gherardeschi, whose colorful hand-painted collection of shirts and T-shirts are made in Tuscany, said business continues to slowdown in the U.S. “while the performance in the rest of the world is patchy, from France to South Korea.” He also addressed the relevance of trade shows. “Although we showcase our collections at the most important fairs, I do think this format should be reinvented as word-of-mouth is becoming more important than acquiring new clients at the trade shows.”

Conversely, Japan-born designer Maria Icho, based in Milan, strongly believes in the role of fairs: “They are really important to us as we can meet most of our clients and strengthen our relationship with them,” she said. The clean lines of her brand Ma’ry’ya are well-appreciated in Europe, Japan, South Korea and the U.S., she noted. “The inspiration comes from a modern working woman who likes a simple elegance and clothes easily wearable all day long as a passe-partout,” the designer explained. Organic cotton and wool and silk are the main fabrics used by the designer and the production is Italian. “I only choose what I like to wear every day, so I use natural materials as they come into contact with the skin and the design is always comfortable yet very elegant, characterized by neutral colors and broad shapes.”

Super’s first floor was dedicated to young talents once again. This edition they came from Armenia, the U.K., Italy, France, Kuwait and India. Roma Narsinghani is an Indian jewelry designer, and after studying in London and Milan, in 2016 she rediscovered all of her homeland fashion and jewelry traditions with her mother. On that occasion she reinterpreted some of her family pieces and decided she could give life to her own collections by using reclaimed brass. This is still the main feature of her work: “Our base material is recycled brass, which is handcrafted by Mumbai and Jaipur local artisans,” Narsinghani observed.

“We buy all of our materials from the local communities to support small businesses, and we don’t waste anything, as our leftovers are used by our artisans or by recycling companies in Mumbai,” she said. The result is Indian-inspired jewelry, where the energy of Lord Shiva meets the grace of Goddess Parvati and geometrical shapes are combined with the fluidity of a “dance rhythm,” she mused. Narsinghani’s creations perform well not only in India — drawing the likes of actress Sonam Kapoor Ahuja — but also in Lebanon and the United Arab Emirates.

Half-Indian and half-Norwegian but born and raised in Paris, 23-year-old Helena Bajaj Larsen presented her hand-painted, artistic collection. The designer buys raw fabrics from India (cotton in particular), paints them personally and with these she creates shirts, trousers, coats and dresses. “Each piece is kind of wearable art, which takes me a long time to produce but gives me a lot of satisfaction,” said Larsen, who has also explored the world of jewelry by using different kinds of metals. Shortlisted by international fashion awards such as Grazia Young Fashion Achievers, she now lives between Paris, Dubai and Mumbai.

The Super Talents hub featured other jewelry brands such as Alighieri, founded by Rosh Mahtani (born in London, raised in Zambia and graduated at Oxford) and inspired by her passion for Dante Alighieri. Nine Armenian talents skillfully blended Caucasian traditions and modern designs, such as loom weaving for example, by sisters Inga and Elen Manukyan, which stood out for its natural interlaced yarns and its braiding work, while Aram Nikolyan’s handmade floral embroideries were also showstoppers.