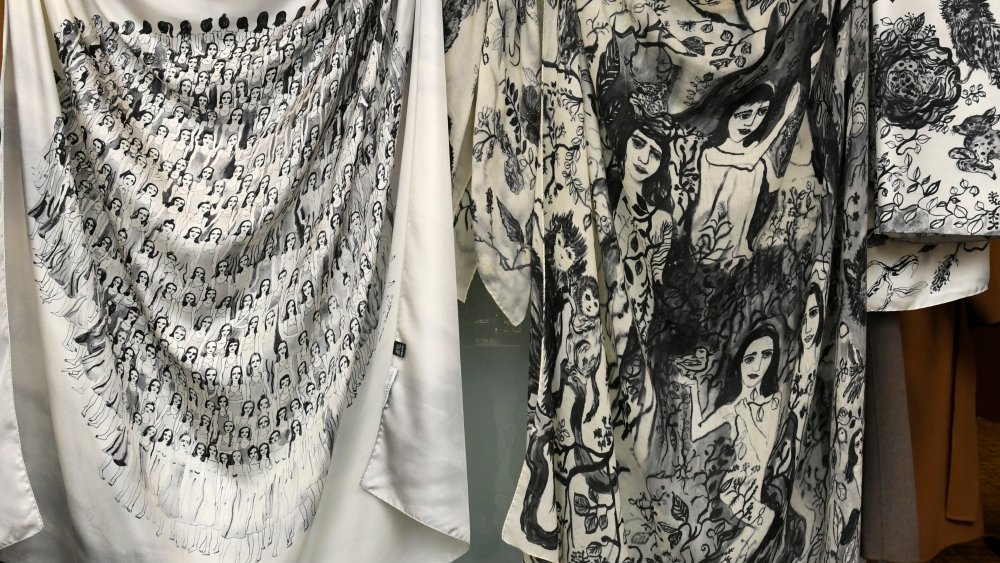 “No more black and gray, but let’s stay safe and throw in one extra color, like red,” said Cheryl Assil, a buyer for the Los Angeles-based designer clothing store Madison. “I think it’s going to be fun!”

“I love the pattern mashing. There are a lot of mash-ups of this and that. Color has just exploded,” Jill Donnelly, owner of Seattle-based designer clothing boutique Baby & Company, said while visiting Tranoï. “It seems like the Gucci collection has just given everybody a license to throw whatever you want at it.”

Donnelly cited The Gigi’s collection among favorites. “I love the tomboy sensibility,” she said. “Suiting is really big, and I thought they did it in a way that was fun, with beautiful brocades, but there was a really modern, masculine cut.” She also liked the folk-inspired Péro by Aneeth Arora collection for its “sense of humor” and slow fashion, hand-crafted elements.

“Things are a little bleak and dark, especially for us in the U.S., so I was compelled to [go for happy items] with a lot of color. There seems to be a little bit of humor in fashion again, and we need it,” said Donnelly. “The Trump effect has really affected my business. I had a 45 percent decrease in November, it was harsh. I think people were absolutely devastated. It was an ache that a pair of shoes wasn’t going to take away. Fear is never healthy…So be bold, be brave and make a statement with your clothing, damn it!”

Mina Ozlen, a buyer for Galeries Lafayette and Harvey Nichols in Turkey, noticed “there’s a lot of fur, for sure, and pink is coming. It’s a good thing. Most women like it.” She joined a throng perusing the colorful, fur-heavy selection of tops at Inès Maréchal’s booth at Tranoï.

“Right now the economic situation is a little bit tricky in Turkey,” Ozlen said. “So we prefer to take [small] steps…People are very sensitive about what to buy. They prefer timeless pieces. They prefer coats and knitwear.” She said her overall budget was flat, with cuts for slow-performing brands.

Other trends included “a lot of work with velvets, a lot of winter pajama twists, velvet pajamas, prints, inside-outside loungewear items, which was pretty strong,” said Jennifer Cuvillier, style director at Le Bon Marché. She felt most of the ready-to-wear collections were consistent with previous seasons.

Some fall trends met with resistance. The fur fervor was unnerving to some animal lovers, and the in-vogue, bulky sweater was not for everyone.

“The chunky sweater – she doesn’t wear it,” explained Helaine Strauss, owner of The Nines in New York, referring to customers. “It’s hard to wear with a jacket, and it’s hard to wear it indoors. And that’s the problem. The customer wants more lightweight items that she can wear out for dinner. My customer goes out to dinner seven nights a week, and she wants tops. Every night, a new top.”

“Unique pieces. That’s all it’s about. Basics are over for me,” she added, noting changing weather required “a different category of lighter-weight coats” lasting until December. “I’m going to try below-the-knee coats for the first time. I think that looks new.” Strauss was excited by the PHP coat collection at Tranoï, an Italian brand in its third season, which maximized on mixed media, including repurposed vintage scarf elements, military jackets, lace and hand-painted flourishes, plus messages on leather.

Referring to the distressed fabric trend, Bonnie Wilson, a buyer for Weinstein’s in New Orleans who was visiting Paris sur Mode, said, “I have a better grasp on the roughed-up look, and how to translate that to our customers. Our ladies have had trouble making the transition from a more lady-like look to a more roughed-up look.”

“In the beginning those things were foreign to me, but now I’m dying to wear them,” said the store’s owner, Rosalyn Ditta, who appreciated the show’s less “jammed up” layout.

Buyers hunted for emerging brands with a personal story, often paired with a strong connection to heritage, partly because customers perceive a mismatch between the quality and price of high-end, mass-produced goods. Adaptable and transformable clothing answered the call for more individual and practical fashion.

Examples included cardigans that become different tops and dresses by Cortana at Paris sur Mode, or the tomboy-inspired coats with detachable layers and scarves at DA/DA, Diane Ducasse, who showed at Woman Paris.

“The story of the designer is fundamental to me, and then the quality,” said Marianna Szeib, founder of the Paris-based ephemeral showroom and digital retailer Face to Face. “The more it’s personal, the more it moves us,” she said.

She liked the way designers increasingly specialized and “experimented” with one material, and was struck by Zofia Chylak’s leather bag collection at Woman Paris, with its “graphic and aesthetic identity, wholly its own.” The ready-to-wear collection by American brand Department Five at Woman Paris “was magnificent, very alternative – there’s a real identity there, and you feel they are really bringing something new.”

“I think clients want [something] different,” said David Assil, owner of Madison in Los Angeles. “There’s nothing wrong with globalism, as long as it’s done legitimately. But I think people are feeling that it’s not…It’s kind of the same thing in fashion, people want their own individualistic look.”

That includes designers. At Paris Woman, Mara Hoffman said she had taken her 17-year-old brand in a new, more personal direction. “We were dress-heavy for so long, and incredibly print-heavy, and that’s where a big transition is happening. It’s about wanting to be inspired by the work that I’m still doing. And not just having to sell clothes that I wouldn’t even buy or aesthetically relate to,” she said.

The new collection represented a shift to more sustainably sourced fabrics and more “wearable” interpretations of elegant, carefully crafted basics. Hoffman wore a reversible, long, quilted Tencel denim coat from the latest collection, which could work as a liner, or a statement piece on its own.

Heroes, a concept trade show and pop-up store dedicated to younger brands, presented its inaugural edition in a building located a hop away from Place Vendôme. Highlights included the urban sportswear designs by Pyrates made of “smart fabrics” meant to help protect and moisturize the skin, plus regulate blood pressure, as well as the bright, tailored-yet-sporty line with raw edges by Orphée, inspired by torn Paris metro posters.

The adaptable, bright and crisp circular leather fanny packs by Darris, sculptural, metallic jewelry by Marie Guerrier, and street artist-painted leather jackets by Pierre Rioufol (popular with French rockers) were among other hits.

Inspiration: This was the brand’s most sustainable collection to date, using Tencel, organic cotton and modal. The corduroys are also made with organic cotton, and some cottons are made with artisan groups based in the south of India. “The things we’re doing are done with such integrity and speak to what I actually want to be doing. I’m excited about it,” said Mara Hoffman. The collection was inspired by the designer’s personal style, and a return to her interpretation of basics.

Inspiration: For her third collection, Diane Ducasse drew from a back-to-school, British university theme, imagining a romantic dreamer as her muse. Dadaism also inspires the Parisian designer, hence the brand name. This came through in the playfulness of pieces worn in multiple ways, and the tailored, loose-but-fitted-at-the-waist designs with boyish airs. Edges were left raw, with visible stitching, and colors included natural tones with pops of crimson or creamy yellow.

Key styles: Reversible large coats with removable elements. A layered crimson corduroy top with roomy sleeves, worn unbuttoned and layered over a man’s vest of the same color and material.

Inspiration: Chylak makes bags she would want to wear herself. These elegant bags – popular among Polish models – are carefully crafted in Poland in limited, small series made from natural leather embossed with python and crocodile patterns. The leather and zippers are from Italy.

Key styles: The small, luxe evening bags. All bags have a highly visible, golden stamp showing the model, series number and year of production. Chylak said the stamp was an aesthetic element she chose to make central.

Key styles: “A Gathering,” one of six designs, is printed on 100 percent wool and depicts nude women emerging from twisting vines, flowers, wood creatures and shadows dripped in black ink and watercolor, on a white background touched with gray. All pieces are 50 by 50 inches.

Inspiration: The collection of jackets and coats combined Fifties silhouettes with a Nineties edge, and a bit of hippy bohemia, balancing to form a rock-and-roll yet feminine allure. Repurposed silk scarves served as lining, military jackets had been dyed and transformed, and vintage fur was given a second life. Leathers were hand-dyed and finished, and some jackets had been playfully hand-painted by students from the Florence School of Fine Arts.

Key styles: Furs and shearlings were introduced in a bright, colorful palette, with embroidered flowers blending into the leather and furs through an intarsia technique traditional to Fifties couture. Leather jackets layered with embroidered military jackets and lace trimmings formed an instant, all-in-one ensemble.

Inspiration: Travel and folk themes from Latin America and Asia dominated the color-rich, hand-crafted collection accented with bold, playful neon floral embroidery, pom-poms, tassels and beads. Denim blues were a recurring backdrop, as well as creamy white. All fabrics and trims are of Indian origin.

Inspiration: An active lifestyle in an unhealthy urban environment led Polanco to create a sportswear line that not only feels soft and silky, but is meant to help protect and moisturize skin, as well as regulating blood pressure through its fibers. Her smart fabrics contain a cocktail of antioxidants including seaweed in SeaCell fibers from Iceland.

Key styles: The mostly black collection focused on breathable sportswear like the Kalaf hoodie in a smart fabric with a horizontal cut and zipper on the side, ideal for winter sports.