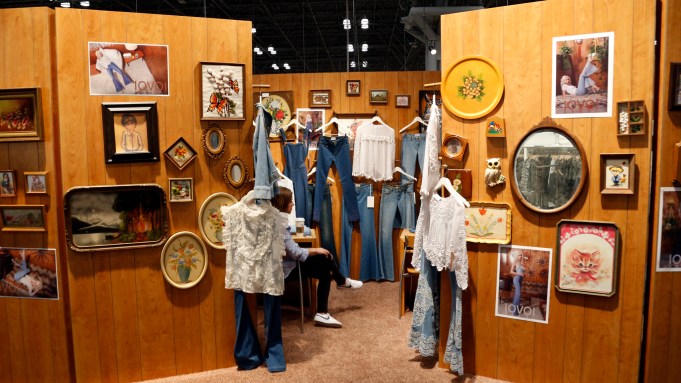 NEW YORK — Lots of color, Victorian lace, collegiate and polished men’s wear looks, and textured sweaters were evident in the fall collections shown at Coterie, the three-day show that ends Wednesday at the Jacob K. Javits Center. The show spanned three floors and featured over 1,400 designers of women’s ready-to-wear, accessories and footwear.

Joannah Hillebrandt, owner/buyer of Kiki Nass, a specialty store in Austin, Texas, came to Coterie to buy casualwear that can be dressed up. She was also searching for kidswear from some of her core brands, such as Rails.

“We’ve become an urban-casual store,” said Hillebrandt, who was seeking easy-to-wear pants, such as silk joggers that can be worn with a heel or flip-flops. “People live in flip-flops in Austin,” she said.

Among the lines she was purchasing were Lauren Moshi, “which had fun graphics and a sense of humor;” AG Jeans, “which is a total staple for us,” and McGuire Denim, which has a Seventies flavor. She said that she’s seeing a lot of flared denim in the market. McGuire offered a raw-bottom jean that can be altered in the store. Another line she bought was LNA T-shirts that can be worn with everything from a sexy sequin skirt to jeans or sweatpants.

Judith Rudman, co-owner of Seed 387, a 2,000-square-foot specialty store in Millburn, N.J., said she was shopping for accessories, cover-ups and unusual sweaters with an edge for their lifestyle boutique. “Everything has to have a little twist to it,” she said. She liked Angel Apparel’s sweaters with smiley faces, peace signs and an ampersand. She called Coterie “a great show; we bought a lot of stuff,” she said, including cute printed tops at Alice & Trixie and cover-ups at Melissa Odabash and Amaya.

Raquel Gershon, owner of Porta Romana, a specialty store that sells contemporary and designer sportswear based in Panama, said she was buying Avenue Montaigne, The Kooples, Current/Elliot and Cynthia Rowley at Coterie. “I love the show. I would have preferred if it started on Sunday than Monday,” she said. From Avenue Montaigne, she bought mostly skirts and pull-on pants. “I love the wide-leg pant,” she said.

Debra Couch, owner of Debra Co., a 6,000-square-foot women’s specialty store in Carmel, Calif., felt the show has become overwhelming. “It’s gotten too big and it’s taking too much time,” she said. She was able to find several Italian brands she liked, such as Musetti, which has cashmere sweaters, cardigans and crew necks. She also liked the novelty sweaters at Richard Grand. “Color is a big thing for fall,” said Couch. “I can’t believe all the color. There are lots of greens and gold.”

Gilda Baker, owner of Gilda’s in Newton, Mass., agreed that the scale of Coterie has become too much. “It’s too big and there’s nothing exciting,” said Baker. “I end up doing the same lines.” She was looking for unusual things that are not widely distributed for her 2,000-square-foot store. “It’s too overwhelming. They mix too many inexpensive lines with regular lines, but we chug through,” she said.

Among the exhibitors, Judi Lambert, a designer of Lovol Brand, said she launched her business only five weeks ago. The brand is mostly denim, which is manufactured in Los Angeles, with some looks manufactured in India. Skinny jeans wholesale for $76, and those trimmed with embroidery wholesale for $198. Embroidered and beaded white tops were standouts.

Cinq à Sept also used Coterie as an opportunity to showcase its brand, which launched for pre-fall. Jane Siskin, chief executive officer of the Los Angeles-based Jaya Apparel Group, which makes Cinq à Sept, said, “We’ve been steadily busy. It’s advanced contemporary. It’s on trend, but not trendy with a feminine point of view.” She said the best way to sum it up is “boudoir romance mixed with a little grunge.”

The company, which used to produce Elizabeth and James before the Olsens took the license back, has the infrastructure in place to launch a big business, said Siskin. The line is being sold to stores such as Saks Fifth Avenue, Neiman Marcus, Nordstrom, Bergdorf Goodman, Shopbop and Intermix, as well as 200 specialty stores.

Grey State Apparel is another label that was doing a brisk business. The new luxury apparel collection from sourcing company Noi Solutions hired Monica Forman as executive director last May. She said business has been very good “in an area that’s not oversaturated.” She said the collection offers polished but casual looks in such fabrics as cotton and terry. It hits on many of the trends, such as ruffles and tie blouses. Among the fast-moving items are a track jacket, a double-breasted blazer in terry and a high-low dress.

Hayley Denman, whose company Hayley Style reps different lines for such resorts as The Montage, the Four Seasons Resorts and the Ritz-Carlton, and has her own store in Miami, was shopping Grey State. “We’ve been getting reorders for spring,” she said. She noted that the fringe top did well for them, as did moto leggings and mesh tank tops. “It’s the way people want to dress. You can go out in it, but it’s casual,” said Denman.

Minnie Rose was having a good show selling its fall collection. “Ruffles are hot, and fringe is still in. Ponchos and capes are really strong, ” said Lisa Shaller-Goldberg, the brand’s owner. She noted that spring is reordering well. For fall, she’s introducing cashmere slippers with a fox pompom, which wholesale for $65. They come in such colors as heather gray, antique red, camel, black and white.

Among the misses’ looks she is offering are statement sweaters, big oversize sweaters to be worn with skinny pants and high boots, capes with ruffles, bomber jackets and fringe vests. “We’re looking to grow 30 percent this fall,” she said. Shaller-Goldberg noted that she launched Minnie Rose Woman at Boomingdale’s for spring.

Downstairs at FWD, a DJ was spinning tunes, a photographer was offering to take amusing photos and 12 vendors were selling junior sportswear.

John Kim, the show manager of Renee C, said the brand was previewing fall and mainly selling spring merchandise. He also just flew in from MAGIC in Las Vegas. He said his line is made in Los Angeles, “which is a great selling point for us and our customers.”

Mia Vogt, owner of Indigo, a specialty store based in Hanover, N.H., said she was browsing the FWD collections. “We do a little bit of this business. The people I see here are always at Fame, there’s been a shifting of resources,” she said. She also planned to buy resources upstairs at Coterie such as Rebecca Taylor, Ella Moss, and Alice & Trixie.

Susan Israel, owner of Entrée, a specialty store in Port Washington, N.Y. said of the FWD brands, “You can get great finds here. I’m looking for summer clothes.” At Coterie she liked such brands as Cupcakes and Cashmere, Sanctuary and Haute Hippie. She was seeing a lot of fringe and texture throughout the show, from the high-end to the low-end.