Contemporary Heats Up in Japan

A flurry of activity is occurring within this segment, which taps into Japanese consumers’ penchant for strong design at an accessible price point.

By Amanda Kaiser and Kelly Wetherille on April 3, 2013
View Slideshow 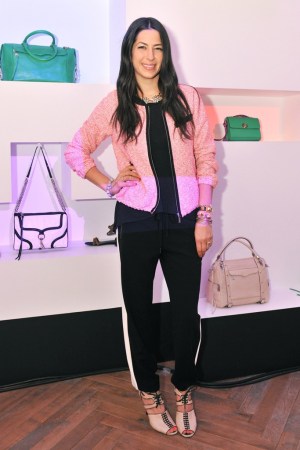 TOKYO — Contemporary brands appear to be thriving in Japan.

A flurry of activity is occurring within this segment of the market, which taps into Japanese consumers’ penchant for strong design at an accessible price point. Just a few weeks ago, both Michelle Smith of Milly by Michelle Smith and Rebecca Minkoff hosted events here, meeting their customers and cultivating contacts with Japanese fashion editors. Meanwhile, Vivienne Tam made her first visit to Japan in five years to take part in last month’s Japan Fashion Week and celebrate doing business here for 15 years.

Isetan recently renovated the second floor of its Shinjuku flagship to accommodate a host of contemporary international brands such as Vanessa Bruno, Paul & Joe, A.P.C. and Vivienne Westwood Red Label.

Hiroshi Onishi, president and chief executive officer of Isetan Mitsukoshi Holdings Ltd., said that “new” contemporary brands targeting women in their 30s and 40s, such as Tory Burch, are seeing the most sales growth at the Isetan Shinjuku store.

“I think finding these brands and introducing them will become something of a lifeline for us,” he said. “Luxury brands are everywhere now, and I think they’re important, but I think now we have to nurture those midlevel designer brands that are growing and will continue to grow. We have learned that, at our Shinjuku store for example, these brands attract the most customers.”

Onishi said that part of the reason that contemporary fashion has come to play an important role is that most European luxury brands have shifted their focus to accessories and, in a certain sense, neglected the needs of some consumers.

“The question has become where to get [fashionable apparel]. And while luxury brands are still fighting very hard for this, the slightly lower [priced] brands are starting to sell well. I’d like to see luxury brands really focus on clothing, but the accessories just keep getting stronger and stronger,” he said.

Japan’s embrace of unique, contemporary fashion mirrors the market trend in the U.S., where many of the segment’s brands are based.

Milly has been selling in Japan for 11 years, and for the last five, the brand has partnered with Itochu. It currently has one flagship and two shops-in-shop in Japan, and the brand plans to open three more shops-in-shop this fall. Milly posted 13 percent sales growth in Japan last year and plans to grow an additional 10 percent this year. The brand does an annual business of about $6 million in Japan.

“The contemporary market is definitely exploding,” said Michelle Smith, co-owner and designer of Milly, before hosting a cocktail party at the Tokyo American Club. “As to why, I’m not really sure. I think it has something to do with wanting to dress as individuals and the price points. It’s still aspirational and attainable for more people than high-end designer, and it’s more individual than mass market.”

Minkoff, who last month visited Tokyo for the second time in four months to celebrate the one-year anniversary of her Ginza flagship, noted that contemporary brands have evolved over the past decade to have more distinctive identities, rather than just distill designer trends into more affordable price points. Her store is located in the same neighborhood as both the Tory Burch and Nanette Lepore stores.

“Japan does set a lot of trends, but I think I saw the contemporary market shift in the States first from what I thought it used to be,” she said.

Minkoff said she has enjoyed seeing the new and different ways Japanese consumers wear her clothing.

“I think to a fault, sometimes the customers in the States can maybe show too much skin, and here it’s like showing the right amount of skin. I also think there’s a layering that occurs that doesn’t in the States, and I like a layered look,” said the designer, who has enjoyed prominent editorial space in the Japanese version of Vogue Girl.

Rebecca Minkoff declined to disclose sales figures, but the company is experiencing triple-digit sales growth in Japan at the moment. The company, which has partnered with Tokyo Style for the Japanese market, has two freestanding stores in Japan and seven shops-in-shop. The company plans to open at least three more shops-in-shop this year and a third flagship in 2014.