PARIS — The coronavirus thinned out attendance at the recently wrapped editions of the Tranoï and Woman ready-to-wear trade shows, adding another strain to an already challenged market.

Boris Provost, who was appointed president of Tranoï in September 2019 as organizers seek to reposition the event amid sweeping changes in the industry, confirmed a marked dip in visitors, “especially from Asia and Italy,” but declined to share numbers. “It was very quiet, there were empty alleyways,” conceded Provost, who in the coming weeks will announce a new format for the trade show’s next edition in September, likely involving fewer venues and a more streamlined premium fashion offer.

“The market is demanding new formats and services, with a stronger focus on digital, although we will always need the physical dimension as fashion is something you need to touch and see, and you need to meet the designers behind the collections,” said Provost. “We are still in the process of digesting this show. The exhibitors were fearing the worst, so some were happily surprised by the turnout, but the brands are very worried about the future.”

Among the casualties, Vendôme Luxury, the niche fair focused on high-end women’s collections that launched in 2003, has closed its doors. The B2B trade show format is “no longer relevant” in the eyes of founder Carole de Bona, who is readying to launch Bel Ouvrage, a new B2C salon dedicated to high jewelry. Presenting around 20 luxury brands, it will launch in April at the Le Richemond hotel in Geneva, alongside the Geneva Watch Days event.

“All of the salons are struggling; everything takes place on the social networks nowadays. At our September edition, I could see that things weren’t going well: The exhibitors were seeing the same old customers, and any of the new retailers who came scouting independent lines to complement their offer had a limited budget, as the major brands impose huge minimums,” said de Bona.

Bel Ouvrage will be a nomadic concept, showing alongside cultural events in Paris, Monte-Carlo, Geneva “and possibly other cities.” “We will show once a year, in line with the slow luxury movement, and will also present vintage pieces, with a sustainable approach,” de Bona said.

Woman saw a 20 percent dip in visitors, according to Antoine Floch, the trade fair’s cofounder and director. “But we still pulled off a good show, even if the situation is very particular; we had fewer buyers but from the best stores, and brands actually did some business, with lots of orders made on the spot,” he said. The fair welcomed a group of Estonian brands, with among the highlights MÕLÜ, a label inspired by life in the islands in the country’s north in the Thirties, with a focus on handcraft with prints and finishes inspired by the local natural habitat.

Several buyers and exhibitors commented on how quiet the shows were.

“It feels really empty. We were just in this big showroom, Rainbowwave, and all the Americans and Italians have canceled their appointments. It’s the first time I’ve seen that, it’s pretty creepy,” said Emma Sawko, cofounder of the Dubai concept store Comptoir 102 as well as the Paris-based chain of healthy eateries, Wild & the Moon.

Among key trends for the fall 2020 season, Sawko cited fringes, feathers, cloaks, oversize jewels, XXL belts, faux fur, the Seventies and disco, filtering down from the runway “with sequins on our clothes as well as glitter on our faces,” even if the outlook for retailers and brands lacks sparkle. “When you see morosity around you, it doesn’t really make you want to spend, so we’ll be quite cautious. My stores are still full of people, but what’s going to happen next?” she said.

Visiting booths at Tranoï’s Carrousel du Louvre venue, Barbara Horspool, buying director for The White Company, said she was surprised by how packed the train was coming over to Paris from England. She was scouting brands that could nicely complement the brand’s private label lines.

“Yesterday I asked my colleague if she was still happy to go, and she said ‘yes,’ because we wanted a day out of the office,” quipped Horspool. “We did Première Vision, so we knew that lots of people were doing ridiculous things, like Marks & Spencer had stopped their team from coming, and suppliers weren’t allowed to go back into their head offices if they’d been to PV. I counted 11 masks at PV; I’ve seen one today,” she said.

For designer Tamuna Ingorokva, founder of the sustainable Georgian label Ingorokva, which presented a capsule of dresses made from eco-silks at Tranoï, the turn of events was “a bit of a disaster.”

“We’re all here working, but a lot of buyers have canceled their appointments. They’re asking me to send the look books digitally, but that’s never good for sales. You need to be able to touch the pieces and see them on the mannequins,” she said.

“The first day was very busy, we’ve had top buyers. Surprisingly, we’ve had a lot of orders from the U.S. We were all laughing about the fact that we had to come to Paris to meet stores from New York and Massachusetts,” said Harnick. “People are thinking that they’re not traveling, but they’re still traveling.”

The Dualist
Designer: Anna Guerin
Background: Introducing a modern spin on authentic Donegal tweed, the Dublin-based tailoring label specializes in luxury tailored coats for women. Each piece is hand-cut and sewn by tailors based in Europe, working with a small family-owned company that produces for brands including Burberry. All of the tweeds are exclusive, woven by fifth-generation weavers based in Ardara, Donegal, using yarns that are spun locally in Kilcar. Founder Anna Guerin brings over skills acquired working in the equestrian-wear field, a design challenge “where the textiles and the cut must perform effortlessly” and the rider needs to look impeccable. Her soft, lightweight coats sport relaxed, oversize cuts and drop shoulders. “Many tailored coats can make the wearer feel restricted within a heavy structured shell. Our aim was to create a contemporary unstructured coat that moves effortlessly with the body,” said Guerin. “We carefully considered every component by exhaustive trialing during the prototyping phase.”
Retail prices: $850 to $975 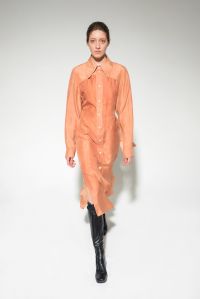 Ingorokva
Designer: Tamuna Ingorokva
Background: The sustainable Georgian brand, whose celebrity fans include Lady Gaga and Gigi Hadid, presented a capsule of soft and feminine silk dresses with crystal embellishments made from eco silks by Colors of Caucasus, a Georgian start-up specializing in sustainable mineral- and plant-based dyes. “When we launched in 2002, we were the first sustainable brand in Georgia. Back then, the border was not so open, but with all the buzz around Demna Gvasalia and sustainability, we’re getting a lot more exposure,” said founder Tamuna Ingorokva.
Retail prices: $485 to $660 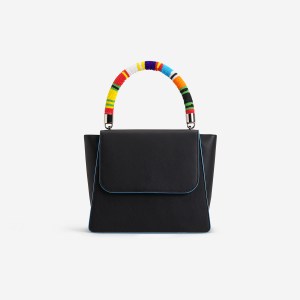 Scopinaro
Designer: Ornella Scopinaro
Background: The new Barcelona-based handbag brand presented its African-inspired collection, La Danza, featuring vibrant handmade beaded handles. Designer Ornella Scopinaro said the idea struck her after seeing the wares of an African bracelet seller on Caldes d’Estrac, one of Barcelona’s beaches. The handles are made in Africa, working with a group of women based in Timbuktu, Mali, and the bags are made in Ubrique, Spain’s leather goods capital.
Retail prices: $510 to $670

Donna Wilson
Designer: Donna Wilson
Background: The new collection marked a shift away from the quirky faces and creatures the designer is known for to a more abstract direction. The designer also worked with a dyer in Ireland, Kathryn Davey, who produced three new colorways for basket-weave sweaters and scarves using natural plant-based dyes: Cutch (a golden yellow), Madder (a soft pink) and Indigo (a deep blue). As each piece is dyed by hand, the colors and shades vary and each edition is unique. The designer, who has a signature furniture line in the pipeline, also brought back one of her classic mountain peak designs for her line of signature Fair Isle yoke sweaters.

Arpenteur
Designers: Laurent Bourven and Marc Asseily
Background: The Lyon-based men’s wear label helmed by cousins Laurent Bourven and Marc Asseily launched its women’s line at the show: a mirror reflection of its men’s collection with tweaked proportions. The brand is known for its locally made, vintage-inspired pieces based on authentic French garments, with a strong marine influence. “We wanted to create pieces we like using French savoir faire but from our point of view,” said Bourven.
Retail prices: From around $265 for a cotton jacket to $530 for a wool coat. 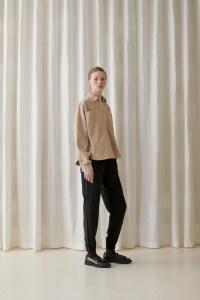 Skall Studio
Designers: Julie and Marie Skall
Background: Danish sister act Julie and Marie Skall designed for a range of local fashion brands — “where we got to experience the not so pretty side of fashion” — before launching their own label. Their mission: creating a collection that was sustainable without compromising on aesthetics, something which they found was lacking on the market. The aesthetic has that clean, Scandinavian feel but is highly feminine, with vintage influences. All of the knits are made in Denmark. Highlights include dresses, cotton pajamas and ruffled organic cotton blouses with broderie anglaise trims, inspired by their stock of antique nightgowns, with a few children’s pieces sprinkled in. They also develop their own textiles, including linens and organic cottons in stripes and checks.
Retail prices: $120 to $450

Myssy
Designer: Anna Rauhansuu
Background: The farm-based Finnish label’s waterproof, lanolin-lined beanies are hand-knitted by a network of seniors based in Pöytyä in the country’s southwest, where the label is based, using organic hand-dyed yarn from the brand’s own herd of sheep. A photo of each hat’s maker is featured on the box, with their signature on the label.
Retail prices: $67 to $145