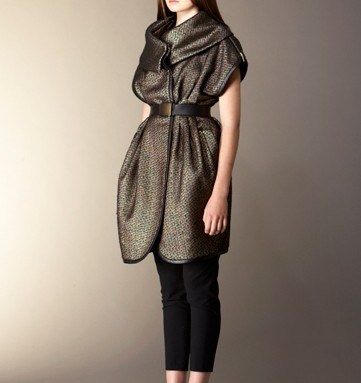 It’s been two-and-a-half years since Cynthia Steffe left the namesake brand she founded in 1989, and the label’s parent company, Bernard Chaus Inc., appears to be finally hitting its groove with the collection.

Since Steffe and her husband and brand president, Richard Roberts, departed in December 2006, the brand has been through an identity crisis. First the company brought in Naum designer Waleed Khairzada as a design consultant for two seasons before tapping Shaun Kearney, who brought experience from within the company as vice president of Kenneth Cole New York’s (licensed) cream label and creative director for all divisions at Chaus since 2003. Now that Kearney has officially been on board as executive vice president of design and creative director at Cynthia Steffe for a full year, the company is eager to disclose some of the changes being made — including global expansion plans and new product categories.

“The contemporary market as a whole is much more sophisticated and edgy than it once was,” said Kearney during a walk-through of the collection at the 550 Seventh Avenue showroom. “For this collection we worked to play with the hard and soft elements.”

In addition, Kearney has changed the look of the label. It used to be orange with the name Cynthia Cynthia Steffe printed on it in white. Today, the label is black with the Cynthia Steffe logo printed in metallic gold, which Kearney said matches the sophistication of the clothes.

Besides the creative changes, the company has worked to make production more efficient. For starters, all samples are made in a small sample room inside the brand’s offices.

“A great deal of the production was handled overseas but in order for us to create a foundation, we really needed some of it to be done here,” Kearney said.

“It’s been a great investment to have our samples made right here and, because of this, we are able to get product shipped to the stores very quickly,” said Annette Mathiew, Steffe’s president of sales and marketing.

The brand is also making some moves on a global scale. For the first time, Steffe will be sold overseas — in Harrods and Harvey Nichols this fall. According to Mathiew, the company is looking at expanding throughout Europe, Central America and Asia, and is in talks to launch licensed swimwear and footwear, with other accessories to follow.

In addition, Kearney said they are in early conversations to launch an e-commerce site as well as freestanding stores.

Today, the line is sold in better department and specialty stores including Lord & Taylor, Bloomingdale’s and Neiman Marcus. In order to satisfy retailers looking for items at a lower price point in the contemporary category, Mathiew said Steffe has adjusted its prices, lowering them by about 10 percent from last year. Now, the line wholesales from $34 for a tank top to $269 for a leather jacket. Back in 2006, the line was wholesaling between $69 to $289.

Launched in 1989, Cynthia Steffe became a division of LF Brands — then Leslie Fay Cos. — in 2000. Extricating itself from LF Brands, which had gone out of business just weeks before, Cynthia Steffe had wholesale volume approaching $20 million in 2004. Roberts said at the time they spoke to companies throughout the world before selecting Chaus. Chaus bought the brand in January 2004 from LF Brands for an estimated $5 million. In 2006, Chaus planned to grow the Cynthia Steffe trademarks from what industry sources estimated was a $24 million wholesale business, without changing the channel of distribution or price. Now in a recession, company executives said they plan to eventually reach that $24 million goal, but they have taken a step back and look to increase the label to somewhere between $12 million and $15 million over the next year, Mathiew said.