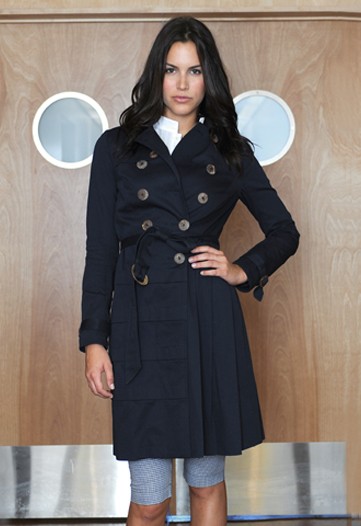 LOS ANGELES — For a couple of laid-back California dudes, actor David Arquette and singer Ben Harper are striving to impose some propriety on women’s wardrobes.

In their new contemporary clothing line, Propr, Arquette and Harper are offering cuffed trousers cut out of cool chambray, vests accented with bow snaps, minidresses screen-printed with clusters of chubby birds and ruched boyshorts for bikini sets. The palette is intended to be timeless in navy, red, white and yellow.

“There’s a classiness and a sort of refinement to the clothing,” Arquette said, noting that the label’s name was derived from an old French word meaning “proper.” The garments have “a quality that’s traditional; a little bit vintage and very functional.”

With retail prices ranging from $90 for a polo shirt to $495 for a pleated trenchcoat, Propr is an alternative to other preppy sportswear brands such as Trovata, Rag & Bone and Boy by Band of Outsiders. Propr’s creative director is David Bedwell, who held the same title at Original Penguin.

While Bedwell steers the company through the intricacies of manufacturing and retailing, the designs reflect his taste as well as the styles of Arquette and Harper. On a sunny afternoon, Harper arrived to review the line in baby blue Nikes and a white T-shirt that barely concealed his arms inked with tattoos. In contrast, Bedwell knotted a mustard-colored scarf around his neck to enhance a vintage blazer, and Arquette paired scuffed brown oxfords with a polkadot print shirt.

Propr is run out of a building designed by Richard Neutra that houses the production company that Arquette runs with his wife, actress Courteney Cox Arquette, in Los Angeles. Cheeky prints by artists Banksy and Shepard Fairey share space with an aged trunk from Louis Vuitton. Propped against a wall, a giant cutout of the label’s logo — owl triplets — further symbolizes the partners’ approach to designing.

Starting a fashion label had been conversation fodder among Arquette, Harper and Bedwell for a couple of years, But the trio didn’t embark on the project until January, when Bedwell left Original Penguin. Although Arquette is making his fashion debut, Harper’s first foray as a designer came in the mid-Nineties. He lost $10,000 on a line of Western shirts that he didn’t even name. “What I learned from the process — fabrics, stitching, what you choose for the line — is applicable” to Propr, said Harper, who is married to actress Laura Dern.

The other members of the five-person team at Propr are Christian Arkins, who started his own women’s label called William & Augusta after serving as design director at Original Penguin, and Paul Marlow, who designs a men’s line called Loden Dager after stints at Original Penguin and Marc Jacobs.

With the company’s collective experience in accessible sportswear and the celebrity cachet of Arquette and Harper, retailers such as Kitson and Scoop have bought Propr’s classic pieces and swingy dresses. Declining to disclose sales projections, Bedwell said the goal is to limit distribution to 45 doors in the first season so the company can fulfill production orders. Opting to manufacture in New York and Los Angeles, Propr uses mostly eco-friendly fabrics such as hemp or organic cotton.

“We are passionate about environmental issues,” Harper said. “We want to make [the clothes] in America.”

For the 43 pieces in the women’s inaugural collection, the partners channeled muses including Audrey Hepburn and Twiggy. Harper and Arquette also turned to their wives for inspiration. Arquette noted that a black dress hanging in Cox Arquette’s closet formed the template for a chambray frock accentuated with skinny bows under the scoopneck. “You can also thank Laura Dern for a knee-length short in gingham,” Bedwell said.

Based on the turnout for Propr’s debut runway show Oct. 15 at the Arquettes’ modern manse in Beverly Hills, half of Hollywood could play a role in Propr’s potential success. Among the faces in the crowd were Jennifer Aniston, Cindy Crawford, Heidi Klum, Jamie Lee Curtis, Lance Armstrong, Vincent Gallo, Lukas Haas and Patricia and Rosanna Arquette.