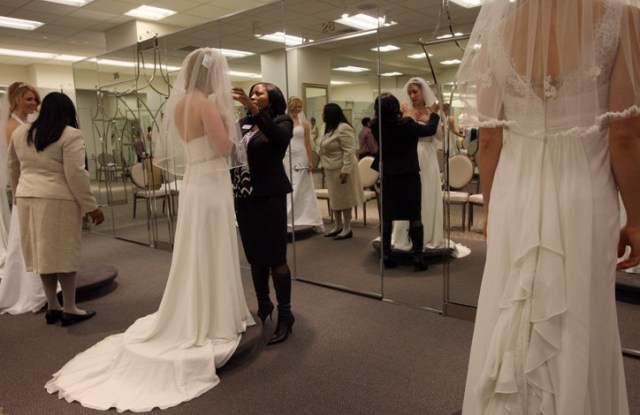 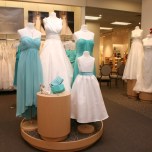 Opening a big-box store in this economic climate, never mind Manhattan, would make many executives pause, but David’s Bridal president and chief executive officer Robert Huth was stalwart about his decision to do so at Thursday’s opening of the company’s 303rd store.

After a mammoth wedding veil and tiara were lowered on the building’s facade to mark its unveiling, Huth said he expects the 12,800-square-foot space, its first in Manhattan, to be one of the chain’s top performers. The store is located at 751 Sixth Avenue and West 25th Street. Huth declined to comment on projected volume, but noted the company outfits 500,000 brides annually.

Opening stores in cities is a major initiative for the largely mall-based David’s Bridal, which plans to open a unit in Honolulu in August and is eyeing other locales such as Boston. “There really is a dearth of products in cities for brides,” Huth said.

While the company’s Priscilla of Boston business has performed well, David’s Bridal’s sales have flittered, mainly due to a slowdown in accessories sales. The retailer’s wedding gown and bridesmaid dress business has held its own, Huth said. With retail prices ranging from $300 to $1,200, David’s Bridal is positioned for brides on a budget. In addition to its private label David’s Bridal and David’s Bridal Woman Collections, the retailer offers Oleg Cassini, Galina Signature and Galina Collections as its designer collections.

In recent months, shoppers have been buying closer to need, presumably waiting until they get the cash they need to buy their selections instead of charging their purchases, Huth said. That tendency, a prevalent shopping pattern in the Seventies recession, is only expected to increase going forward, he said.