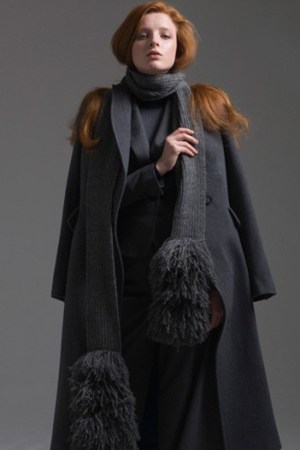 New York Fashion Week is fast approaching and it’s all about the new and the next. Here are four seasoned designers launching new ventures for fall.

Tribune Standard
By definition, tribune means “a platform which speaks to many,” which is just what designer Tawfik Mounayer aims to do with his new company. Not one to be put off by merchant-speak, he said he hopes to do that by “leveraging his commercial background and taste level.” During an interview Monday, Mounayer said, “An [initial markup] does not scare me, but I know a lot about couture, too.”

In 2008, he resigned as vice president of design at Liz Claiborne, where he helped relaunch the Isaac Mizrahi label. After traveling to Australia and Europe, he returned to Manhattan and consulted on the redesign of Loft. Now he is out on his own designing a better contemporary label from 551 West 21st Street. The collection features fluid Seventies styles, all-around sportswear and tailored pieces for fall. Geared for specialty stores, the line’s wholesale prices start at $80 for a cut-and-sewn scoopneck jersey ballet top and go up to $600 for a wool coat.

“I like to say if Claire McCardell and Yves Saint Laurent had had a son, it would be me. More concrete references soon will be found on the brand’s Web site, tribunestandard.com, where shoppers will be able to learn where specific pieces are made and why they are priced what they are.

Byron Lars Beauty Mark
Byron Lars, one of the designer wunderkinder of the early Nineties, will be back on the show scene at Lincoln Center for the first time in more than a decade. He no doubt will see many familiar faces at the Byron Lars Beauty Mark presentation Feb. 11 at the Stanley H. Kaplan penthouse on West 65th Street.

“Kim [Hastreiter of Paper magazine] was looking at the collection and she said, ‘You have to do something. No one knows you’re here,’” Lars said.

For next week’s return, 20 models have been lined up for the three-hour forest-inspired, multimedia event.

What many might not know is Lars has been quietly building the Byron Lars Beauty Mark sportswear label for 10 years and it is now sold in 200 specialty stores. Building on that distribution base, he is launching a secondary, cotton-based label, called BLEACH (Byron Lars Evolution and Cotton Harvest). At this point, prices aren’t that different from the Byron Lars Beauty Mark collection, but the designer hopes that will not always be the case. “Of course, as soon as I decided to launch an all-cotton collection, cotton prices went through the roof and labor prices in China shot up,” Lars said. “But I hope to get the prices down [later].” Byron Lars Beauty Mark is now priced at $88 to $250, while BLEACH remains at $78 to $198.

Dawn Levy
Having designed licensed Laundry outerwear for The Levy Group for seven years, Dawn Levy did not have to think twice about designing a signature collection. What she came up with is a 20-piece line, with belted lightweight, fur-lined styles being among the key pieces. No one needed to remind the brand’s namesake about the plethora of down jackets that are already being sold. “Our market is saturated with down coats for women, but most of them are basic and not fitted,” she said.

Geared for high-end stores, with 15 being the initial targeted account base, Dawn Levy outerwear wholesales from $250 to $600. Levy, who continues to design Laundry outerwear as well as private label, initially learned the ropes of the business through osmosis. For the past 16 years, she has traveled extensively with her husband Donald, president of The Levy Group Inc., checking out factories and fabric mills.

Seven years ago, Donald Levy asked his wife to size up the debut collection of licensed Laundry coats, which at that time were designed by another designer he had hired. “I told him, ‘I think it’s pretty horrible. It’s not going to work,’” she said. “I told him it needed to be more young and modern. That customers needed to have a reason to shop in the coat department. And he told me, ‘Then you do it. I’ll teach you everything you need to know.’”

Laundry outerwear is now a $20 million wholesale business, and Dawn Levy said she aims to sell 10,000 units of her signature label the first year out. Her collection is the first one to be owned by the 65-year-old, $200 million Levy Group.

Jane Post
For decades, Jane Lipman Post was associated with the rainwear label Drizzle that her late husband, Jack Lipman, founded in 1969 and sold to Fairbrooke in 1995. But in spring 2006, Saks Fifth Avenue persuaded Post to design a few coats, and in 2008, she quietly introduced her own label of short capes, reversible cashmere coats, a camouflage safari jacket and duffles. With Neiman Marcus, Bloomingdale’s and Bergdorf Goodman being a few of the majors carrying the collection, she is now zeroing in on independent specialty stores for further growth. “I try to make everyone’s coats different. It might be the same body, but with a different lining or fabric,” she said. “It’s not design by committee, which happens in this industry.

Wholesaling between $180 and $350, Jane Post is sold in 10 specialty stores and the brand plans to sell to hundreds of independents within the next two to three years, according to president Jeremy Joory.

Through a partnership with his family’s Hong Kong-based company Court International, Joory and his brother, Simon, work for Old Toledo and are helping to build its private label business in North America. Old Toledo is a financial investor in Jane Post and both parties are negotiating a potential joint ownership. Fabrics for Jane Post coats are sourced from Italy, France and Japan.

This year’s sales should hit $3 million compared with last year’s tally of $2.5 million.