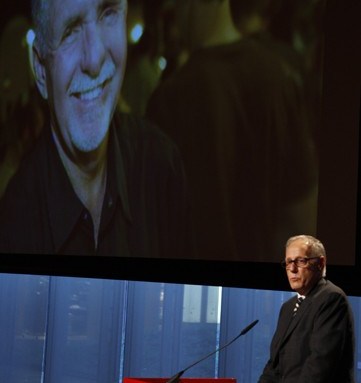 To the strains of the Sarah Brightman song “Time to Say Goodbye,” a stream of friends, family and apparel industry colleagues of the late Dick Baker filed into The New York Times’ building on Thursday evening to pay tribute to the former Ocean Pacific president and chief executive officer, who died on April 14 after battling colon cancer.

“If the measure of a man is the impact he had on others, than Dick Baker was a true giant,” said Paul Rosengard, group president of premium brands at Perry Ellis International. “Dick always believed in his friends. He pushed and challenged and inspired us to think big. His own ability to reinvent himself was legendary.”

Baker, who was 62, began his career as a buyer at Bullocks, went on to become president of Marithé + François Girbaud, and then ceo of Izod sportswear. In 1986, he was tapped as president of Esprit women’s and then became president of Tommy Hilfiger women’s. In 1997, Baker switched gears and was named ceo of Op, which he rejuvenated, in the process becoming closely associated with the surf industry. Op was acquired by Warnaco Group Inc. in 2004, and Baker stayed on as president of the brand through 2007.

Baker was president of the Surf Industry Manufacturers Association for nine years and was most recently chairman emeritus of the organization.

Dylan and Dustin Obert, the young founders of the surf brand Ambsn Clothing, recalled meeting Baker at the ASR trade show two years ago. He became a mentor to the two entrepreneurs, and the duo expressed their appreciation for his selflessness, even as he faced difficult chemotherapy treatments. “We were in disbelief, because of who he was and that he had blown off the Macy’s buyer to talk to us,” recalled Dustin Obert of their first encounter.

Michael Setola, president of Greg Norman Collection, related a fishing trip to Panama with Baker and their respective sons. When one of the boys caught a large sailfish that put up a stiff fight, Baker blurted out, “That fish fought harder than Frank Tworecke negotiating markdown money.” (Tworecke, who was in the audience, was a former president and chief operating officer of Bon-Ton Stores Inc. and is now group president of sportswear at Warnaco.)

“My dad was my hero and best friend. He was always known as a cool dad among my friends,” noted Ryan.

The New York service followed a May 31 ceremony at Doheny State Beach in California, that drew a crowd including Bob McKnight, ceo of Quiksilver; Bob Hurley, founder of Hurley International, and Paul Naude, ceo of Billabong. As part of that event, hundreds of surfers paddled out into the ocean and formed a circle, in a traditional Hawaiian tribute to Baker.