Jones Apparel Group Inc. trotted out Richard Dickson to the St. Regis Hotel for a “meet and greet” after close to 100 days on the job. 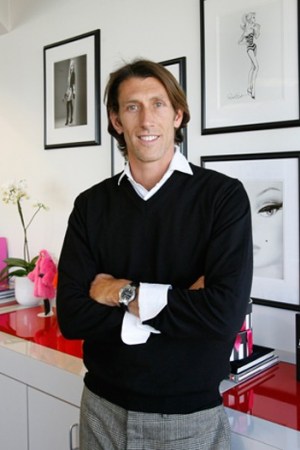 NEW YORK — Jones Apparel Group Inc. trotted out Richard Dickson, president and chief executive officer of branded business, to the St. Regis Hotel here Wednesday for a “meet and greet” after close to 100 days on the job.

Dickson was joined by Wesley R. Card, ceo of Jones Apparel Group, and the two men discussed topics such as the recent Stuart Weitzman acquisition, overseas growth opportunities, the success of the Shoe Woo footwear stores and a new advertising campaign that Jones will introduce in the fall for Jones New York.

Card said Jones’ core “is stable” and the firm now can look for white spaces in its portfolio.

“We don’t have a lot in contemporary and the higher end,” said Card. He and Dickson noted that the Weitzman acquisition gives the company a lot of opportunity to grow, as well as a more important relationship with stores such as Saks Fifth Avenue, Neiman Marcus and Nordstrom. The company also is pleased with the Jessica Simpson jeanswear collection for contemporary departments and business prospects for Rachel Roy and Robert Rodriguez.

While Jones is clearly in growth mode, Card felt this was a good time to add another layer of management, bringing in Dickson to ignite the brands and pursue expansion opportunities. With Dickson’s leadership ability, and the ceo’s reporting to him, Card said the company can take advantage of the synergies among the brands, capabilities across all categories and new business propositions.

For instance, the Stuart Weitzman brand could eventually be expanded into ready-to-wear categories such as eveningwear and fine suitings, and Robert Rodriguez can roll out into many other classifications, including footwear. Dickson said Jones has been able to provide Rodriguez with a full marketing department, a sourcing office and other back-end areas to help him expand his apparel business.

While Card said he has no plans to leave the company and intends to stay for many years to come, he added: “The best succession plan is talent management and bringing people in way before we need to make a transition.”

Dickson said he’d like to freshen up the Jones New York brand “and make it crisper, more emotional and more meaningful” to customers. He believes the Jones brand could have a stronger point of view through its advertising, marketing and in-store presentations. He plans to communicate its new advertising and marketing message to consumers in the fall.