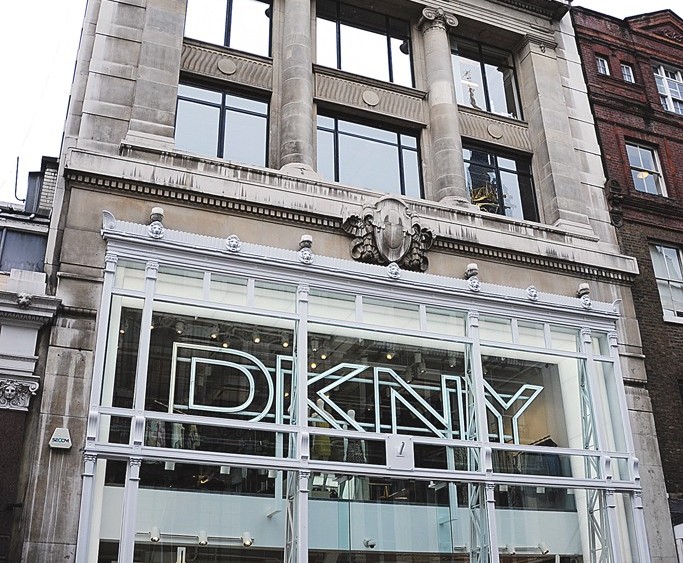 DKNY has freshened up its image on London’s Old Bond Street with a newly refurbished 11,500-square-foot flagship that officially opens today and is warmer, brighter and more lifestyle driven. The new look reflects the aggressive new strategy at DKNY, stretching from international expansion to product improvements.

The changes at the London store are major: The cafe at the front of the store is gone — replaced by a new accessories area with big, soft leather furniture and a ponyskin rug — while the two central escalators have been ripped out of the atrium in order to let in natural light.

“Instead of being a bold, brash New Yorker coming to London, we wanted to merge the two cities, to juxtapose New York elements with an historic London building,” said Dominic Kozerski, who has long collaborated with Donna Karan on design and architectural projects, and is a partner at Bonetti Kozerski Studio in New York. The original DKNY store in London, designed by Peter Marino, made a major statement when it opened in 1994. The store had an electric white interior, an atrium penetrating four floors, a clear glass roof, a cafe at the entrance and backlit projections of NYC yellow taxicabs in the rear.

With the aim of drawing more light into the store, and showcasing the other buildings that surround it, Kozerski ripped out the walls at the back to reveal dramatic two-story windows that look onto Browns Hotel on Albemarle Street. Similar-size windows at the front look onto Bond Street and showcase a big, white DKNY that looks more like an art installation than retail signage.

Many of the walls have been stripped back to expose the original brickwork and iron girding, and the space — while open and loftlike — has been shaped into a series of smaller spaces for a more retail-friendly and homey feel. Kozerski said much of the merchandise has been put into the center of the sales floor so that customers don’t feel like they are shopping on the perimeters, as in the past. Here and there, screens beaming the latest DKNY runway show have been inset into walls. Other screens are more interactive and allow customers to watch instructional videos, see how DKNY jeans fit on models and connect with the designer’s New York offices on Twitter.

The ground floor is made from gray stone slabs, while the central atrium has been hung with a 30-by-30-foot black-and-white backlit photo of Manhattan, leaving customers in no doubt of where Karan’s heart lies.

The retail space spans three floors. Women’s wear is on the first two levels and men’s wear and DKNY Jeans are on the top. The furniture throughout is a mixture of the new — such as industrial-looking architects’ drawer sets that double as display counters, and rustic, recycled antique tables stacked with men’s knits and shirts.

“We’ve been planning this store for more than a year now,” said Mark Weber, chairman and chief executive officer of Donna Karan International and ceo of LVMH Moët Hennessy Louis Vuitton U.S. The company demolished the store’s previous interior over a six-week period and rebuilt the new directly owned unit in six weeks, so it wasn’t closed for more than three months. The strategy was to have it ready in time for the Summer Olympics in London later this month.

“I don’t consider that we’re renovating the London store. We’re rebuilding the whole flagship based on the newest, current view of New York City,” said Weber. When the store was originally built, it represented the energy of New York City. “Now we’re modernizing that. Our job is bringing New York wherever we go,” said Weber.

DKNY has been busy transporting the New York City lifestyle to countries around the globe, as well as sharpening its wholesale operation. According to market sources, DKNY’s global retail sales exceed $3 billion, including licensed businesses. At present, DKNY has 211 freestanding stores and concessions internationally. In a major move on the home front, DKI took back its DKNY Jeans license from Liz Claiborne Inc. in January, and has been making substantial improvements in that business. “The jeans business needs to be reenergized,” said Weber. Now that they don’t have to contend with a women’s license or a men’s license, they are free to embrace jeanswear and sportswear in DKNY Jeans, he explained. “We can dress her up or dress her down. That’s how we’re approaching the market,” he said.

The DKNY Jeans customer is younger (than DKNY), and price doesn’t play the same role in jeans as it does in other products, he said. “People are willing to pay more for the right style, the right wash and the right finish,” he said. For resort, jeans prices are about 20 percent higher, and may be even more so for spring. “The product has to look like it’s worth it,” said Weber. DKNY Jeans offers a full range of prints and color. “The prior Liz team would experiment with color, and we’ve just blown it out. They would do two new colors a season, and we’re doing 10. We believe the turnaround will come much sooner than we anticipated,” said Weber. The business improved for fall, and for resort, the company is seeing more dramatic improvement. “Spring will be our full-blown effort,” he said.

Weber believes every brand has an entry point, and jeans represent that for DKNY. “It’s appealing to a broad base of customers, particularly young customers,” he said. DKNY Jeans operates an international and a U.S. business, and “both are being embraced.” The international jeans business is based in Hong Kong and is a licensing agreement with Club 21. It is positioned as a premium denim line and is higher-priced than DKNY Jeans in the U.S.

Another growth opportunity for the brand is PureDKNY, which is the casual, cotton-and-silk-based clothing line. The company has been building separate PureDKNY shops, with the first Pure test store opening in Century City, Los Angeles. The store, which is a temporary unit for one year, is outperforming a lot of DKNY’s other shops. The company is looking for locations in other markets.

Overall, DKI has been expanding its DKNY stores at a fast clip. The company added 53 stores last year and plans 34 new stores this year. The stores are either fully owned or operate under joint venture partnerships. “We develop the store with our architect, they build it to our specifications, we sell them the product and there’s a close working relationship. It gives the partner the opportunity to make the kind of returns they need to be successful. At the same time, we get to look exactly like we look all over the world. We have five big partners between the Far East and the Middle East, including Russia,” said Weber.

Russia represents the most recent initiative in the emerging markets. “It was important to plant our flag there,” added Paul Kotrba, executive vice president of global strategy and international sales at DKNY. Since October, four DKNY boutiques have opened in Moscow: at GUM, Four Seasons, Metropolis and Mega Belaya Dacha malls. In October, a fifth store will open in Vernadskogo, which will be accessories-only. The firm also opened DKNY units on Nevsky Prospect in St. Petersburg, at the Europa Mall in Yekaterinburg and at Astor Plaza in Rostov-on-Don. In October, a second store will open in Rostov-on-Don at Horizont Mall for accessories.

DKNY has also found the Middle East to be a lucrative market. The dresses are often designed in longer lengths to cater to local tastes. “They like 38-inch dresses. It’s a very global customer base since they travel quite a bit. The Middle East is becoming a destination for international tourists,” said Kotrba. He said with partner Al-Yasra, the brand has 14 stores, and two are planned for next year. The company has also had a presence in India since 2009 with freestanding stores.

Asia is one region that’s aggressively being cultivated. There are 170 DKNY stores across Asia alone. “China and Hong Kong had been running double-digit comps through May. June slowed down to single digits….There is a concern. As for Europe, there is much uncertainty,” said Kotrba.

There are 40 women’s and four men’s DKNY stores in China. The plan is to open nine more stores in China this year. “The strategy has been pretty consistent, since the retail rollout launched in 2006 with Imaginex,” said Kotrba. DKNY launched in Shanghai and Beijing, and then rolled out to second-tier cities. There are now five DKNY stores in Shanghai and five in Beijing. The balance is in the country’s other key cities. In the first quarter of 2013, DKI will unveil a flagship in the Kerry Center in Shanghai that will house DKNY and Donna Karan. “It brings the world of Donna Karan together. It will have separate entrances with common areas,” said Weber. “We wanted to create a very powerful Donna Karan dynamic and we think putting the two together can be extraordinary.”

Accessories-only shops are sprouting up around the world. At present, there are 37 accessories-only locations in Europe, the Middle East and the Far East. The stores carry footwear, handbags, small leather goods, fragrances and “easy pick-up” items. “Comp growth is exceeding expectations,” said Kotrba.

Recently, the company unveiled a duty-free airport shop in Terminal 7, the new international terminal, in the Hartsfield-Jackson Atlanta International Airport. Kotrba said it is opening Dubai duty-free and is considering a duty-free shop at Qatar airport.

As it opens stores globally, DKNY continues to build its wholesale business in the U.S. with such key accounts as Bloomingdale’s, Saks Fifth Avenue and Neiman Marcus. “Macy’s is an important customer and will become very important with DKNY Jeans,” said Weber.

“The company’s doing well. The fact that [DKNY] has been around for 23 years and is still growing speaks well of the sustainability of this brand,” said Weber. “To be so vibrant after that amount of time is an exciting place to be. The biggest challenge facing us is mining the opportunities. What we’ve tried to be is extraordinarily disciplined. We’re not adding licensed categories that we think are superfluous. We’re not opening stores we don’t think will be successful,” said Weber.

Eventually, DKI plans to renovate the Madison Avenue DKNY flagship. E-commerce is only available in the U.S., and new countries will be coming on board shortly, he said. Social media continues to play a critical role in DKNY’s growth. Weber said its team has done an “amazing job” staying out front. It has its own app, Facebook page and DKNY PR Girl on Twitter and Tumblr (blog). While it’s hard to determine if social media actually builds sales, Weber is a strong believer.