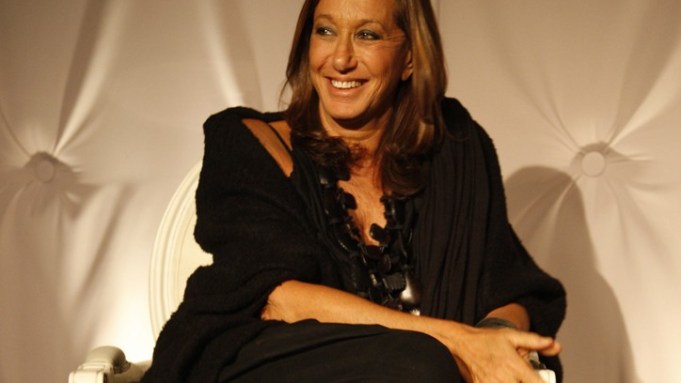 Donna Karan has never been the kind to shy away from a cause, whether it’s pediatric AIDS, ovarian cancer or the mind-body connection. And lest anyone think Super Saturday and the pursuit of Zen in general were only pet projects, Karan delivered an impassioned reminder of a campaign that predates both of the former: seasonality. Not only the idea of dressing for the calendar, but the now-ancient practice of shopping for clothes during the season for which they’re intended.

Karan’s been preaching the gospel of in-season deliveries for more than a decade, and has often been dismissed as fashion’s gadfly. Now, with the industry in a state of flux and stores obsessed with lean inventories and markdown management, her argument is finally getting some traction.

“We’re all in trouble,” said Karan. “We have to collaborate to create the change [we need] to get out of these waters that we’ve created for ourselves. Nobody else did this. We did this.”

Karan presented her case as not only a designer but as a customer who’s experienced the problem firsthand. “It really daunts me, in the middle of Capri or in the Hamptons, all of a sudden the shearling coats and the fur boots [come in] and I’m sweating to death,” said Karan. “And I say, ‘Please, can I have something for summer?’ Well, that [merchandise] was in November.…Maybe if the climate would change, we’d be on schedule.”

The active calendar has fall merchandise delivered in July and August and spring styles in February, catering to an industry obsessed with speed and a fashion client who’s been trained to expect the key trends early. Meanwhile, the rest of the buying population has been trained to wait for sales, just about the only time stock coincides with the weather outside. Therein lies the problem, said Karan. “We’re not talking to the consumer, we’re talking to ourselves. When it’s cold out, let’s warm the customer. When it’s hot out, let’s be able to the cool the customer.”

“This isn’t nuclear science,” said Karan, before putting a potential solution on the table. “Don’t deliver fall clothes until back-to-school — do you remember that old logo, back-to-school? — [in] September, when the leaves start to change. Now the leaves are changing but our seasons are changing because we’re already shipping resort.”

But effecting such change is a massive undertaking that would require a supply chain overhaul — from designer houses to manufacturers to stores. Karan’s response: So what?

“If the system were working, we’d all be here celebrating and probably not having this conversation,” she said. “If there’s a problem, there’s a solution, and right now we have a very defined problem.” One she likened to the national health care debate, hinting that perhaps the CFDA could be doing more to mobilize the industry toward consensus and action rather than conversation.

If the health care parallel is a stretch, the idea of fashion politics isn’t. Karan urged the retail heavyweights in the room to put their agendas aside. “This isn’t about Bergdorf’s over here, Saks Fifth Avenue’s here and Neiman’s — who’s going on sale first, who’s going on sale second,” she said. “We collaborate and create this change. The stores, the manufacturers.…It’s all of us. It’s a true metabolic change.”

Speaking of change, the fashion landscape has evolved considerably since Karan launched her label in 1984, with one of the biggest differences, as far as Karan is concerned, being the show schedule. “I think my first show was in May,” said Karan. “That was fall, if I could recall.”

Blame some of the latest shifting around on Helmut Lang, who, in April 1998, unceremoniously moved his New York show (at the time New York followed Paris) to the top of the international schedule, thus igniting an industrywide reshuffle. “I have to celebrate Helmut,” said Karan. “At first I wanted to strangle him, but I think that was ingenious.” While Lang’s move achieved its intended result of taking New York out of Milan and Paris’ line of influence, it posed another problem, in Karan’s view: Now the shows are too early, the information and imagery too immediately available — online and otherwise — for public consumption, which, she said, ultimately sabotages sales. “We communicate too much,” Karan explained. “All this blitz, these wild shows. Millions of dollars [are spent] talking to the consumer about next season, but we want her to buy this season. She doesn’t know what’s happening. We’ve got to pump down the volume on the future and lift up the volume on the present.”

Karan proposed fashion take a cue from another industry specializing in glitz and glamour. “I look at the movie industry as the perfect, pure example,” said the designer. “When a movie’s coming out, there’s hype at that moment…when it’s hitting the stores. People get excited and they go watch the movie. Now, here, on the other hand, we hype a season and the consumer says, ‘Well, I go into the store, but it’s not there.’”

Still, marketing and media are machines as powerful as they are essential in today’s digital, social-media-obsessed world. No argument there. But Karan would like to see some control, as in show the industry first, the consumer second. “We don’t need everybody to know what’s going on in this business.” Key to her point is resort, the number-one season for many designers, Karan included, despite the fact it goes on with little fanfare. “No big fashion shows, no big consumer hype, no anything,” said Karan. “We talk person to person…designer to retailer.…It’s a great season, longer selling periods. And we’re not pushing this in the consumer’s face.”

On the flip side is celebrity dressing. “It drives me crazy, the red-carpet collection that we have to do,” said Karan. “That’s yet another collection because — god forbid — somebody should wear on the red-carpet something that was shown down our runway [and was put] online. So we have to design yet another collection that goes red carpet that nobody gets to see. It’s like, wait a second, where’s the vacation here? Designers need a little creative space.”

Karan has valid points — who wouldn’t like a little more downtime? — but reality suggests the Internet and celebrity-driven ecosystem aren’t going away. Fighting it might not be the best use of energy. But then, Karan has a mantra: “In yoga they say, ‘Breathe, pause.’ I think we’ve got to pause.”