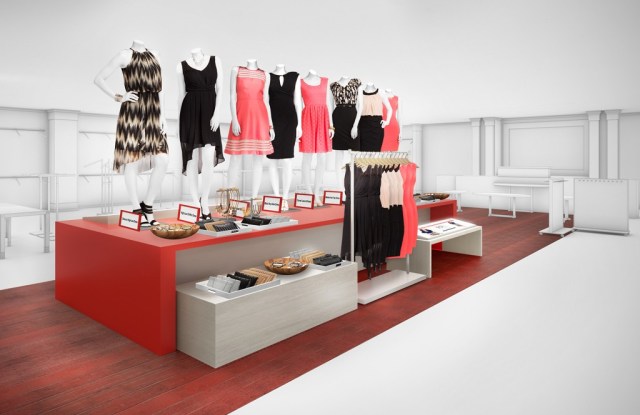 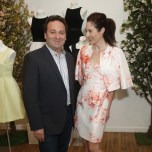 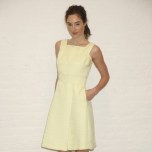 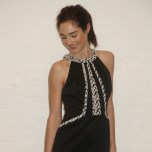 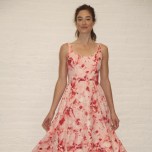 Dress Barn is dressing up its selling floors and corralling designers into the mix.

This story first appeared in the January 27, 2015 issue of WWD. Subscribe Today.

“It all starts with dresses. It’s our highest market share business,” said Jeffrey Gerstel, president of Dress Barn, in an exclusive interview about the retailer’s upcoming Dressbar multichannel concept. Dressbar launches March 4 with shops-in-shop, dressbar.com, a freestanding pop-up shop at 102 Fifth Avenue in Manhattan’s Flatiron neighborhood, and an array of dresses created by Carmen Marc Valvo, Heidi Weisel and Michael Smaldone from Adrianna Papell, marking the chain’s first designer collaborations. “We are taking runway looks and translating them to value customers,” Gerstel said.

Each designer is creating six to 10 exclusive dresses, priced $42 to $70, under the labels Luxe by Carmen Marc Valvo, Mixt by Heidi Weisel, and Lovely by Adrianna Papell. Valvo is known for evening gowns, florals and pleating; Weisel is known for her knits, cashmere and mixing fabrics in unexpected ways, and Smaldone creates dresses that transition from one occasion to the next, day into evening.

Among the 25 designers considered, “We decided on those we felt understood the body of a woman in her 40s, someone who had a personality that customers could relate to and would be able to get out and connect with customers,” Gerstel said. “We wanted a connection. They will make store appearances and appear on the Web site, telling their stories to the customers.” With its less than 2 percent share of the dress market, “There’s a tremendous amount of market share we can win,” Gerstel said.

In another collaboration, Tuleste is creating True by Tuleste jewelry to complement the Dressbar dresses. “We do have plans to welcome other designers into this concept as long as it stays relevant,” said Lori Wagner, Dress Barn’s chief marketing officer and executive vice president of e-commerce.

Though cutting-edge fashion is not its calling card, the 830-unit Dress Barn is seeking to raise the profile and productivity of the chain’s most important category and cast a stylish glow over the entire business. Dress Barn was founded in 1962 by Roslyn Jaffe, in a converted barn in Stamford, Conn. It’s a business that doesn’t often get credit for catering to middle-aged and older middle-income working women and housewives of all body types with on-trend casual, career and special-occasion apparel and prices that are attractive to the consumer. The typical Dress Barn customer is in her 40s and wears a size 12. It’s lived with an image undercut by the brand name which doesn’t evoke the most flattering impression. At one time, executives considered changing the name to something more fashionable but determined it’s such a familiar, longstanding nameplate that a switch could confuse shoppers.

The chain hasn’t had the kind of convulsions seen at other big specialty chains like Wet Seal, Gap, Talbots, New York & Co., American Apparel and Abercrombie & Fitch and has had a conservative profile, with fashion and discounting. The company does run two major clearances yearly and rewards customers with discount coupons, though unlike most department and specialty stores, “We are really not in the promotional game taking 40 percent off everyday,” Wagner said. “Everyday value is our message as opposed to price promotions.”

Initially, Dressbar will be in 25 Dress Barn stores, with a rollout to hundreds of locations over time anticipated. The Dressbar fixturing, mannequins and signs will be distinctive from the rest of the store, and iPads will be displayed to help shoppers and associates find and learn about products. All Dress Barn dresses — under the DB or designer labels — will be in the Dressbar, with the exception of the new dbRSVP in-house label for evening gowns and cocktail dresses, introduced last fall for online selling and the pop-up shop, which is the sole freestanding Dressbar and will be open until May 31. No other freestanding Dressbars are planned.

Branding expert and store designer Robin Kramer of the Kramer Design Group worked on the Dressbar format, which will occupy about 25 percent of the space in Dress Barn stores, which average 7,500 square feet. Kramer is also working on re-branding and modernizing the entire store, details of which will be revealed later in the year. “The idea of Dressbar is really to maximize the core product,” Kramer told WWD. “It’s like a bar. You sit at it, look online, the mannequins are right there and you get service from the salesperson.”

Dressbar.com will have e-commerce, editorial content and social interaction, and will be advertised in Marie Claire, InStyle and O, The Oprah Magazine, signaling Dress Barn’s return to advertising for the first time since 2011. “Dressbar will be that central area in the store where women will gather,” Wagner said. “There’s technology at the bar, where you will be able to go online and get robust content about the designers, dress trends, fashion trends, lots of fashion tips and videos. We plan on being the number-one destination for dresses. In our value sector, there are very few [retailers] giving this level of design at our price points. We feel it’s a real differentiator.”

Beyond the first wave of Dressbars, “We want to continue to roll out Dressbars where it makes the most sense,” Wagner said. “Any new store will be built with one. Retrofitting old stores is a process.” At all stores, including those not retrofitted right away, dresses are being moved to the front where there will be some degree of Dressbar designation. On dressbar.com, women will be able to search for dresses by occasion, like for a picnic, job interview or a date, or by mood like “feeling flirty” or “feeling caffeinated.”

Executives said Dressbar is as much about selling dresses as it is for creating a connection with customers. The site will feature chats, Q&As with designers, stylist Cate Sheehy and recollections from customers about their favorite dresses and what they wore on special occasions. “A woman engages in dresses very differently from how she engages in other categories,” Wagner said. “A dress is tied back to a very emotional occasion, like that perfect first date.”