Dress sales are expected to get a lift from the looks that Kate and Pippa Middleton wore to Friday's royal wedding festivities.

By Rosemary Feitelberg on May 3, 2011
View Slideshow 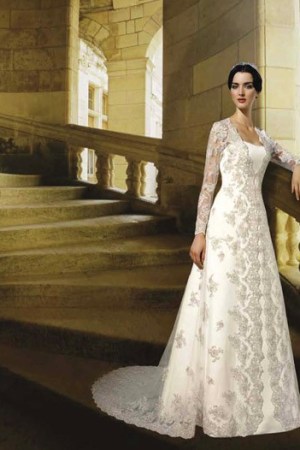 The news cycle has shifted to far more serious subjects, but bridal types are still rejoicing and in many cases knocking off the dresses that Kate and Pippa Middleton wore to Friday’s royal wedding festivities.

The fact that the Duchess of Cambridge wore two dresses — one Alexander McQueen for the ceremony and another from the house for the black-tie dinner Friday evening — should only further the two-dress trend, executives said. Brides-to-be should also be more inclined to buy into key elements of her wedding gown — long sleeves, lace and V-necklines. And Pippa Middleton’s head-turning choices — an ivory drape-necked McQueen for the daytime and an emerald green Temperley London gown for the evening — are even more commercially viable, bridal representatives said.

In regards to how widely publicized weddings boost business, Bud Konheim, president and chief executive officer of Nicole Miller, said, “As far as I can look back, to Bess Truman, all of this has an effect on selling clothes. It changes things because we get more interest in simple wedding dresses, which we already make.”

Industry executives delighted in the prospect of how the fit, fashion-minded and ever-smiling Middleton sisters may continue to spark trends in the years ahead. And the Internet and the paparazzi will certainly ratchet up their exposure in a way that even the much-photographed Jacqueline Kennedy and her sister Lee Radziwill never could have imagined.

“In the future, anything Kate wears will be a home run,” said Michael Ruff, president of the New York-based label Cachet Industries. “This is going to be fabulous for business.”

Meanwhile, the British monarchy’s all-out affair has some designers like Prabal Gurung considering diving into bridal. Sources say Dennis Basso will be introducing a bridal collection later this year.

As for how all the hoopla will shake out in terms of bridal sales, Carolina Herrera said, “I don’t know that one dress will change everything, but it will help. Maybe people at last will change from strapless gowns to long sleeves.”

Other designers focused on immediate trends from Friday’s nuptials, such as the stovepipe sleeves that Lela Rose singled out. Vera Wang said Monday, “The fact that Kate’s dress was very covered will spark a trend. There will also be more all white wedding parties, which I happen to adore! Perhaps long lace sleeves will also impact bridal designs.”

Oscar de la Renta offered a different prediction: “I suppose there are already 20,000 copies being sold in Brooklyn. I think we will see more dresses in lace or faille that are extremely traditional.”

Monique Lhuillier isn’t convinced brides-to-be will spend more for their gowns, since most are already “pulling out all the stops for that day,” but the look will be a little more regal and will refer to Kate Middleton’s style when shopping in stores for wedding gowns, she said.

Mark Ingram, who runs a signature boutique, said, “There will be a move from strapless dresses to more elegant classic dresses which we had already bought.” Monique Lhuillier, Vera Wang and Lela Rose are a few of the resources that have dresses in this vein, he said.

J. Crew’s head of bridal Tom Mora was impressed with the three-dimensional bustle of Middleton’s gown, which he said was reminiscent of Christian Dior’s 1948 Envol collection. But brides-to-be will more likely pick up on sleeves and the matteness of Middleton’s wedding gown, he said.

Some firms had the good fortune of already having dresses with sleeves, lace illusion and V-necks in their collections. Miller’s bridal line has a drape-necked style that is by chance similar to the one Pippa Middleton wore during the ceremony. That gown retails for $1,500. With 50,000 weddings being held in the U.S. every weekend, Konheim noted his company only needs to tap into a small percentage of that figure “to keep really busy.”

Helen Rose designed Grace Kelly’s wedding dress, but the princess first wore a similar illusion lace style in 1954, thanks to her paramour Oleg Cassini. (The princess-to-be wore that dress when she set sail for Monaco to wed Prince Rainer). Given that heritage, Oleg Cassini Inc. has three lace illusion wedding dresses in its current collection. While live-streaming coverage of the royal wedding on its Facebook page, David’s Bridal featured one of those Cassini dresses to represent the retailer’s current assortment of Kate Middleton-type dresses.

Oleg Cassini is banking on an uptick in more formal weddings. The label’s sales are currently running 20 percent ahead of last year and should get a further boost, said director of sales Peggy Nestor. As for Pippa Middleton’s ripple effect, Nestor said, “Queen Victoria set the tone in her wedding for her bridesmaids to wear white, and we will see this as a trend, including the more form fitting sheath look — body dressing.”

As luck would have it, Middleton’s second dress — a strapless style with a crystal-accented waistband — looked similar to a $1,995 silk organza ballgown that Theia introduced during last month’s bridal market. That gown will hit stores in August.

Pronovias left nothing to chance, opting to have creative director Manuel Mota design three gowns inspired by Middleton — before the wedding even took place. His creations were showcased in an installation in the company’s London store April 28.

Other resources held off to whip up more literal interpretations of dresses from the royal wedding. David’s Bridal is designing a gown directly inspired by the one Middleton wore, as well as other styles incorporating some of the signature features. Having seen greater interest in white bridesmaid dresses in recent years, the retail chain expects its DB Collection offerings to drum up more sales since Pippa Middleton wore white.

By Sunday, JS Collections had cooked up “The Duchess Gown,” which was available for presale at nordstrom.com for $698. Sales were expected to get a lift in the days ahead, since “Access Hollywood” and “Extra” planned to mention the design on air Monday, a company spokeswoman said. Another label, Mori Lee by Madeline Gardner, had her own knockoff ready by Friday afternoon. “We added some beading to the lace to give it some sparkle in their windows, and are having 50 gowns produced almost overnight in China for store windows. We’ve had a phenomenal response so far over the weekend. We’ve already sent orders for the gown overseas, and hope to have them ready in stores in three weeks,” says Madeline Gardner, designer of Mori Lee by Madeline Gardner, New York.

There has not been this much excitement about a dress since Carolyn Bessette wed John Kennedy in a Narciso Rodriguez slipdress in 1996, said Ruff of Cachet. And thanks to Friday’s double-barreled celebration and Pippa Middleton’s fashion statements, executives have a bevy of trends to choose from. In late June, Cachet will start shipping Pippa-inspired dresses — both the white drape-necked wedding one and the green satin gown she wore Friday evening — that will retail for $180. The label will also introduce party dresses with necklines, sleeves and lace reminiscent of the royal bride’s gown. Ruff expects to sell “thousands of units” of these styles and “it could be much more.”

These dresses translated well for the mass market, which is not always the case with big moment or red-carpet dresses, he said. And Cachet’s 100-plus retailers have been ready and waiting. “There is a lot of interest from stores. Every retailer wants to put it on their Web site.”

Kimberly Lee Minor, chief fashion strategist for Priscilla of Boston, expects Pippa Middleton’s dress to have an even greater impact on wedding gowns than bridesmaid dresses. “It will influence bridal to a larger degree as brides looking for something chic and simple might decide a dress like Pippa’s is perfect for their weddings,” she said. “I am sure we will see some women opting for white for bridesmaids as well, not traditionally a popular color in this country for bridesmaids.”

Kate Middleton’s ballgown-skirted dress also may sway brides-to-be who might have been on the fence about buying a true wedding gown, she said. “This was a tipping point for sleeves. Brides will be influenced by the long, sheer sleeves as well as the modern ballgown skirt. Kate stayed true to herself with this gown and I believe that is the most important thing a bride can do,” Minor said.