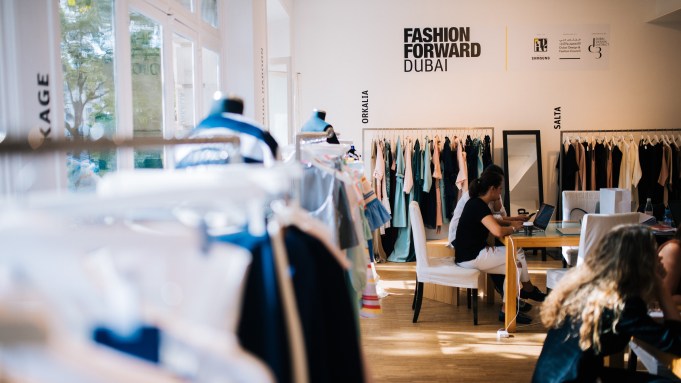 The showroom extension marks the first time the designers are collectively going outside their home market. “This is a milestone step to bring them to Paris, in one of the most strategic areas during Paris Fashion Week,” said Bong Guerrero, chief executive officer and cofounder of Fashion Forward, speaking from the showroom in Paris.

The showroom initiative is part of the organization’s Empowerment Program Through Industry Collaboration, or EPIC, sponsored by Samsung, which is aimed at further developing Middle Eastern designers. “One of the key pillars of Fashion Forward, when we first launched three years ago, was to bring visibility to designers in the Middle East. Another was to help ensure their commercial viability and success. Bringing them to a new audience in Paris is a key step in building bridges.”

The region’s designers are welcoming the opportunity to expand their audience. Handbag designer Galayini, said, “If young Middle Eastern brands truly want to resonate on a global scale, without an extortionate amount of money, a collective like this is key. By combining our efforts, we all stand to gain. That’s how the Antwerp Six took on the world in the Eighties, and today they are still reaping the fruits of that collective.”

Galayini added that while Dubai is a very international and cosmopolitan city, “within the global fashion industry, Dubai has yet to anchor itself as a fashion capital, and until that happens, the emerging designers will need to venture beyond and seek the attention of a potential audience.”

Creative consultant Muriel Piaser has been working with Fashion Forward on the selection of designers coming to Paris. “Those making inroads from the Middle East are a more daring group that appeal to a broader slice of the global marketplace. They have the right mix of local inspiration adapted to international trends.”

While she hopes many of the brands will attract the attention of buyers, Piaser said the designers have a lot to gain from the interactions in Paris. “It will give them international buyer feedback which is a fantastic opportunity to progress and acquire their goal,” she said.