One unit, at the Time Warner Center in New York, reopened Tuesday and was designed to reflect the designer’s passion for sustainability. 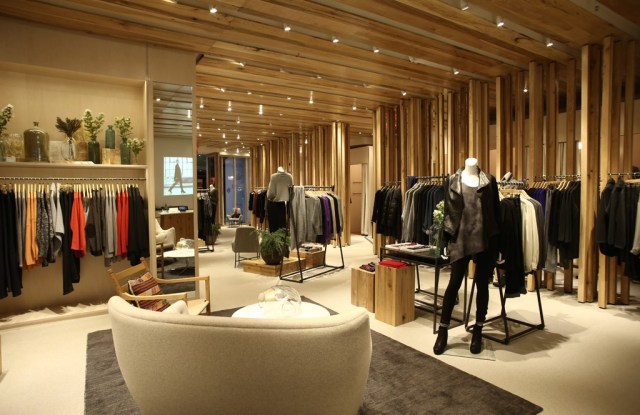 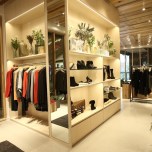 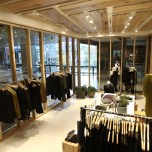 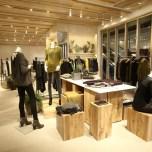 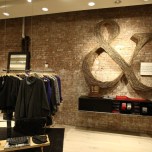 NEW YORK — Eileen Fisher is showing its experimental side.

The sportswear firm, which has 60 freestanding stores worldwide and expects to generate revenues of more than $400 million this year, has opened two new retail concepts. One unit, at the Time Warner Center at 10 Columbus Circle here, reopened Tuesday and was designed to reflect Fisher’s passion for sustainability. The second, at 166 Fifth Avenue, features an edgier new line called The Fisher Project, which will roll out to eight to 10 freestanding Fisher stores this spring, as well as key wholesale accounts.

“We’re bringing the space to a new level, which reflects the most important values of the brand,” said Jim Gundell, co-chief operating officer of Fisher, noting that the firm had a store in the Time Warner Center for 10 years and has signed a new lease for another 10 years. During the three-and-a-half months of construction, Fisher moved to a temporary space on the third floor. Fisher sought out an architect who was well-entrenched in the sustainability field. Ole Sondresen said he not only took into consideration the customers, but also the way the staff used the store.

For example, he designed the floor to be a mixture of soft rubber and cork, which makes it easier for the salespeople to be on their feet all day. The material also dampens noise in the space, creating a quiet environment within the bustling Columbus Circle mall. Reclaimed barn wood is used throughout the store, from the ceilings to wooden pedestals, to give a warm and inviting feel. Benches in the dressing rooms are made of 300-year-old heart pine derived from old buildings.

During the demolition of the previous space, existing materials were sorted and recycled or salvaged wherever possible to limit landfill waste. Further, no toxic glues were used, and all the paints and finishes have low volatile organic compound so the store doesn’t smell like a new store. “It smells like a totally natural environment,” said Sondresen. In addition, hangers are reused from previous stores, and the store uses energy-efficient LED bulbs to minimize energy consumption. “These lamps won’t have to be changed for 20 years,” said Sondresen. He said the LED lights use 90 percent less energy than normal lighting. “The electric load will drop 75-90 percent,” he added.

Gundell also noted that very few garments are shipped on hangers from their manufacturing facility. This way they don’t have to throw out a lot of hangers that aren’t floor-ready.

An open floor plan was designed to give Fisher’s clothing an airy and bright environment. “We wanted the clothes to be what you saw first,” said Rebecca Perrin, co-chief creative director at Fisher. “They really live beautifully within the architecture.”

In 2009, Fisher began working with Bluesign Technologies. As of spring 2012, all of its China silks are Bluesign certified, which means they are dyed and finished using fewer chemicals, less water and less energy. Fisher started with silks, and now they’re leveraging Bluesign with other fabrics. Some 27 percent of the Eileen Fisher line uses sustainable fabrics. The store’s merchandise retails from $50 to $800, with the average retail price point around $175. Fisher’s target customer is age 40 and up, said Gundell. Fisher doesn’t have a prototype store and considers each location individually, said Jena Pace, director of store planning and logistics.

Fisher started using mannequins for the first time on the selling floor this year. “The clothes came alive more and you can see the clothes on a body. It also gives us an opportunity to highlight the shoe collection,” said Perrin. The Time Warner unit also has a big video screen on the back wall in front of the cash desk, showing highlights of the collection. In order to appreciate the unusual shapes and styles of Fisher’s designs, the retailer doesn’t display all the sizes it has in stock, but instead will randomly choose three sizes so the customer can appreciate and see the design. Fisher participates in a Green Eileen program, where it will reward customers with a $5 gift card if they bring back a gently worn Eileen Fisher item from their wardrobe to the store.

Fisher’s second project is its redesigned unit at 166 Fifth Avenue, which reopened at the end of August and features the capsule collection The Fisher Project. “It pushes the edge more, there are more backless looks, there are very skinny spaghetti-strap camisoles, it’s more adventurous,” said Perrin. She said the Fifth Avenue store serves “as a living lab and a place to try out merchandising concepts.” The renovation, which was done in three weeks, included exposing an entire brick wall, which is now a main feature of the decor.

In addition to The Fisher Project collection, the 2,400-square-foot store showcases the Covet Collection of hand-selected jewelry by local artisans and the exclusive 111 Collection, which consists of one-of-a-kind Eileen Fisher pieces that the Fisher team created but that didn’t make it into the collection. “It adds a texture to the store, and we have to stock it between every two to three days,” said Tracy Breslin, director of merchandising at Fisher, describing the fast sell-throughs.

The Fisher Project capsule collection contains 30 pieces, including tops, jackets, sweaters and dresses that can be worn alone or integrated into the Eileen Fisher line. Among some of the highlights are a sheer, racer-back, drop-waist tank in nude; mosaic print slouchy pants; jersey drawstring harem shorts; chevron print pleated shorts, and a bateau neck sweater with cutout neckline and dolman sleeves. The capsule ranges from $148 to $1,098.

Besides the Fifth Avenue store, The Fisher Project is presently carried in an outpost on the second floor of Bloomingdale’s 59th Street store, as well as Bloomingdale’s units in Chicago; San Francisco; Santa Monica, Calif., and Boston. For spring, it will roll out to Neiman Marcus, Saks Fifth Avenue and Nordstrom. After a soft launch, they will add a Fisher Project hangtag in the spring, and a full label in the fall.

Breslin said even though social consciousness is a very popular trend right now, Fisher has been doing it very quietly and it’s part of the company’s DNA. “We consider ourselves pioneers in that area,” she said.

Gundell said since they relaunched the Fifth Avenue store, “results have been phenomenal. The last eight weeks, sales have been up 17 percent,” he said.

Fisher, whose sales have increased 25 percent in the last two years, has also been scouting more retail locations. It recently signed a lease for Brookfield Place in New York’s Financial District, and will open a store on Robertson Boulevard in Los Angeles this spring. It is looking for a location in Brooklyn and for more stores in London. In Canada, it has a franchised arrangement with Se Ce Apparel, its distributor, and has stores in Vancouver and Calgary and is aggressively looking in Toronto, Montreal and Ottawa. The company has seven stores in New York City. E-commerce, which it launched more than 10 years ago, is seven times the size of its largest-volume store, said Gundell.