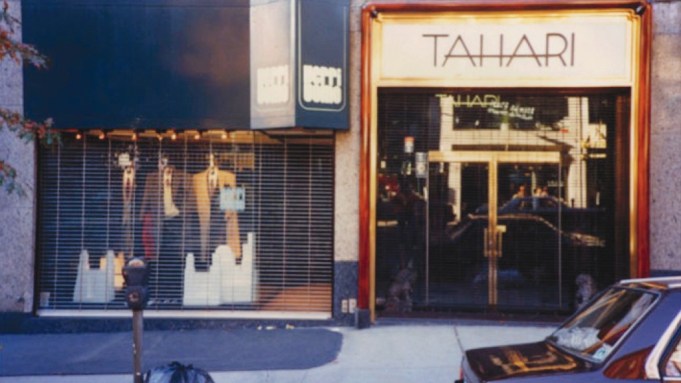 1971
Elie Tahari moves from Israel to the U.S. and eventually gets work in New York’s Garment Center as an electrician’s assistant.

• The designer opens his first boutique on Madison Avenue.

• Tahari is admitted to the Council of Fashion Designers of America.

• The designer goes to the White House and meets with the Clintons.

1996
Tahari moves into new digs in the Grace Building on West 42nd Street and initiates a major expansion campaign, including licensing, international sales and a fragrance.

1997
Tahari teams with Andrew Rosen to launch Theory, a line of stretch sportswear that hits stores in February.

• The company signs a deal for leather and active outerwear with Synergy Sport International of Hong Kong, and for a line of hats with Forget-Me-Not Hats.

2002
Fabien Baron redesigns the logo as the company name changes to Elie Tahari.

2005
A freestanding store bows in Atlanta, followed by Boston a year later.

2006
The launch of the men’s wear collection and women’s accessories with shoes and belts.

• Tahari sues his former business partner Rosen and 10 other defendants in New York State Supreme Court in a dispute over the sale of Theory. Ultimately, the case was settled out of court.

2007
The company opens its European headquarters in Milan, and a store in East Hampton, N.Y. In-store shops open at Saks Fifth Avenue in Beverly Hills and Bloomingdale’s in San Francisco.

• Women’s outerwear in partnership with S. Rothschild and the T Tahari line launch.

• A freestanding boutique opens in Boca Raton, Fla., and in-store shops bow in London and Russia.

2009
• Tahari designs a limited-edition bicycle with proceeds going to Matthew Modine’s charity Bicycle for a Day.

• The company opens in-store shops in Korea and Paris.

• Men’s dress shirts and ties are introduced in partnership with Phillips-Van Heusen.

• Tahari’s iPhone application for the fall collections makes its debut.

2010
The designer holds a fall runway show for the first time at Bryant Park as part of Mercedes-Benz Fashion Week.

• A men’s suit collection is introduced in partnership with Peerless Clothing.

2011
• Freestanding boutiques open in Washington and Dallas, and expanded in-store shops open with Neiman Marcus in Dallas, and Bloomingdale’s in New York.

• Tahari collaborates with actress Emmy Rossum to create the Emmy Bag to benefit Safe Horizon, and the designer partners with Jennifer Hudson and Saks Fifth Avenue for Key to the Cure benefiting Women’s Cancer Research Fund.

• Tahari takes a stake in Catherine Malandrino to expand the brand with a diffusion line, new product categories and in international markets.

• The designer is honored by Worldwide Orphans.

2013
An eyewear collection and men’s furnishings are introduced.

• The company sells a majority stake in Catherine Malandrino to Bluestar Alliance.

• Sept. 4 is designated Elie Tahari Day by the City of New York, in recognition of the company’s 40th anniversary.