The artwork of John Lennon is featured in a new men's apparel line. 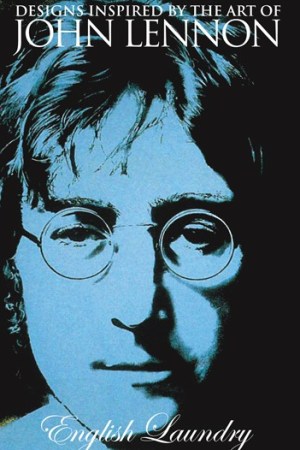 Sportswear maker Rock and Roll Religion, owner of the English Laundry label, has signed a three-year license to market a men’s collection featuring the artwork and imagery of John Lennon.

The collection includes woven shirts, knits, T-shirts, blazers, jackets and neckwear, which all retail from $30 to $170. Lennon’s artwork is incorporated on packaging, hangtags, neck labels, accents on sleeves, jacket linings and graphics on shirts and T-shirts. Snaps on shirts and jackets are etched with peace signs.

“Everything is based on the clothes that John wore in the Sixties, so there are tab collar shirts and short round collars,” said Christopher Wicks, chief executive officer and creative director of Los Angeles-based Rock and Roll Religion. “For next fall, we hope to add a Chelsea boot inspired by the ones that John wore, if the design and style is approved by Yoko and her team.”

The agreement was brokered by Live Nation Merchandise, which serves as the licensing agent for Bag One Arts, the entity owned by Yoko Ono that oversees rights to her late husband’s artwork.

Wicks said Ono and her management team are closely involved with approving designs in the apparel collection, which is sold under the label “Designs Inspired by the Art of John Lennon by English Laundry.”

The line debuted with an initial offering of about 15 designs this holiday season at Macy’s Herald Square, Hard Rock Hotel shops and the English Laundry stores on Melrose Avenue in Los Angeles, Beverly Hills and Shanghai. The collection will double in size for spring/summer, Wicks said.

The new offerings will be introduced at the Bread & Butter, MAGIC and Project trade shows.

“I’ve been a fan of John Lennon since I was a child and I’m humbled to be working with his estate on this project,” Wicks said. “I’ve been trying for the past six or seven years to obtain this license.”

The English Laundry license is the latest of several that Bag One Arts has inked in the fashion space. In 1999, a group of children’s companies, including Carter’s, signed several agreements for apparel, shoes, bedding and toys that used Lennon’s whimsical illustrations for product sold at Macy’s, J.C. Penney and the now defunct May Department Stores. According to Signature Networks, which oversaw the program, the merchandise rang up more than $150 million in retail sales within a year.

Rock and Roll Religion has made several celebrity-related fashion deals in the past year. The company launched men’s lines with musician Scott Weiland and actor Charlie Sheen. Its other labels include The Jimi Hendrix Experience, Fender: The Clothing Collection and DaVinci California.