Serge Azria, owner and creative director of the contemporary label Joie, rolls a red-colored rock in his hands as a reminder of what he wants for his... 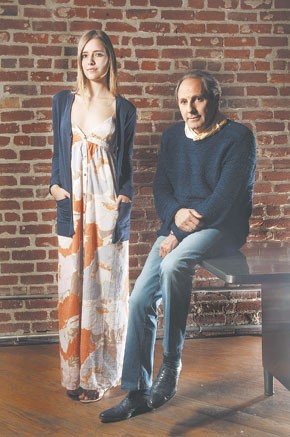 VERNON, Calif. — Serge Azria, owner and creative director of the contemporary label Joie, rolls a red-colored rock in his hands as a reminder of what he wants for his company: passion, strength and excitement.

That’s the mantra as six-year-old Joie, which is based here, launches retail stores in the U.S. and Japan and expands into accessories, shoes and a girls’ clothing line called Petite Joie.

The brand’s growth comes as several companies in the contemporary market try to evolve into lifestyle brands. This month, New York-based VCS Group acquired a majority stake in Development Clothing LLC, based in Los Angeles, to help it add accessories and footwear. Poleci and Seven For All Mankind, among others, also aim beyond their core offerings of sportswear and denim.

Determined to keep Joie in his sole ownership, Azria, 62, the older brother of Max Azria, who heads the BCBG Max Azria Group empire, said the challenge is to establish the brand beyond apparel. Shoes, introduced this fall, range from metallic ballet slippers to suede knee-high boots and wholesale from $65 to $190; they were picked up by retailers including Belle Gray in Sherman Oaks, Calif., and Saks Fifth Avenue. Azria said Joie is profitable, with sales growing at least 20 percent annually.

“I don’t want to make a revolution [but] an evolution,” Azria said of his strategy for new categories. “If it’s not perfect, if I don’t love it, I don’t do it.”

Petite Joie, which wholesales between $26 and $63, will launch next spring in Barneys New York and Lisa Kline in Los Angeles, among other retailers. Azria said he aims to introduce one handbag style within a year.

The new businesses will complement the women’s apparel line, which wholesales from $48 to $220 and produces four collections a year for more than 400 specialty and department stores, including Neiman Marcus, Nordstrom and Bloomingdale’s. Outside the U.S., Joie is sold at 20 locations, including Holt Renfrew in Canada, Pink Zebra in Australia and Couture Ltd. in Russia.

The foreign market was the first test for Joie’s retail strategy. The brand’s Japanese licensee, Link Theory Holdings Co., opened a Joie shop in Tokyo’s trendy Omotesando Hills last April. Though Joie’s first store is just 400 square feet, Azria said it generates sales of more than $2,000 a square foot. Ten more stores are planned for Japan in the next two to three years, he said.

Regarding a flagship on Joie’s home turf, Azria said he is considering locations in Southern California, ranging from Malibu and Los Angeles’ Robertson Boulevard to Santa Barbara 100 miles north. The goal is to close a deal by next summer. One site that isn’t on the radar is Rodeo Drive in Beverly Hills. “It’s good to be different,” Azria said. “The Joie girl doesn’t shop at Rodeo Drive.”

Based on a fictitious questionnaire that the company created, the Joie girl is an avid traveler who admires Debbie Harry, Brigitte Bardot and Björk and espouses an effortless beauty. Targeting such a customer with relaxed yet feminine clothes that can be easily layered in a neutral palette of black, white and olive, Joie first staked a claim in the contemporary sector with comfy cargo pants that were given names like So Real and Breathe. It took two to three years for Joie to wean customers and retailers off those baggy bottoms by offering cashmere sweaters, washed cotton dresses, bohemian tops and other sportswear, Azria said.

“Whether we are doing a T-shirt or a dress, I give value for the price,” Azria said.

Azria started working in the fashion business at age 16, importing Kenneth Jay Lane’s jewelry to Paris and showing them to designers like Yves Saint Laurent. A year later, he started an apparel company called AZ3, where he was joined by his brother Max.

Serge Azria then sold one of his first hit items, a black-and-white smocked dress, to retailers such as Harrods in London. Years later, he teamed with Vince Camuto at VCS and launched accessories and footwear for BCBG.

“It’s interesting how fashion moves and doesn’t move at all,” Azria said. “I work today in the same way I worked 35 years ago.”

To be sure, Azria has had to adjust to some fundamental changes in the contemporary market. Eighteen months ago the competitive category began diverging into two directions: one moving lower-priced products sold at high volume and another emphasizing better quality and fabrications. The impetus for the shift was the flood of collaborations between designers and international chains, such as Viktor & Rolf with Hennes & Mauritz and Rodarte with Gap.

“Suddenly you have all these designer products at a very low price with fashion in it,” he said.

Cutting prices in a bid to boost volume wasn’t an option at Joie. It would “kill the charm of the brand,” potentially damaging its cachet in Japan and with prestigious retailers, including Bergdorf Goodman, Azria said. Instead, taking the route toward better quality, Joie incorporated silk chiffon and hand-washed silk de chine into its array of denim, twill and voile. As a result, the brand reduced the percentage of denim and twill in the line to less than 15 percent, from 80 percent during the cargo pant’s heyday. Next spring, Joie will offer dresses with hemlines falling to the floor and introduce a linen jersey that will be fashioned into slouchy cardigans and Henleys with three-quarter sleeves.

“They’re constantly changing up their styles,” Alana Goldsmith, the New York-based buyer for denim and contemporary apparel at Shopbop.com, said with approval.

After picking up Joie in 2001, Shopbop.com scored with the So Real pant and kept working with Joie well after Rucker and Barron departed. The reason: Joie consistently identifies a trend and offers unique styles that are priced competitively, Goldsmith said. For instance, during this resort season, when many other vendors promoted dresses, Joie had tops that can be easily tucked into high-waisted trousers. One of Shopbop.com’s bestsellers is a square-neck cotton camisole retailing for $173 with silk banding at the top and bottom hems and for the lining.

“There are definitely a lot of brands now in our market,” Goldsmith said. “It’s about focusing. Joie always has that ‘It’ item of the season.”

For Azria, there is no other way. “If there’s no creativity, there’s no place for anyone in contemporary,” he said.