Buyers were gravitating toward booths that had something new and colorful. 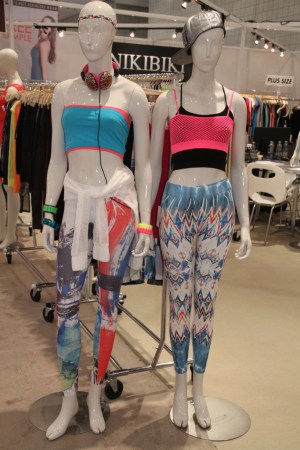 Traffic at the recent Edit, Stitch, Moda Manhattan and Fame shows at the Jacob K. Javits Convention Center and Pier 94 in New York showed that buyers were definitely looking for anything new and colorful for their stores.

For the most part, those showing at junior and young contemporary show Fame said traffic was either “good” or “very good.” Many representatives of brands showing at lifestyle and contemporary brand-focused Moda Manhattan described the overall traffic as “steady.” For the most part, those booths that showed brightly colored merchandise seemed to have a higher volume of traffic.

At Stitch, which had its second outing showcasing accessible luxury brands, traffic was consistent, although the volume of traffic didn’t seem as busy as at Moda.

Edit, the relatively new show for the premium luxury market in which attendance was by invitation only, saw higher traffic from the year before.

Britton Jones, president and chief executive officer of BJI Fashion Group, which operates the shows, said about Edit, “Our invitation-only, carefully credentialed buyer traffic mushroomed by 106 percent. We also experienced explosive growth in international attendance as it increased by 70.3 percent.”

Of Moda, Fame and Stitch, Jones said, “The robustness and strong draw of this market is highlighted by the fact that we were shopped by buyers from 70 different countries and 48 states.”

At Fame, in which an energetic vibe was felt throughout the venue, booths showing denim and bright cheery colors were where buyers were congregating.

Rosanne Vitale, the sales representative for Kensie Jeans with the Mamiye Group, said in juniors denim, “destruction is a big trend that has not gone away.” A big seller for the Kensie brand is a jean with a 28.5-inch inseam the company calls the “ankle biter.” The company works with different washes each season to freshen up the line. Also selling well is a “skinny” jean with a 30-inch inseam. Colored denim is still in vogue, but in subtle shades versus the brighter tones from prior seasons. The jeans on average wholesale for $44 a pair, with retail in the $88 range. The brand also markets denim jackets, which have a wholesale starting price point of $39.

At Nikibiki, sales associate Esther Pio was highlighting the new activewear line that began shipping last October. The line was full of pops of bright color in different style options meant to be layered. The collection is made of a nylon-spandex blend. Camisole tops were $5 wholesale, with a wide-strap tank slightly higher at $6.50.

While color got the attention of buyers at Moda, it was anything that was both unique and colorful that drew them into discussions with the sales teams representing the different brands.

At the Pure Handknit booth, Pete Casagrande for Pure & Co. was showing relaxed cowl sweaters for fall. “The sweaters are 100 percent hand-knit to order. I have 4,500 knitters in Thailand. These are super soft in cotton and have a relaxing, forgiving fit,” he said. They average $55 wholesale. It takes about 90 days from order to receive the products.

Patty Kim, who designs for her own brand, was showing Asian-influenced reversible quilted jackets with a French collar and mother-of-pearl shell buttons that wholesale for $86. The jackets are patterned on one side and solid on the other. Her booth had a steady stream of traffic, with buyers reaching for the brighter colored patterns, one in particular that was in turquoise.

At JudyP, owner Judy Petraitis said buyers were interested in the new colors in her line for tops and dresses. The popular V-neck top wholesales for $38, and the most popular color is blue, she said, noting blue is a “good color for most, even more so than pink.” And while she was showing a color palette that showcased chartreuse for spring, different shades of green were also extensively represented in the color options available for the product line.

At Stitch, Grace Townsend of Catherine Malandrino Indigo, the brand’s diffusion line, said denim was a key item for fall. Also getting the attention of buyers for the more casual line was a polyester-wool blend poncho wholesaling for $87.

Mark Miller’s M. Miller showed a short, cherry-pink, 80 percent goose, 20 percent down ski jacket, with a raccoon-trimmed hood that was getting the attention of buyers. The jacket wholesales for $425. The Boston-based firm’s roots go back to the Seventies as a fur manufacturer before branching out into outerwear.

Luxurious fabrications were the highlight at Edit, but the showstoppers were the ones in cheery brights or a color that one might not expect, such as the mauve shearling jacket from Desa.

One of the largest exporters from Turkey, Burak Çelet of Desa, was showing a selection of apparel and fun leather and fur jackets in unusual hues. One that got the attention of the crowd was the mauve shearling jacket. The company operates two stores in London and 80 in Turkey. Wholesale price points for the shearling and leather averaged $829.

At Roschterra, the standouts were rabbit fur coats, although a few were more jacketlike in length, that featured animal faces in different colors as a playful accent on the coat. The fun, short leather jackets, mostly moto in style, were the ones featuring abstract designs to give the look a little more zip than the basic black that’s more commonly shown in the stores. According to cofounder Myriam Bensadon, the company is an American firm that works with designers in Spain, where the production is based. Many of the shorter jackets and coats had an average wholesale price in the $400-plus range.

At Shi London, designer Shi Nazemi was getting attention for a reversible brushed mohair tweed coat that wholesales for $880. She said the version in a black-and-white patterned tweed was perfect for New York, but buyers from the West Coast were eyeing the multicolored plaid, that featured mix of rust orange, shocking pink, lime, yellow and purple.